At AMD's GPU '14 press event, Dennis Fong took the stage and announced their latest Gaming Evolved App that would allow gamers to optimize their games with the click of a button and offer rich social experiences. The man behind Raptr and the Gaming Evolved App, Dennis Fong is also the co-founder of Xfire which is still the most used IM and server browsing application used by gamers.

Raptr was initially introduced in 2007 as a website as a social networking website built exclusively for gamers and the application was made public in 2008. The Raptr application brought some cool new features for gamers, one of them was to track gameplay time which became one of my personal favorite features of the application when i started using it in 2010. We will detail these features shortly as you continue reading onward. 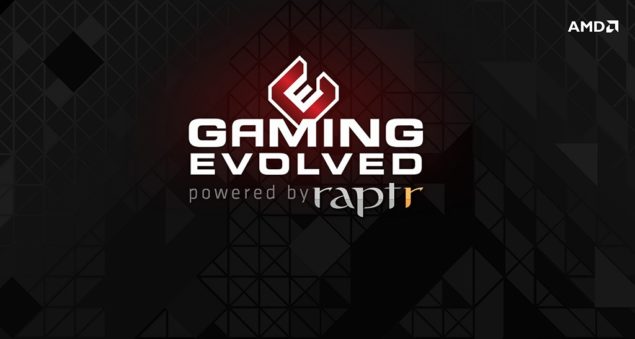 The Idea Emerges By NVIDIA In the Form of GeForce Experience

In late 2012, NVIDIA introduced their GeForce Experience application which provided gamers a key feature that was previously missing from gaming applications, that was the ability to automatically configure settings for any specific game with the hassle of doing it manually. Since their introduction, PCs have allowed users to manually adjust and tweak visual parameters of a game with a variety of settings. These may include Texture, Lightning, Anti-Aliasing, Anisotropic Filtering, DOF, Resolution and more. This is the single biggest advantage PCs have had over the console but for some, just poking around with the tons of settings can be a tiresome job. The GeForce Experience application made this job easy for users letting the GeForce servers upload a list of pre-defined settings into the users PC based on his specifications so that the game looks good and at the same time runs great too.

However, as an application there wasn't much to the GeForce Experience app however ShadowPlay is soon to be introduced into it which would allow DVR-Type Recording Of Gameplay and ease of sharing with friends. NVIDIA gave gamers and the industry a cool new idea and its Raptr which would take it to the next level with the Gaming Evolved App built with AMD.

A few months after NVIDIA's GeForce Experience, AMD introduces their Gaming Evolved App built by Raptr that is the most feature rich application ever built for PC gamers. Its all your social experience in one place and its alot more than just being social. The Gaming Evolved Application configures your game settings automatically, let's you showcase your achievements, record your gameplay time, imports your PSN/XBL/GFWL/Steam profile data in one place. Let's break apart all of the features of the Gaming Evolved app to learn more about them. Some of the key features we would be explaining in this preview include:

Widgets: Thanks to the integrated widgets gamers can broadcast live video via Twitch, watch streams, take screenshots, and share them on Raptr, Facebook, and Twitter without ever leaving their game, with just a couple of clicks.

You can download the Gaming Evolved App over here.

The main feature of the Gaming Evolved App is to optimize games in a easier manner. This is done with a built-in utility that first detects for supported hardware and then loads a basic configuration based on your PC hardware to be used in the game. You have the option to choose from three presets - Quality (For best graphics), Balanced (For a mix of good visuals and stable frame rates) and Performance (For max frame rates). Each hardware would result in a different set of configurations for each presets. 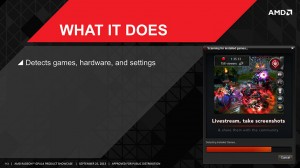 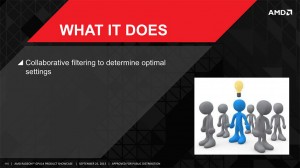 In case you have a high-end card, you will notice a larger difference when changing from high performance mode to high quality mode. The difference would be minor in the case of entry to mid range hardware. Its a good tool but let's move on to what else the utility has to offer.

The data for the games and settings is gathered when you login to the Gaming Evolved App and it detects the games installed inside your PC. After this, the app analyzes the system configuration on whose basis it determines a pre-defined configuration set for games. 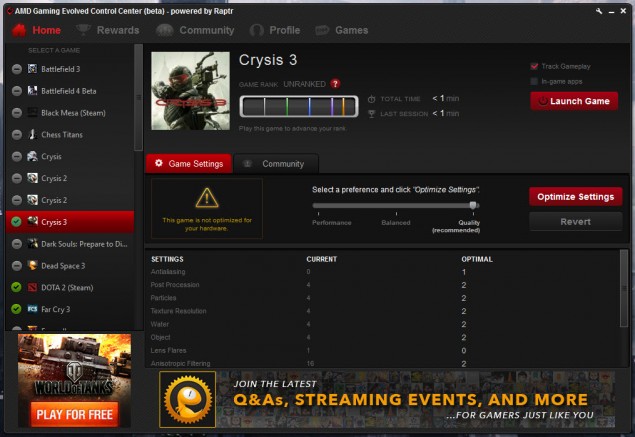 Social Experience Taken To The Next Level

The Gaming Evolved App combines with the configuration utility all the old features the made Raptr great. Those are the integrated IM applications that would let you chat with friends across various social platforms such as the Facebook, XFire, MSN, Steam, Gmail. PSN, XBL, etc. 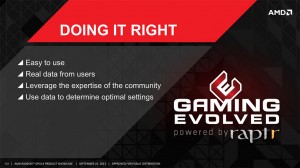 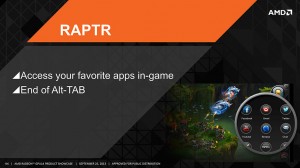 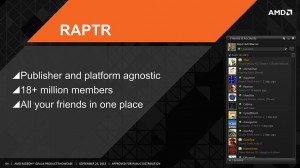 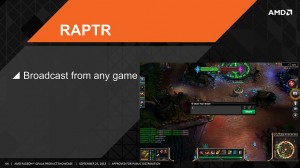 Additionally, the application has a built-in community page with a dedicated page to each gaming title so you can discuss, talk and share your opinion about the game at its own page. With so many features integrated into the app, gamers would be spending less time Alt tabbing out of their games to reach Facebook in a separate browser or talking with friends through various other Instant messaging applications. 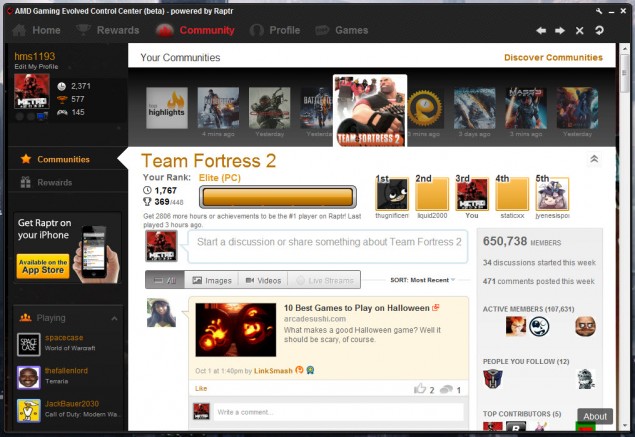 Broadcast Your Games With Twitch

Very Recently, EA gave the ability to their Origin platform users the ability to broadcast their games through Twitch without the need to use any external application such as the commonly used XSplit. This made game streaming with EA games much more easier. 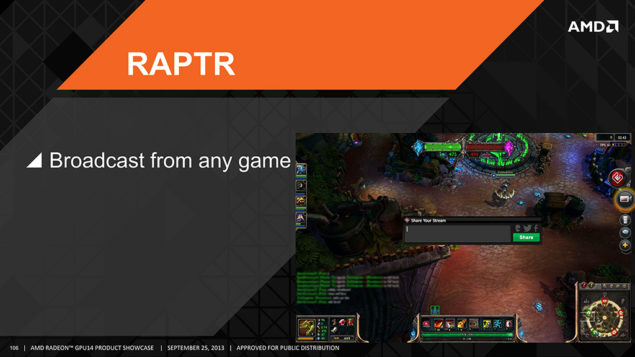 Raptr now brings the widely popular Twitch broadcasting service to their own Gaming Evolved App which would give users the ability to stream their videos on Twitch.TV which has grown tremendously over the last couple of years.

We tried to test it out, unfortunately the feature was still in BETA phase as is the Gaming Evolved App itself so we weren't lucky enough to get it to run but hopefully when the app goes out of BETA, it would be more tweaked for us and the gaming community to use. 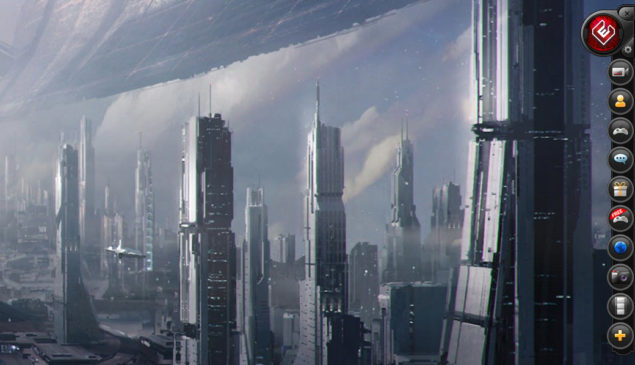 Last of all, the AMD Gaming Evolved App allows gamers to import the data off of their PlayStation Network, Steam and Xbox Live profile and share their trophies and achievements in one single place. But that isn't it, you can also check and compete against your friends to see who has the most trophies for a certain game. The app also tracks game-play time so if you have over 100 hours in Skyrim or Battlefield, your friends would know that you are a true Elite gamer. 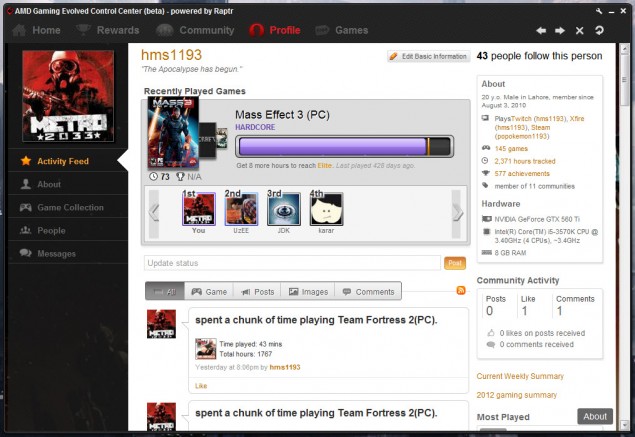 As we end up our preview, the last feature i will detail about the Gaming Evolved App is the FPS Historogram. I was unable to use it in the BETA since it isn't yet available but once the BETA is over, users would be able to record the FPS of any game and Raptr would gather the FPS data acquired during the playtime and sum it up in a historogram to see what kind of FPS you got in the game at different time periods.

This tool would be great for the benchmarking community who have to record FPS of a certain game to evaluate average scores.

You can see for yourself in the following screenshot that how the Gaming Evolved App manages the achievement, trophies and gameplay record in such an organized manner comparing it against your friends over several other gaming platforms. 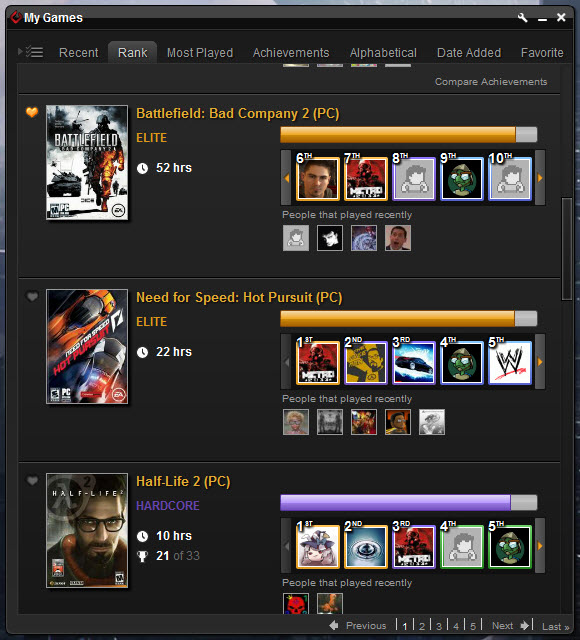 The AMD Gaming Evolved App by Raptr is definitely something to look forward to not only by AMD gamers but their entire PC gaming community. The GEA 'Gaming Evolved App' is currently in BETA so there might be a few issues here and there but entering the BETA allows you to help out the team at Raptr optimizing the experience you get in the final built. So make sure to download the app from the following link, sync it up with your profiles and enter in a whole new PC gaming experience.