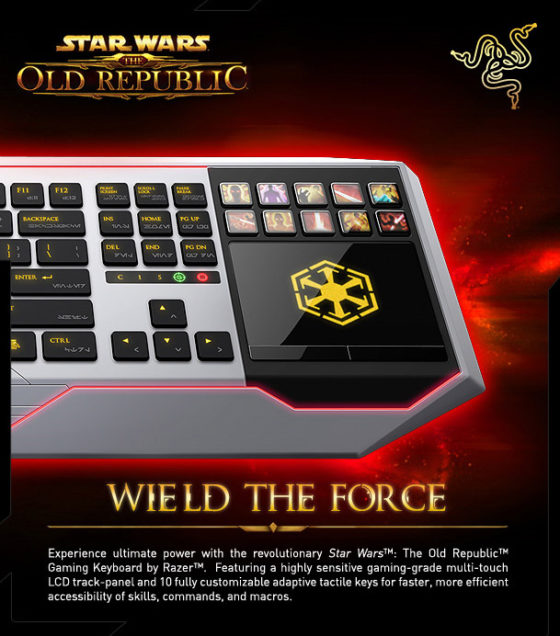 Branded under the STAR WARS : THR OLD REPUBLIC game, Razer has now announced yet another Razer Keyboard themed after the game that looks and feels intergalactic in terms of looks! With for the first time a user controllable multi-touch track panel with and dedicated keys for the game that can be used for faster and more efficient accessibility of skills, commands and macros along with 10 other tactile keys. Did I mention the colors change too on this beautifully crafted keyboard! 😀

A new way to experience the world of Star Wars™: The Old Republic™ with game information, music, interchangeable faction emblems and much more vibrantly displayed on the full color LCD track-panel. With highly sensitive multi-touch support, you can even record macros right on the panel so you're armed for complete destruction of your opponents instantly.

A true Jedi or Sith master thinks quickly on their feet, adjusting Force abilities and lightsaber stance to suit each fight - making them highly revered or feared combatants on the battlefield. With the dynamically changing adaptive tactile keys on the Star Wars™: The Old Republic™ keyboard by Razer, put more skills and macros within quick reach so you're always equipped right for each battle to emerge victorious every time.

Just as smugglers fast draw their blasters to shoot enemies dead before they can react, the resplendent gold backlit slim key caps on the Star Wars™: The Old Republic™ keyboard by Razer allow faster actuation and shorter travel distance. This keeps you many steps ahead in combat, the decisive edge for surviving in the far reaches of the galaxy.

Record unlimited macros on-the-fly without taking an eye off the game and immediately change between up to 10 profiles without the hassle of going into the driver software. 5 additional macro keys on the side further expand the number of easy-to-reach commands at your fingertips.

Whether blue for the Galactic Republic, red for Sith Empire, or even green like a Jedi's lightsaber, customize the look of the Star Wars™: The Old Republic™ keyboard by Razer with multi-color LED lighting to get a unique look and style on your ultimate gaming weapon.