Sharkoon has announed the availability of two external SATA RAID cases that are of a matte black metal look design that offer multifunctional configurations that minimize the possibility of failing hard drives. These would have a 3.0 USB interface in the 2-Bay Raid Box, while also along with eSATA in the 5-Bay Raid box. 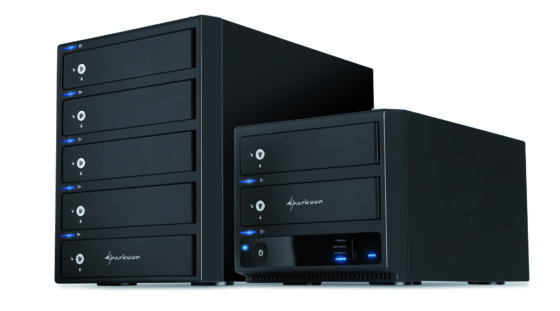 The Sharkoon 2-Bay RAID Box offers two lockable Hot Swap bays for 3.5 inch SATA hard drives, each with up to 3 Terabyte storage capacity. The inserted data medium can be operated in RAID level 0, 1 or JBOD. The desired mode can be selected through a switch on the case's front. Blue LEDs display operation, data transfer and the selected RAID mode. Cooling is ensured by the 70mm fan on the backside. For external connection, the 2-Bay RAID Box provides a USB3.0 interface. The case measures 215 x 130 x 120 mm (L x W x H) and weighs 1926 grams. An instruction manual, power cable, USB3.0 cable and two keys are provided within shipping.

For the connection of larger hard drives, the Sharkoon 5-Bay RAID box is suitable with five 3.5 inch SATA bays. The integrated RAID Controller supports Array Mode 0, 1, 3, 5, 10 and JBOD. Configuration takes place on the backside of the case. Two additional 60mm fans are also located there. The Sharkoon 5-Bay RAID Box can connect to a computer either through USB3.0 or over eSATA. The case measures 265 x 130 x 185 mm (L x W x H) and weighs 3470 grams. The shipping contents are identical to the 2-Bay version, however an eSATA cable is included.

With a consistent drop in HDD shipments, is the storage device about to become obsolete?