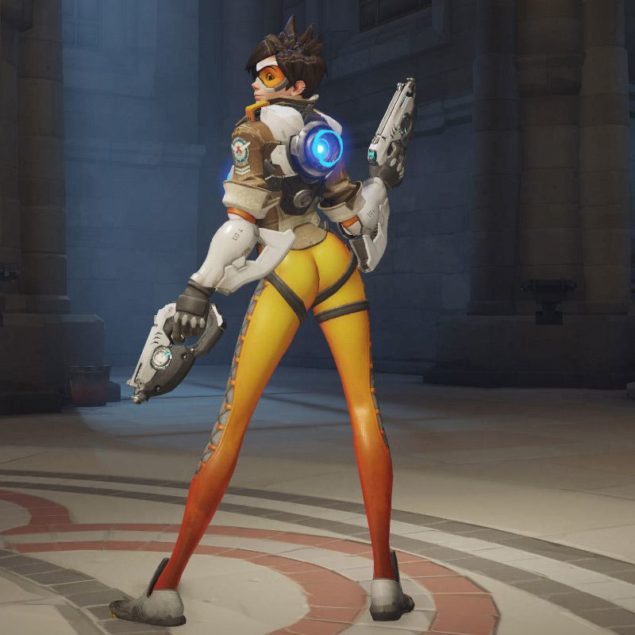 As a red blooded man, nothing is more attractive to me than... what? Legs? A bum crack? That pillar is looking a little bit phallic in the background.

Either way, Blizzard had the best intentions of women everywhere in mind when they removed the above pose from upcoming FPS title Overwatch.

One person - a guy, it seems - took issue with the pose.

"What about this pose has anything to do with the character you're building in Tracer? It's not fun, it's not silly, it has nothing to do with being a fast, elite killer. It just reduces Tracer to another bland female sex symbol."

Is it that flash of neck? There's no ankle on display, so it can't be that. There's clearly something in this picture I'm not seeing.

Blizzard decided this lone hero, who said he was doing it so that his daughter could have a role model, was right in his complaint. Overwatch creative director Jeff Kaplan said:

"That [the] pose had been called into question from an appropriateness standpoint by players in our community did help influence our decision -- getting that kind of feedback is part of the reason we're holding a closed beta test -- but it wasn't the only factor. We made the decision to go with a different pose in part because we shared some of the same concerns, but also because we wanted to create something better."

Now another gang of righteous warriors have decided it's time to take it one step further. Violence is strife in western society and, for the sake of our daughters, it seems only fair that we limit the amount of satanic content that may alter their fragile, play-doh brains.

So Blizzard is being begged to remove the guns from Overwatch, before somebody accidentally has unpleasant thoughts.

The petition currently has around 100 signatures - 100 times more than the original complaint - and so we should be expecting an announcement any time soon.

Snarkiness aside, if it's something they'd been unhappy with, it's hard to knock. Only removing it after this now very public complaint is not going to win them any fans, however.