You apparently haven't trekked properly, or at all, through the online gaming community if you haven't, even once, crashed into a PC vs consoles debate. This topic has always been the subject of discussion among millions of gamers present around the globe, and the cognition of how the latest PlayStation 4 and Xbox One consoles will go up against the forthcoming highly anticipated pre-built gaming PCs by Valve Corporation known as Steam Machines, only makes the PC vs consoles controversy grow bigger. Below is a basic comparison between the latest consoles and an entry level CyberPowerPC Steam Machine showing the latter is considerably superior in specifications and performance. 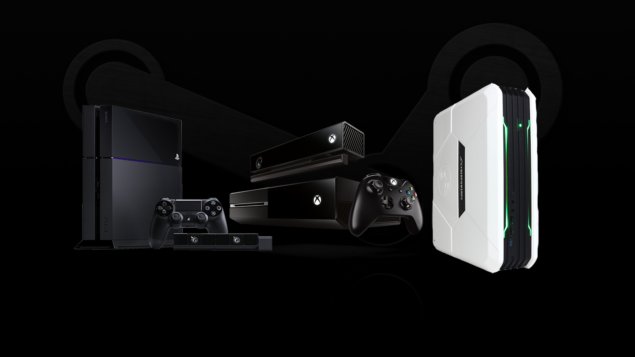 PC vs Consoles: CyberPowerPC Steam Machine is Better Than the Latest Consoles in Terms of Specs and Performance for Only a $100 More

The launch of latest PlayStation 4 and Xbox One consoles turned the entire gaming industry towards the eighth generation of console gaming, and the PC gaming took another step down from the front media. But despite the fact that developers almost always prefer to market console versions of the game, PC vs consoles is still one of the most popular topics that are discussed on almost every single video game website and forum, and with the announcement of Valve's spicy Steam Machines that are being developed by a number of different vendors, it seems like this PC vs consoles controversy will only grow stronger.

Cinema Blend took the notice of how the Steam Machines are going to be a threat to the latest living-room gaming consoles and published a report showing how an entry level Steam Machine by CyberPowerPC manages to leave the PlayStation 4 and Xbox One behind in terms of specifications and performance, while fetching only $100 more bucks. Thank to them for getting all the facts straight, I went through the comparison and found it worth sharing here, so you can check out the PlayStation 4 and Xbox One vs CyberPowerPC Steam Machine comparison right below.

PlayStation 4 and Xbox One VS CyberPowerPC Steam Machine

Packing powerful octo-core processors, both the PlayStation 4 and Xbox One consoles are powered by AMD's Jaguar APU technology. The core clock speed of Sony's latest console is 1.6Ghz, and it can be overclocked to 2.75Ghz max per core. On the other hand, Microsoft boosted the clock speed of its latest living-room console to 1.75Ghz after giving a 10% performance boost to the CPU.

Now talking about CyberPowerPC Steam Machine, it comes with an A6-6400K 3.90Ghz CPU from AMD. Simple it is, the A6-6400K delivers more severe performance per core compared to the Xbox One and PlayStation 4's overclocked tablet-style APUs, despite the fact that the number of cores in the latest consoles is comparatively higher. Now AMD's A6-6400K could be surpassed with those titles that prefer multi-threaded design configurations, but there is not an ample number of those titles presently.

The APUs for the PlayStation 4 and Xbox One bind the CPU and GPU of the consoles to share an end, but they are still clocked in a distinctive manner which allows them to compete with what will come packed in the OEM Steam Machines. Sony arranged an 800Mhz core clock speed with 18 compute units for its latest console and also performed some custom design work on its GPU, thanks to which, the PlayStation 4 can outshine its rival gaming console by a theoretical performance rate of up to 50%. On the other hand, Microsoft upgraded the Xbox One's GPU by 53Mhz, coming up with a total of 853Mhz core clock speed and 12 compute units.

Now, the CyberPowerPC Steam Machine runs on a Radeon R9 270 GPU with 2GB GDDR5 VRAM. Comparatively, the PlayStation 4 GPU performs closer to a Radeon HD 7870, this clearly means that the R9 is about 17% more faster in terms of memory bandwidth and 11% more powerful in terms of pixel computations, as mentioned by Hardware Compare chart. The R9 270 can also outshine PlayStation 4's GPU by overclocking with proper conditions. Comparing it to Xbox One's underclocked 7770 equivalent GPU, the R9 270 can leave it in dust in terms of memory bandwidth by about 150% and 100% in terms of pixel rate.

The PlayStation 4 console rocks 8GB of GDDR5 memory that is shared between the CPU and GPU on the APU. It is still not sure how much of it is required by the operating system of the console, but most reports suggest that only 5GB of usable RAM is left behind after fulfilling the OS requirements. The Xbox One comes with 8GB of DDR3 memory, and 32MB of high-bandwidth ESRAM, which is widely used for caching purposes. The operating system of Microsoft's console also eats about 3GB memory and brings down the usable amount of RAM to 5GB.

On the other hand, the CyberPowerPC Steam Machine comes packed with 8GB of DDR3 dual-channel 1600mhz memory that can be overclocked. The amount of memory that SteamOS requires to run is still not properly known, but it asks for at least 4GB of RAM, which would mean that it only eats up about 1GB. This proves that the SteamOS requires smaller amount of RAM than operating systems of the latest video game consoles, and allows Steam Machines to reach scalable speeds.

Both the latest PlayStation 4 and Xbox One consoles cost $399, while the CyberPowerPC Steam Machine has a price tag of $499. However, paying a $100 more won't hurt much when you know that you are getting more power and performance, and given the open-source Linux -based SteamOS, you have the freedom to enjoy your favorite apps for free. Not to mention, online multiplayer gaming on Steam Machine PCs won't cost you a penny, unlike the PlayStation 4 and Xbox One online subscriptions.

This comparison proves that while the latest consoles have their own place among gaming platforms, the CyberPowerPC Steam Machine is surely a better option if you are willing to pay only a $100 more for a living-room entertainment and gaming solution that packs better and powerful hardware specifications, and offers more performance and features. I know it will come down to the exclusive titles now, but don't forget, we are only comparing the specifications and performance of the machines here, not the titles they are capable to run.

How do you see the upcoming line of Steam Machines affecting the position of the latest PlayStation 4 and Xbox One consoles in the gaming industry? Jump into the PC vs consoles debate and share your thoughts in the comments section below.