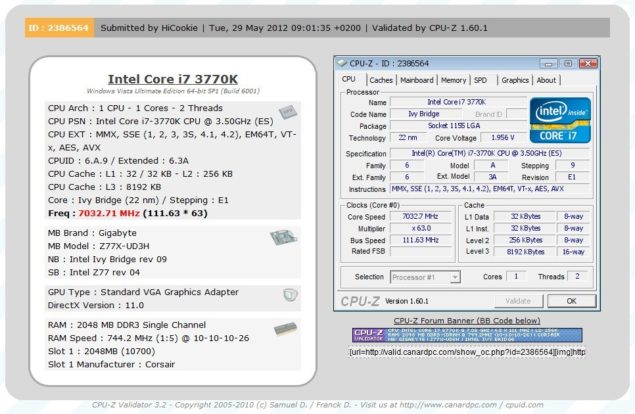 If AMD can be making overclocking records, so can Intel. Apparently a renowned overclocker better known as HiCookie, took his Intel Core i7 3770K processor to a mammoth 7.03 GHz on liquid nitrogen  on a GIGABYTE Z77X-UD3H motherboard to claim the world’s highest Ivy Bridge CPU frequency validation.

Populating all 4 memory slots with the G.Skill Trident X DDR3-2800 memory, he took the memory speeds up to 3280 MHz which is also a new record that too thanks to GIGABYTE’s on board fine memory tuning capabilities.

The records can be validated here and here.

Check out the press release after the break.

"These new world records highlight our belief that top notch quality and design deliver truly world-class, record breaking performance," commented Tim Handley, Deputy Director of Motherboard Marketing at GIGABYTE. "These new performance achievements come at a very opportune time as we prepare to introduce our next generation high-performance CPU power zone at Computex 2012, and we're expecting even better results from motherboard models with this new feature!"