Resolution is a pretty interesting subject. Since it is a case of diminishing returns, the field is inevitably divided into two camps: the purists and those who can never have enough resolution. Most of the enthusiasts and gamers lie somewhere between these two points but probably the most agreed upon resolution is 1080p (or atleast currently anyways). It is therefore, quite troubling that the Oculus Rift, the visual gaming device of next generation only has a resolution of 1280x800 or atleast unless Nvidia's R&D department can do something about it. 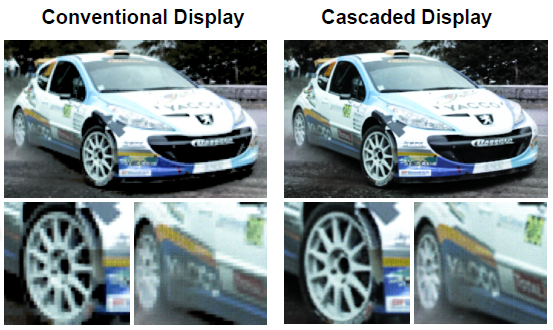 So Basically, the concept is called Cascaded Display and it tries to offer a very cheap solution to the problem that not only Oculus Rift but all head mounted VR Displays faces: increasing resolution without adding an insane price tag. And I am pretty sure, nearly every one would agree that 1280x800 is too low a resolution with 1080p being the bare minimum. Well, Nvidia's R&D department claims it can raise the 'perceivable resolution' to 2560x1600 and very cheaply at that. All they would need to do is stack 2 LCDs together. The method is really quite ingenious and surprisingly very simple. So simple in fact that anyone with reasonable DIY experience could make the hardware at home, although where they would get the software to run that is any body's guess.

Theoretically, if you put two lcds together on a slight offset (quarter pixel), with a quarter-wave film in the middle and the back light of the top lcd removed, you could increase the pixel density by a very strong factor. With one pixel acting as the shutter to 4 pixels your 'perceived resolution' increases to almost 2560x1600. It goes without saying that you would need to design special software to run these Cascaded Displays but the result should be an a very high resolution cheap display tech for VRs like Oculus Rift. And wait, it gets better than that, apparently one side effect is that the apparent refresh rate will increase from 60Hz as well. The problem is however that even though this tech is pretty awesome its targeted at head mounted VR displays. The reason being that when you stack two LCDs together, 1) the brightness decreases, 2) the angle of view decreases and 3) there is some distortion. Factor 1 and 3 aren't really important to a nearly sealed and fully static (from the point of view of the wearer) head mounted VR display, but factor 2 is. However, Nvidia is confident that, that particular problem is very easily curbed on the software side of things. To read more about this technology click here.