When Nvidia showed us official slides for its upcoming DX 11 'Optimization' Drivers we saw massive performance increase all over the board in nearly all situations. Now of course, Nvidia's 337.5 Beta Driver was meant to reduce CPU-Overhead so when we saw that it gave a frames per second increase in Single GPU solutions too, we were pretty impressed. However it turns out that the numbers portrayed, although 'technically' true, don't really apply with the same magnitude to your average scenarios. 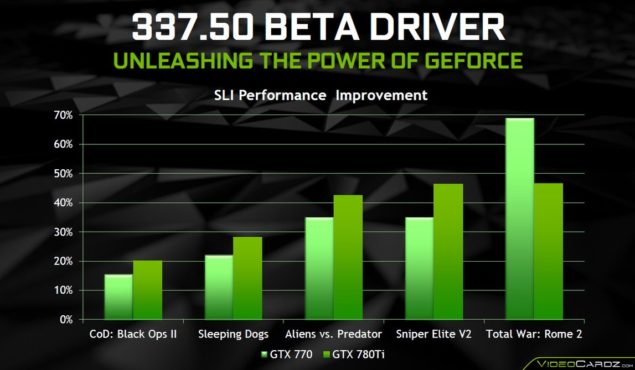 Nvidia 337.5 Beta Drivers Give You a Massive 71% increase - Just throw in another GPU

To put it bluntly, Nvidia's official slides are a hair short of being bad faith. See, you do get a 71% increase with these drivers in Rome Total War, as compared to the 335 Driver set. But thats only because the 335 Drivers did not support SLI, and the 337.5 Beta Drivers do. Don't get me wrong the new drivers do give you a significant increase, but they do so very selectively and Nvidia conveniently failed to mention that. If you play Metro 2033, you will see a significant increase in FPS, but if you are for eg, playing Crysis 3, do  not expect much of an increase.

We saw the same thing when the official numbers from Mantle were released, although to be fair to AMD, the exaggeration was no where near this extreme. The thing is Driver overhead reducing drivers help the most where the situation is CPU-Bound enough. So with these Nvidia drivers, if you have a middle - high order single GPU don't expect much unless you are playing very select games. If you however have a multi-GPU configuration then you should get these drivers asap and expect a 10 - 15% improvement across the board. Which is a somewhat decent increase. Long story short it is a very good update, but just like the Initial Mantle Hype, is sadly over rated. I have an intense distaste of posts like this, but news like these are too important to not be covered.