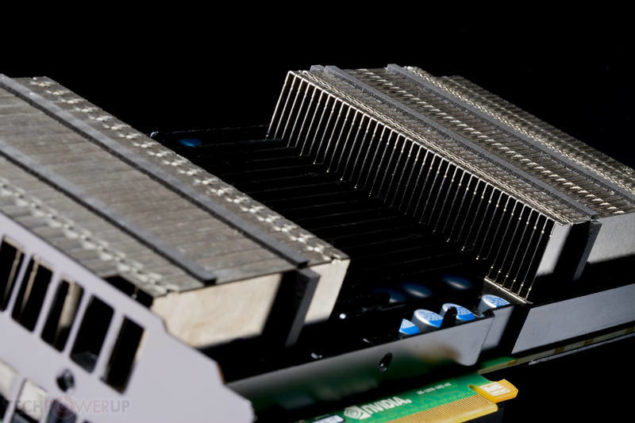 Results are rolling in and Nvidia’s Tesla K10 GPU’s are leading in the field in terms of precision computing performance.

The new dual GPU K10’s currently are the absolute leaders across the board while out performing even the latest Sandy Bridge E CPUs, giving a total output of 12 times higher single precision flops and 6.4 times more the memory bandwidth.

For more information, refer to the press release below:

Based on the new NVIDIA Kepler computing architecture, the Tesla K10 GPU delivers the industry's highest single precision performance (4.58 teraflops) and highest memory bandwidth (320 GB/sec) in a single accelerator. This is 12 times higher single precision flops and 6.4 times higher memory bandwidth than the latest-generation Intel Sandy Bridge CPUs.
The Tesla K10 GPU outperforms CPUs and previous-generation GPUs across the board on the most popular, compute-intensive applications for four key market segments, including:

"A distinct advantage of the Tesla K10 GPUs is that it excels in two key areas that have a dramatic impact on overall application performance: floating point operation and memory bandwidth," said Sumit Gupta, senior director of Tesla business at NVIDIA. "Together, these enable the K10 GPU to deliver substantial out-of-the-box performance increases for the top science, engineering and commercial applications with little or no effort on the part of the developer."

The Tesla system achieved performance of 76 nanoseconds of computer simulation time in a day for a 23,558 atom molecule, outstripping the previous record set with four Tesla M2090s last year, providing supercomputing performance to thousands of individual researchers to fuel further innovation in such areas as new drug discovery and more effective materials.

"In biomolecular science, adding a few more nanoseconds of simulation time can make a world of difference in the ability of researchers to study and better understand the behavior of complex biological systems," said Ross Walker, assistant research professor, San Diego Supercomputing Center. "It still blows my mind that a single Tesla K10 outperforms some of the largest CPU clusters. The benefit it offers researchers is tremendous, enabling them to accelerate the search for new and better treatments for a host of diseases and disorders."

Accelerating the Search for Energy
NVIDIA Tesla GPUs continue to deliver the highest performance on reverse time migration (RTM) applications for seismic processing in the oil and gas exploration industry, and for image processing in the computer vision industry. Petrobras, the national oil and gas company of Brazil, achieved an 1.8x speed up on its RTM application on the Tesla K10 GPU, as compared to a Tesla M2090 GPU within the same power envelope.

NVIDIA Tesla K10 GPUs are available from leading OEMs, including Appro Supercomputer Solutions, Dell, HP, IBM, SGI and Supermicro, as well as through NVIDIA distribution partners. More information about the Tesla K10 is available on the NVIDIA Tesla website.