That's right, you can buy a 28 inch 3840x2160, 60Hz Nvidia G-Sync enabled monitor from Newegg for $599 right now, the Acer XB280HK. It is based on a TN display panel so you won't get the same color richness or generous viewing angles of other IPS or PLS based monitors. However it's not all bad, because TN panels are very fast and responsive you get a 1ms response time with the Acer XB280HK and no perceivable ghosting what so ever. 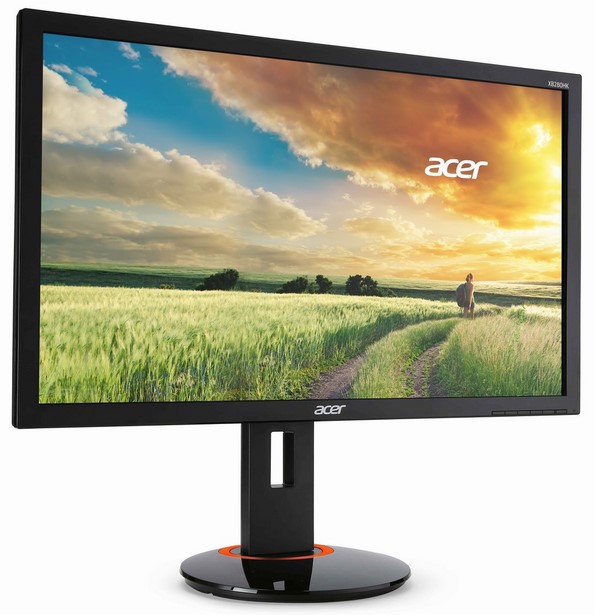 If you're not aware of what G-Sync actually is or what benefits it boasts for gaming you should take a look at our detailed analysis of G-Sync and it's technology rival from AMD, FreeSync, which we published a few weeks ago. But in essence, G-Sync is Nvidia's solution to enabling variable refresh rates in monitors. And this solves three distinct issues in games.

The first issue is tearing, tearing occurs whenever your game's frame rate is mismatched to the refresh rate of the monitor. Which is the result of your graphics card producing a variable framerate, because there will always be frames that take longer to process than others and vice versa.
The second issue is somewhat related to the first, as stuttering can occur if your framerate dips below the refresh rate of your monitor when V-Sync is enabled. V-Sync works to match your game's framerate to the refresh rate of the monitor by forcing each frame to wait for the next refresh cycle before it is drawn onto the screen. This is prevent two frames from being drawn at once in a single refresh cycle which causes tearing.
The third issue is input-lag, which is the result of that "waiting" period that V-Sync forces the frames to exhibit before they're drawn on the screen.
So before variable refresh rate monitors had existed, irrespective of whether they were G-Sync or FreeSync enabled. You had to choose between either tearing and stuttering or latency.

Now let me make it very clear, the list price for the unit in question is $799 and that's the price that you'll find on newegg.com right now should you look it up. However as part of a promotional deal Newegg.com is running right now to advertise their newsletter you can grab the monitor for $200 less. Essentially putting it on-par with other non-Gsync 4K gaming monitors. So if you have a compatible Nvidia GPU and you're looking for a 4K monitor this is by far the best option at this discounted price.

The promotion is available via the promo code EMCARKW22 and is active till the 22nd of April. The code is exclusive to newsletter subscribers, so you'll need to subscribe to use it. If you're already subscribed to Newegg's newsletter you'll probably find that they've already sent you the promotional code to your email.