8GB variants of powerful cards are a popular niche item in the PC Hardware market. These GPUs make for very good SLI/Crossfire setups and allow for a very comfortable overhead on games with ultra high quality textures (think Skyrim and a couple dozen mods). However, due to certain restrictions of memory fabrication and target frequency, these have required extensive PCB customization in the past. However by Q2 2015, 8GB GDDR5 memory will be as easy to add for AIBs as their 4GB counterparts.

An understandable question many could be wondering is how we can infer causality based on just this one listing. The thing is, this listing is very significant. Before I go on to explain that, I would like to point out an important fact. Currently Maxwell GPUs either use Hynix memory or Samsung Memory. The exact specification depends on the particular AIB, make and model but Nvidia's Maxwell is a very large chunk (if not the largest) of the GDDR5 4GB customer base of Samsung. SK Hynix currently offers a maximum of 4GB worth of vRAM in 32-chip configuration and of course recently started offering HBM Memory as well(which will be featured in upcoming Radeons). However, if AIBs wanted to go with an 8GB model they would have to custom design a PCB with 64 vRAM chips (in a 2x32-Chip configuration), a very very expensive path. 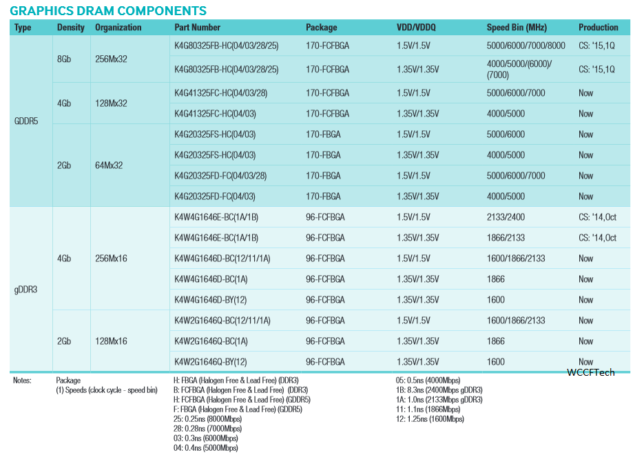 Shown above is the Samsung listing in question. Memory fabrication is expensive, and is carried through only after extensive market research. And the fact of the matter is, there are approximately two customers that Samsung can target with the 8GB GDDR5 8Ghz standard: AMD and Nvidia. Considering the fact that AMD is in bed with Hynix while as Nvidia cards already extensively utilizes Samsung memory, it doesn't take a genius to figure out that there must be existing demand for the 256x32 configuration (8GB in 32chip standard) for them to go forward with fabrication.

So now that we know that 8GB vram for Nvidia GPUs is arriving in Q1 2015, it begs the question which GPUs it will feature in. The most obvious choices are the GTX 970 and GTX 980 which feature a 256 bit Bus. The major problem with Samsung memory as compared to Hynix was that it usually clocked lower (~7Ghz) while Hynix touched the 8Ghz mark. However, this is something that Samsung now appears to have solved since we can clearly see the expected Max frequency of Samsung Vram being 8Ghz.