NVIDIA's Kepler base GeForce GT 740 specifications and details have been confirmed by Videocardz. The card would be the second launch from NVIDIA this month since the GeForce GTX Titan Z has finally been launched today which is the high-performance GeForce 700 series card, the GeForce GT 740 on the other hand is the base entry level card. 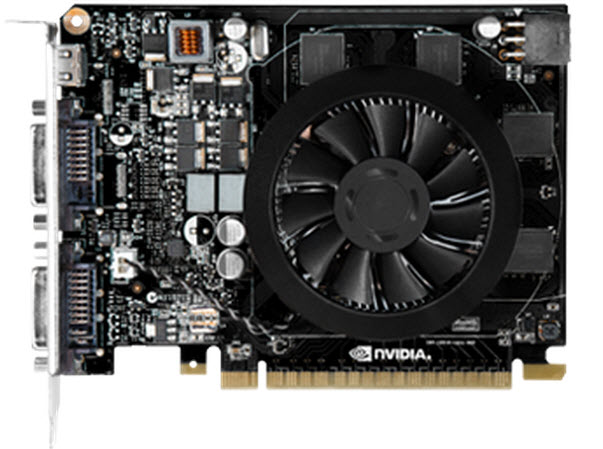 The NVIDIA GeForce GT 740 uses the GK107-425 GPU which is based on the Kepler architecture featuring 384 cores, 32 texture mapping units, 16 raster operators. The core clock is maintained at 993 MHz for the reference models but comes with boost clock which has been absent on the GK107 chips. The memory is clocked at 5000 MHz reference clock (5.0 GHz effective) and comes with 2 GB of DDR3  or 1 GB of GDDR5 memory based SKUs. The memory runs along a 128-bit bus interface and requires a single 6-Pin connector for power.

Some models were previously showcased without power connectors but its likely that graphics cards manufacturers will add these for more stability as seen on the GeForce GM107 based Maxwell cards. The base model comes with a TDP of 64W and the pricing is suggested close to the $79 - $99 mark. The GDDR5 variants will cost $10 more than DDR3 based models but will provide more bandwidth and excess of performance.

Specifications wise, the chip is the same as the GK107-300, GK107-450 and other GK107 variants used across various OEM and Consumer variants. The chip has some improvements when it comes to clock speeds but it seems a lot more like a entry level refresh since the proper entry level market is occupied with GM107 based cards that offer better performance with the same TDP figures yet cost more. These cards will be targeted towards the sub-$99 market and I think that it would have been more wiser to just add price cuts on the GTX 650 (Non-Ti) cards. The launch of the GeForce GT 740 is expected tomorrow on 29th May 2014 and will be priced in the sub-$99 pricing range. 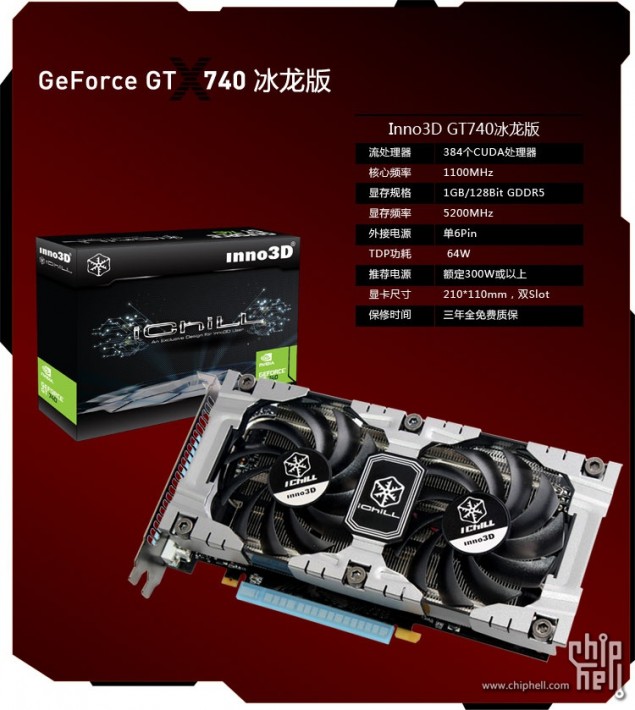 Specifications of Inno3D's GeForce GT 740 have been leaked by Chiphell Forums which show some better figures than the reference model such as the 1100 MHz core and 5200 MHz memory clock (5.2 GHz effective) within the same TDP of 64W and requires a single 6-Pin connector for power to add more stability. The Inno3D GeForce GT 740 comes with the Herculez 2000 cooler and features a 4+1 phase VRM under its hood. Display outputs include a DVI and Mini HDMI slot along with VGA. The card is 21cm long and should easily fit within several cases. The cooling scheme is unique and impressive for a low end card featuring a large aluminum fin array heatsink through which a long heatpipe runs transferring heat from the GPU to the shrinks and cooled down by two fans. This results in better cooling performance and noise output than reference models.

Performance figures posted in the same leak show that the reference GeForce GT 740 is actually slower than the GTX 650 while being faster than the GeForce GT 640 GDDR5 variant. The Inno3D model tops the chart offering superior performance over the GeForce GTX 750 however pricing on the non-reference variant would also be slightly higher. 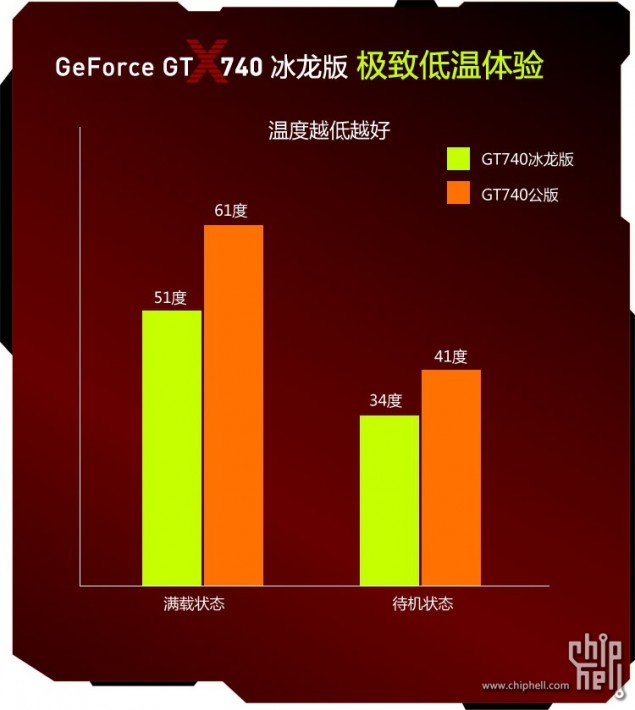 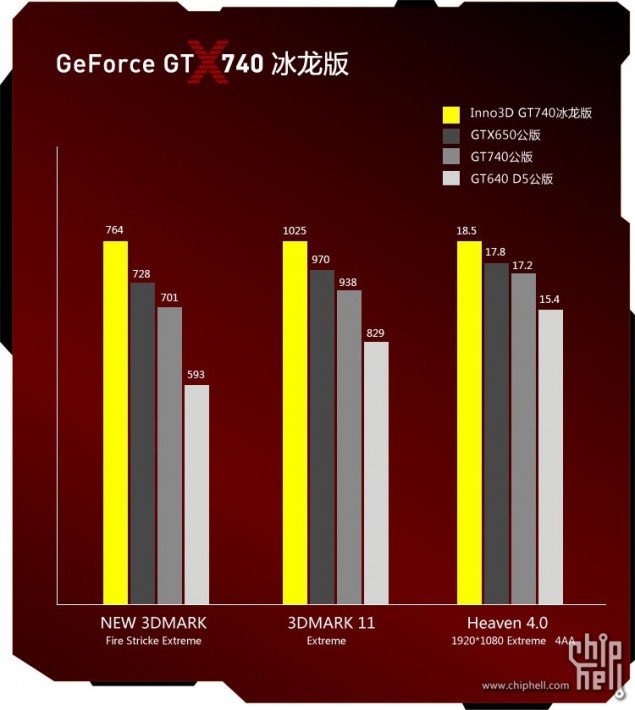 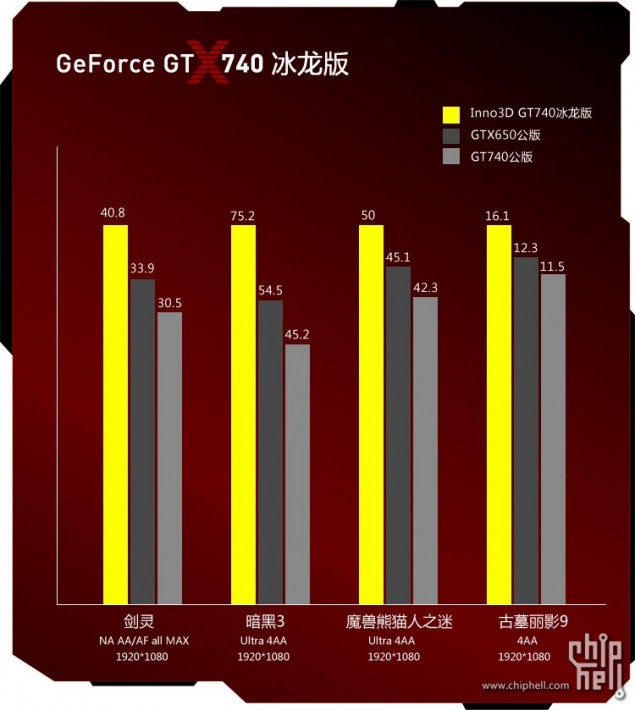 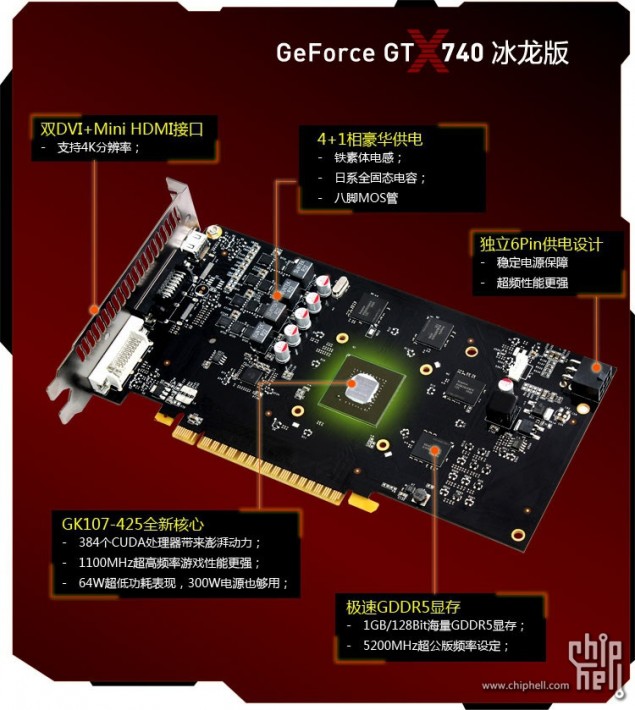 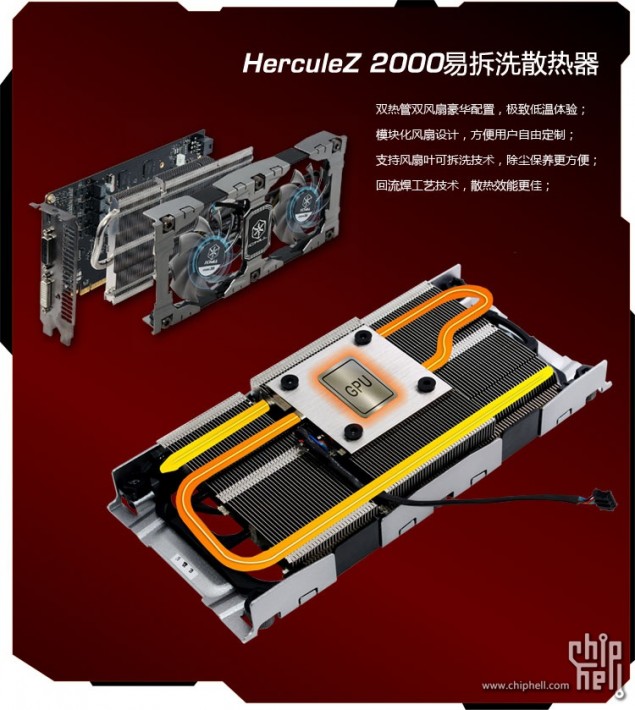 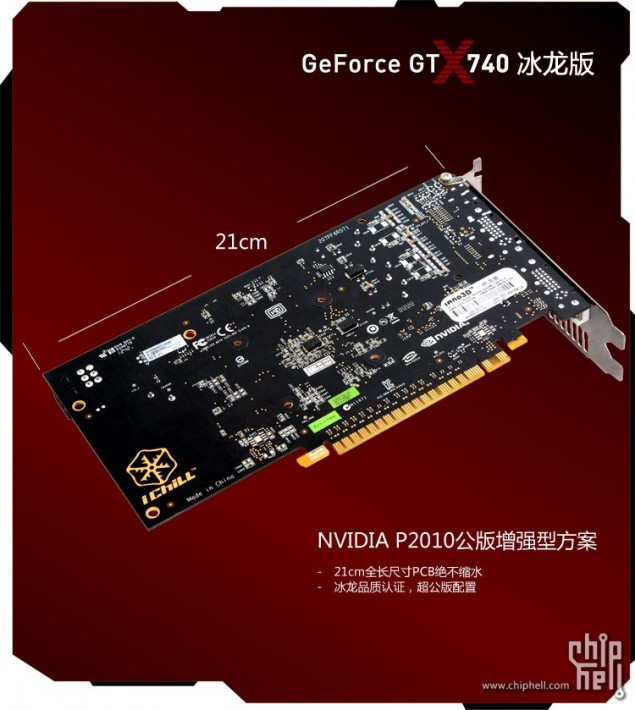