The world's current leading graphics card and motherboard manufacturer MSI has announced the availability of a reference GTX 680 better known as the GTX 680 Twin Frozr / OC edition that comes with MSI's well known Twin Frozr III GPU Cooler with stock core clocks on turbo boost 1058 MHz and 1124 MHz on OC mode with a flip of a switch. 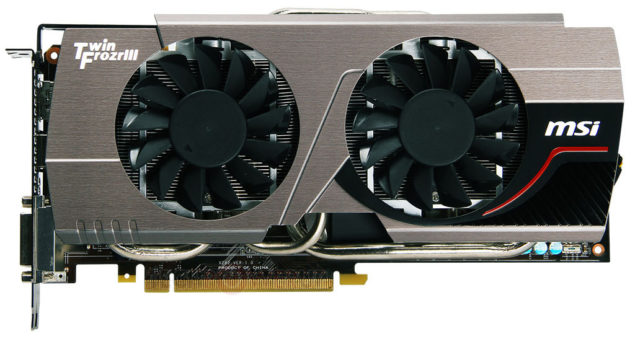 The cooler also maintains temperatures 22C lower than the stock reference cooler that comes shipped with the GTX 680 while also running around 10 db lower in terms of noise coming from the card itself. This variant ships with 2 GB of DDR5 memory spread across a 256 bit interface.

Check out the official press release after the break.

In addition the GTX 680 Twin Frozr /OC also supports MSI’s Afterburner overclocking utility, which enables you to tweak power and clock settings to get even more performance out of your graphics card. Both NVIDIA 3D Vision Surround and 4 display out from a single card are supported ensuring that gamers can enjoy the best entertainment and multitasking experience possible.

Advanced Twin Frozr III Design Runs 22˚C Cooler and 10.2dB Quieter than Reference Design
The MSI GTX 680 Twin Frozr/OC features the Twin Frozr III cooling module that has won popular acclaim from media around the world. The proprietary Propeller Blade technology has been patented in multiple countries and features special airflow channels on the edge of the fan blades to increase airflow by 20% compared to conventional designs and reduce noise as well! Under full load, the GPU core of the GTX 680 Twin Frozr/OC graphics card is 22˚C lower than the reference design and operating noise is reduced by 10.2dB. This combination of outright performance and ultra-quiet operation is proof that MSI products can provide gaming enthusiasts with the coolest and quietest user experience!

Support for MSI's Exclusive Afterburner Overclocking Utility
The MSI GTX 680 Twin Frozr/OC graphics card supports NVIDIA's GPU Boost technology that allows the core clock to be adjusted on the fly for optimal gaming performance. When used with MSI's exclusive Afterburner overclocking utility, gamers can control the power limit and clock offset for better overclocking capability. The card is also equipped with advanced fans speed control based on GPU temperature. Afterburner supports the free video/audio capturing function Predator and can even use smart phones to control the graphics card in desktop machines. When combined with the Kombustor burn-in testing function, it is an indispensable tool for enthusiasts looking to get the most out of their graphics card.

Support for Single-Card 3D Vision Surround Technology
Apart from supporting the latest DirectX 11 technology, the MSI GTX 680 Twin Frozr/OC graphics cards has the ability to enable NVIDIA 3D Vision Surround using three 3D monitors and 3D glasses with just a single card. Gamers will be able to enjoy the spectacular visuals of 3D games and movies. Additionally, support for up to four displays driven by one graphics card allows gamers to make the most of multiple-monitor gaming configurations.