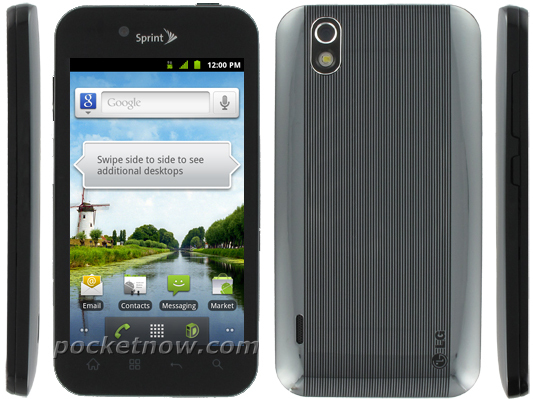 LG and Sprint have announced that the LG Optimus Black will be coming to Sprint as the LG Marquee. The Marquee (Optimus Black) was known to be coming to Sprint but now the rumors are official. Despite the change of names, the device is still pretty much the same apart from some minor aesthetic changes and will be launching on October 2nd, with pre-sale between September 20-27th online. The device has IPS NOVA display at 4" which seems to be the major highlight, and LG claims it is the brightest cell phone display on the market. Other than that the specs are pretty mid-range.

The device will be running a 1Ghz single core processor, 512MB of RAM and 2GB if internal storage which can be expanded upon with a microSD card upto 32GB in size. There is a 5MP camera on the back and a 2MP camera for the front and all of this is powered by a pretty standard 1500mAh battery. As mentioned before, despite the mid range specs, the main selling point of the Marquee is its display, which should also work in direct sunlight thanks to its bright screen. This is specially a problem for AMOLED displays that don't perform so well in sunlight. The phone will be available for $99 for customers eligible for a upgrade or new customers through a 2 year contract and after a $50 mail in rebate. If you're interested you can read more about the Marquee here.