Leonard Nimoy Passes Away At 83

I'm very saddened by this news, however natural the cycle of life and death is. Leonard Nimoy has passed away today at the age of 83. He was such an inspiration to so many people in the world. He was a force to be reckoned with, and now it is his time to pass over into the great unknown, and to become one with the Force. 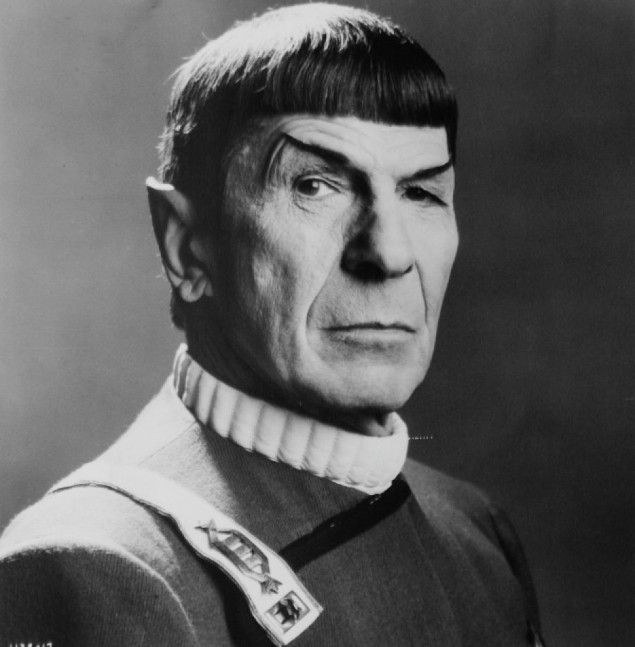 Leonard Nimoy has passed away in his home in Los Angeles at the age of 83 today, February 27th 2015.

The cause of death has been ruled to be end-stage chronic obstructive pulmonary disease, something he announced that he was diagnosed with some years ago. It almost seems unfair that such a great person can be taken form the world like this. But this is the cycle of life and death. No matter how saddened we are by it.

What a wonderful last tweet. Very inspirational, which represents everything he was in life. 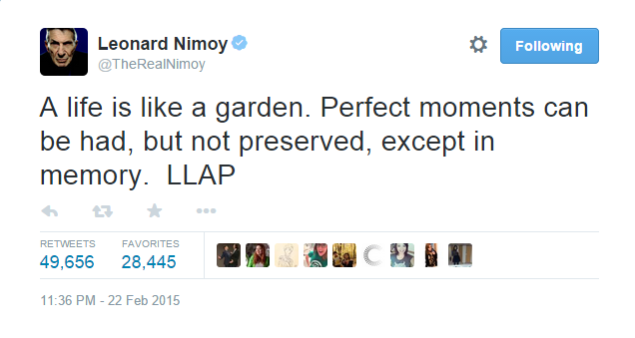 Leonard Nimoy was an absolute fantastic person and an influential actor. His portrayal of Spock is certainly iconic not only as a screen character, but as a much deeper person that he represented. He was amazing, simply amazing.

His portrayal of Spock has even found a way to touch my life as well. His deep and authoritative voice resonates with me, and his wisdom, though perhaps written lines in a script, were more than that. There is a presence about him. It doesn't hurt that he reminds me very much of my Grandfather either.

It wasn't just his portrayal of Spock that he will be remembered for. His zeal and passion for entertaining others also spread to the other arts as well, with poetry, books and photography.

Mr. Nimoy also found his voice as a writer. he's published several influential works, including A Lifetime of Love: Poems on the Passages of Life in 2002, a collection of his mastery over the written word. Mr. Nimoy’s simple free verse are incredibly expressive, and speak to the soul. Such as this line:

In my heart/Is the seed of the tree/Which will be me.

His photographic prowess was also something that was, perhaps, unexpected. Black and white nude and semi-nude photographs of women were his specialty, showing the beauty of the female form in a very feminine way.

He even illustrated his books of poetry with his photographs in 2002, Mr. Nimoy published Shekhina which is a book devoted to Jewish themed photography and showed the feminine aspect of God.

Born in Boston on March 26, 1931, Leonard Simon Nimoy was the second son of Max and Dora Nimoy, Ukrainian immigrants and Orthodox Jews.

He ended up serving two years in the US Army and helped to entertain the soldiers at Ft. McPhearson by organizing shows and other theater pieces before being honorably discharged at the rank of Sergeant.

Oddly, many years after his portrayal of Spock, he mentioned that the Vulcan way of thinking made its way into his life, and had a profound impact on how he lived.

And now he's passed on to become one with the Force. He will always be remembered. You are, and will always be, a true friend. We love you Leonard Nimoy. May the Force be with you on your journey into the beyond. I believe he truly did, live long and prosper. Goodbye good friend.

"We are assembled here today to pay final respects to our honored dead. And yet it should be noted, in the midst of our sorrow, this death takes place in the shadow of new life, the sunrise of a new world; a world that our beloved comrade gave his life to protect and nourish. He did not feel this sacrifice a vain or empty one, and we will not debate his profound wisdom at these proceedings. Of my friend, I can only say this: Of all the souls I have encountered in my travels, his was the most... [voice breaks] human."