Learn a New Language on the Xbox One With Rosetta Stone

Rosetta Stone has just announced that very soon you'll actually be able to make use of the Xbox One to help you learn a new language. 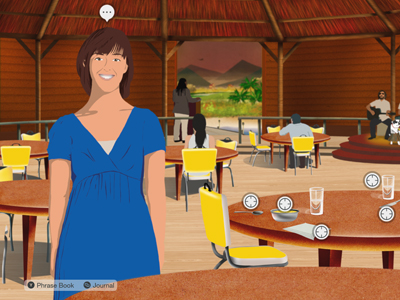 Rosetta Stone is going to release an app on the Xbox One that can help you learn a new language by taking advantage of the Xbox One's ability to provide an immersive experience.

Do you want to learn a new language? Perhaps brush up on your Spanish or English speaking skills? Well, you can soon use your Xbox One to progress your language skills via a very exquisite app from Rosetta Stone.

The Xbox One is a great platform for trying to learn a new language, much like the PC, in that it can offer a rich experience and leverage the Kinect platform to help give you the feedback you need. It makes sense for Rosetta Stone to develop applications that work on consoles. Even the PS4 is a good platform to deliver this kind of content.

Who knows, maybe it'll even incorporate localized gestures as part of the learning process one day as well. Body language is also rather important when visiting other cultures and speaking other languages.

Playing video games is great cognitive exercise; it helps improve your focus, memory, and ability to multitask. And now with Rosetta Stone’s Discover Languages Xbox launch, you can also use a video game to learn a new language. Rosetta Stone’s new application teaches English and Spanish by way of immersive simulation. Virtual travel experiences teach you the vocabulary and grammar necessary for real-world interactions. So before you book a flight to a foreign destination, grab your controller.

Currently there is only an English and Spanish language course, though that doesn't mean that they can't adapt other languages to be used on the Xbox One platform as well. It could even conceivably be ported over to the PC so that this video game approach to languages can be used there, as well.

Be prepared to have language based achievements added to your already large list on Xbox Live. Though no release date has been set, but it appears as if this novel way of learning languages through gaming should arrive "soon".