Inte'ls Roadmap of its upcoming new Sandy Bridge Processors and SSD's have been leaked. The processors line up has been revealed by MacBidouille which shows 19 new desktop and netbook processors based on the new Sandy Bridge technology which will start shipping in early 2011.

The new Sandy Bridge line up reveals many new low powered i5 Quad Cores which include a 2.3Ghz i5 with a power consumption of 45W.

There's also an update for notebook's which will be updated with Sandy Bridge which include Dual Cores with same specifications as the previous generations but lower power consumption featuring clock speeds of 2.5GHz, 2.6GHz and 2.7 GHz for two Core i5 and one Core i7 model respectively. The Quad Core versions may not be that power efficient but will have higher clocks of 2.2GHz, 2.3GHz and 2.5GHz as compared to the top 2.13GHz today.

The new Sandy Bridge processors will have a new desktop chipset and will feature a much faster integrated graphics processor with i the CPU die and a new set of media instructions known as AVX. 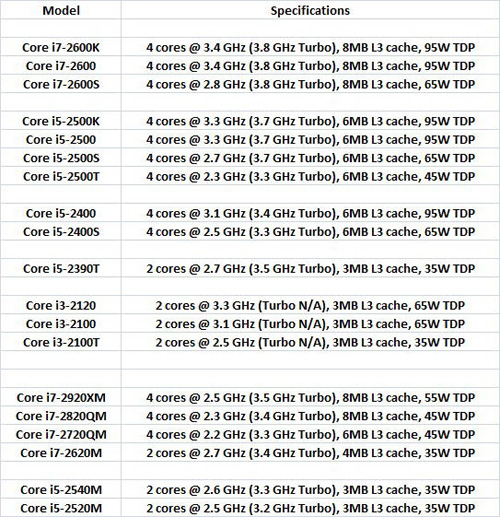 The roadmap of Intel's upcoming SSD's has also been revealed which show vast improvements to Intel's 34nm flash memory techniques will see budget X25-E drives up to 400GB and mainstream X25-M drives at a new peak of 600GB. The 1.8 inch drives will have a 160Gb size while boot-focused X25-V drives will stop at 80GB. A new PCI-Express SSD which is codenamed Soda Creek is also expected to debut the same time and will have a 80GB Peak size. 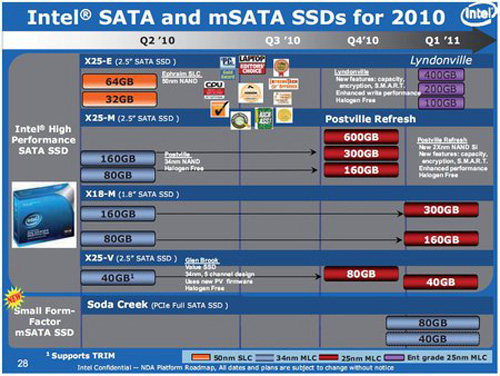