Intel’s Compute Stick was poised to establish a brand new market for itself by turning the average TV into a limited capability computer. However, the product that hit the market was very much an unfinished one, with cumbersome problems in its design. These ranged from the lack of a multiple USB ports, to connectivity issues to much more. This year at CES, Intel has introduced its next generation Compute Stick in three flavors – all of which hopefully will be without the bugs of the first generation. 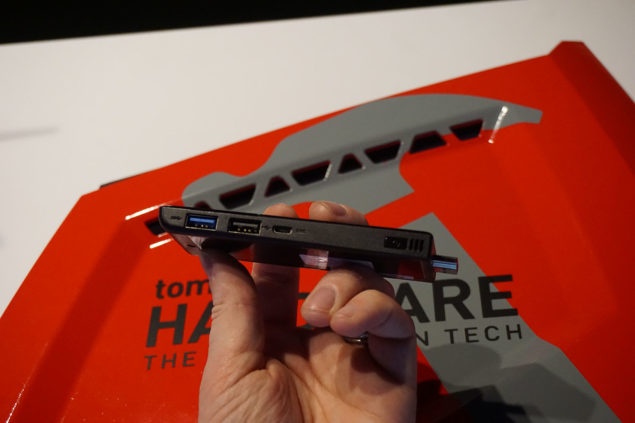 The new Compute Sticks will come in Atom and Intel CoreM lineups. Lets start with the Atom variant first. Rocking an Intel Atom x5 Z8300, the cherry trail based stick will have Intel HD Graphics and 2GB of LPDDR4 ram. The storage will be 32GB eMMC storage. Intel has added an additional USB 3.0 port alongside its USB 2.0 port and changed the networking adapter from the older Realtek version to an Intel 7265 based one. These changes should ensure that the problems faced by the early adopters won’t present themselves to new buyers. Tom’s Hardware was also able to do a benchmark rundown of the Compute Stick, and they found the little device wielding an impressive amount of power. The MSRP is locked in at $159 but the time-frame of release has not been specified.

Lets talk about the CoreM variants now. The lower end core M based Compute Stick houses the Intel Core M3-6Y30 chip with 4GB DDR3 and 64 GB of eMMC. They also house an Intel HD 515 integrated graphics solution as well as 3 USB ports. Both sticks are based on Intel’s 14nm process. The Core M3-6Y30 variant has a clock speed of 900 Mhz with turb upto 2.4 Ghz. The MSRP will be set at $399. The higher end version contains an Intel Core M5-6Y57 vPRO and houses 2 cores with hyper threading enabled for a grand total of 4 threads. It is clocked at a decent 1.1 Ghz and turbos all the way upto 2.8 Ghz. Both variants have 4MB of L2 cache and TDP of 4.5W. The pricing of the flagship will be $499.

The devices are expected to start production in February so should be able to hit the shelves sometime this year. Although, with those enormous price tags, I am not really sure, what market Intel is targeting with the CoreM Compute Sticks. In $500 you can build a very decent SFF HTPC. (In my personal opinion) The device does not justify a $399 price tag let alone a $499 one. Consumers might be willing to swallow a $159 price tag for a piece of stick that enables minimum functionality and this might be acceptable to as high as $250, but anything above that is very hard to imagine being accepted by the market. Still, time might prove me wrong and the performance of the higher variants might be high enough to turn them into a relative success.