Intel (NASDAQ:INTC) has now announced its earnings for the first quarter of 2022, barely exceeding consensus expectations regarding its top-line metric.

Intel (NASDAQ: INTC) Earnings Release for the First Quarter of 2022

For the three months that ended on the 31st of December 2021, Intel reported $18.4 billion in non-GAAP revenue. The number exceeded consensus expectations by just 0.4 percent.

Here is the performance of Intel's business segments in Q1 2022:

During Q1 2022, IFS recorded the highest growth, while CCG remained the laggard with growth of -13 percent. 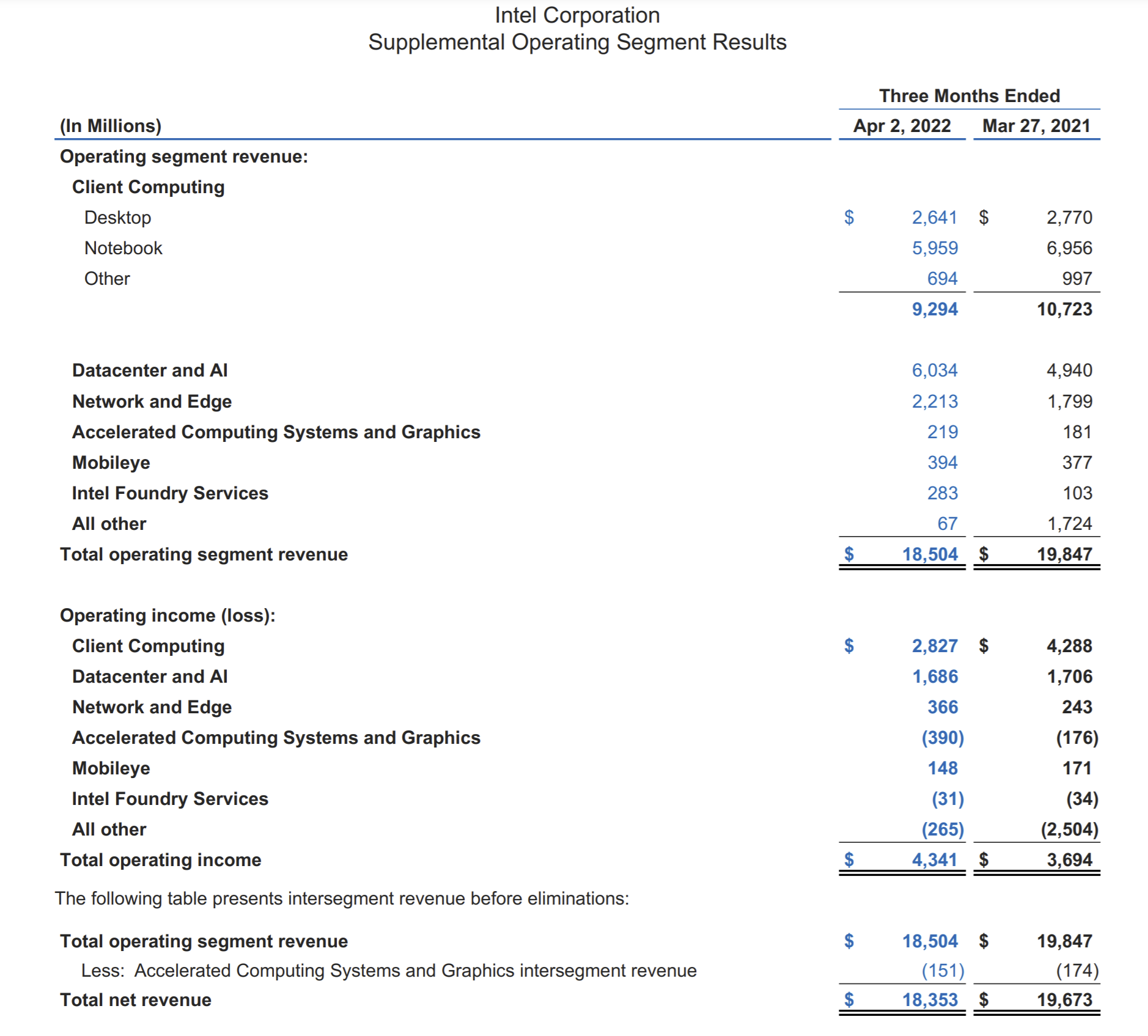 Here is Intel's guidance for the second quarter of 2022:

The company's quarterly highlights include:

Investors have reacted negatively to Intel's latest earnings release, with the stock currently down over 4 percent in after-hours trading.

Q1 2022 earnings for Intel come at a time when the company has exited the Russian market in response to the US sanctions. This factor is a headwind for growth in Intel's top-line metric as well as margin expansion.

As far as the company's upcoming product line-up is concerned, Intel expects to start shipping CPUs based on its 7nm node in late 2022 or early 2023. Moreover, initial shipments of the company's first 7nm-based CPU for data centers are expected to commence in H1 2023.

Additionally, analysts will be sure to scour Intel's earnings call for additional details regarding Mobileye's upcoming IPO, which is expected to yield a $50 billion windfall for the semiconductor giant. 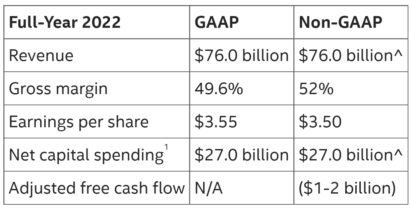 Back in February 2022, Intel had expounded on its long-term growth strategy at a meeting with its investors. For the entire FY 2022, the company expects to generate $76 billion in non-GAAP revenue, a non-GAAP gross margin of 52 percent, and a non-GAAP EPS of $3.50. It is also expected to record $27 billion in net capital expenditure and an adjusted free cash flow of -$1 billion to -$2 billion during the current year. 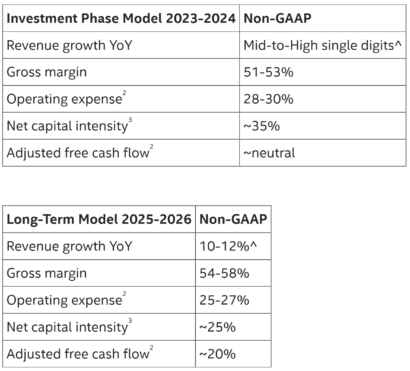 As far as Intel's long-term prospects are concerned, the company expects to register an annual growth in revenue that is in mid-to-high single-digit percentage in 2023 and 2024. However, by 2026, the company expects to ramp up the annual growth in its top-line metric to between 10 and 12 percent on the back of gross margins that should rise to between 54 percent and 58 percent.

Of course, Intel's pivot toward its foundry business is expected to play an important role in this turnaround. Intel is investing at least $20 billion to build a hub in Ohio that might eventually house as many as eight fabs. The company plans to build at least two fabs at its Ohio hub on a priority basis, with production expected to commence in 2025. Intel is also investing another $20 billion in Ocotillo, Arizona, in order to add two new facilities that will serve both Intel's customers and future foundry partners.

Moreover, instead of building numerous complete fabs outright at a substantially higher cost, the semiconductor giant now plans to build a number of "shells" that can then be ramped up to a full-fledged fabrication facility in a relatively short period of time, based on market conditions and customer readiness.