Intel has started considering to bundle stock liquid cooling solutions with its upcoming Next Generation Sandy Bridge-E based processors. This will allow the CPU's to run not only at lower temps but also giving them more headroom for overclocking making the CPU run at higher clocks.

Intel, For many years had been bundling a simple stock cooler consisting of a heatsink + fan with its past processors and recent;y introduced a new heatpipe based thermal solution with its LGA 1366 Extreme and Sandy Bridge Lineup. Intel revealed its plans for liquid cooling at the Intel Developer Forum in Beijing, China. The stock liquid coolers will be introduced in the next generation Sandy Bridge-E Lineup and would help increase the popularity of Intel products in market. 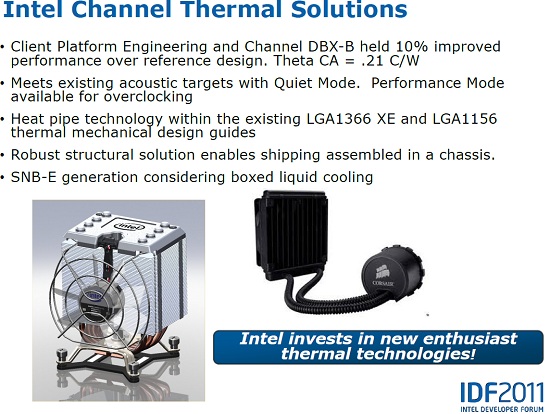 The image on the paper presentation shows Corsair H50 which is just an example and Intel would be considering other options. For this job Intel is considering to sign a contract with CoolIT or Asetek. Do know that orsair's liquid cooling system is designed and manufactured by Asetek, while CoolIT Systems recently announced cooperation with Corsair on future solutions.

The availability of Liquid Coolers with Intel CPU's would be a great deal. Let's just hope they don't hit their price alot. Recent roadmaps showing Intel's Sandy Bridge CPU's were also leaked which you can check out below:

Big thanks to Xbit labs for sharing the news.
Source