Intel has just confirmed the launch window for Rocket Lake S almost a day after we posted two leaks related to the same (here and here). The company has also confirmed that the desktop platform will ship with support for PCIe 4.0 - a feature that was missing in Intel's mainstream parts. The full blog post by ohn Bonini, Intel’s VP and GM of Client Computing Group Desktop, Workstations and Gaming that confirms the launch is reproduced below with permission.

Intel’s Commitment to Gaming, and a Sneak Peek at Intel Technology to Come

It’s been a challenging year, to say the least, and if you’re like me, my family and friends, or a number of my colleagues, you’ve turned to games for entertainment. Gaming—especially my favorite, PC Gaming—has provided us an outlet to escape and socialize. As an example, I’m currently playing Marvel’s Avengers and Sid Meier's Civilization VI. Playing the latter title for years, I’m still surprised how my desire for “just one more turn” evolves into an additional 10 with more hours happily spent than anticipated. But that’s Gaming, and what’s not surprising is its positive impact on society – and how that’s only increasing. 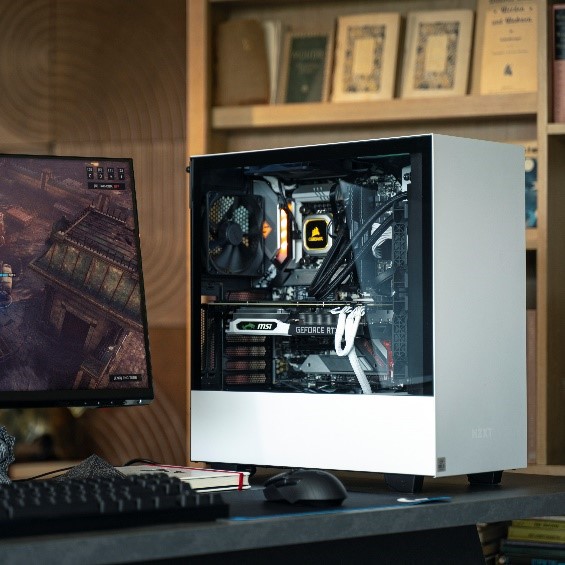 Here are a few things to consider: PC gaming is becoming bigger, more equitable and more diverse, while the quality of today’s hardware and software is expanding. So, it should come as no surprise that Intel is excited to lead the pack bringing PC gaming into a new and extraordinary decade by building on our roots.

Gaming is in Intel’s DNA. From the Intel Pentium processors in the 90s, to Core 2 Duos in the mid-2000s, to the current mainstream 10th Gen Intel® Core™ S-Series desktop processors, Intel has proudly provided enthusiast gamers the hardware to enable bleeding-edge PC gaming performance. To that end, I want to show you where we are – and where we’re going – on our journey together to make the PC the best place to play.

We have the privilege of working with world-class developers and publishers on the latest and greatest games. We start early in the development cycle to help them optimize performance, develop new features and ensure stability before release. But our partnerships – in the US exemplified by our work with Epic to optimize gameplay on Intel technology for Unreal Engine-based titles, our decade-long collaboration with IO Interactive A/S on Hitman and Creative Assembly on the Total War series, or globally with developers like iQiyi, Huya, Bandai Namco, Ubisoft, Sega, Joyy, etc. – are more than just enabling for launch. We work closely with game engineers after launch to continually tune the experience, and make it as fluid and stable as possible.

We are excited about how hardware helps bring amazing software titles to life. Our work with OEMs creates a hardware environment where game developers and publishers can deliver the immersive experiences that they intend. We like to be in the digital trenches with game developers to help them squeeze as much performance out of the hardware as possible so what you see on screen is as faithful to their vision as possible. Here are a few additional examples of that work for recent titles:

This is why we are excited about our latest Intel 10th Gen processors across desktop and mobile because they can provide the highest frequencies available to unlock maximum gaming potential. They’re designed to give casual, enthusiast, and professional gamers – whether they’re at home or on the road – the high performance they expect from our storied history of designing and producing industry-defining CPUs.

Processor frequency remains a key consideration because many popular apps and high-performance games scale with frequency. Intel’s current generation of processors – led by the Core i9-10900K on desktop and the Core i9-10980HK on mobile – achieves an industry-leading 5.3 GHz[i]. To enhance processor performance, we’ve developed innovative solutions like Turbo Boost Max Technology 3.0 and Thermal Velocity Boost which automatically boost performance. Whether overclockers prefer manually tuning their system in the BIOS or using exclusive software from Intel (i.e. Intel Performance Maximizer (IPM) or Xtreme Tuning Utility), we continue to serve the overclocking community by giving them frequency options and maximum flexibility to make their rig scream. For instance, Allen ‘Splave’ Golibersuch documented his experience overclocking the Core i9-10900K with liquid nitrogen to over 7 GHz – an amazing accomplishment!

It’s also worth calling out some nice benefits for Intel platform users. If you’re a gamer, you know the frustration that comes along with a killer lag spike or molasses-like latency. So, don’t forget that our platforms incorporate the latest and greatest Wi-Fi 6 technology!

Our 10th Gen Intel Core processors continue to provide excellent performance and a stable platform for even the most demanding games. Ultimately, I believe there’s a great 10th Gen option that addresses the needs for every type of gamer – from casual players, to the most dedicated and passionate enthusiasts.

Though as you’d expect, we’re constantly looking ahead at what’s next and how we can make our desktop CPUs even better. With that said, I’m also happy to confirm that the next generation 11th Gen Intel Core desktop processors (codenamed “Rocket Lake”) is coming in the first quarter of 2021 and will provide support for PCIe 4.0. It’ll be another fantastic processor for gaming, and we’re excited to disclose more details in the near future. There’s a lot more to come, so stay tuned!

Software and workloads used in performance tests may have been optimized for performance only on Intel microprocessors.

Performance tests, such as SYSmark and MobileMark, are measured using specific computer systems, components, software, operations and functions.  Any change to any of those factors may cause the results to vary.  You should consult other information and performance tests to assist you in fully evaluating your contemplated purchases, including the performance of that product when combined with other products.   For more complete information visit www.intel.com/benchmarks.

Performance results are based on testing as of dates shown in configurations and may not reflect all publicly available ​updates.  See backup for configuration details.  No product or component can be absolutely secure.

Altering clock frequency or voltage may void any product warranties and reduce stability, security, performance, and life of the processor and other components.  Check with system and component manufacturers for details.

Your costs and results may vary. Intel technologies may require enabled hardware, software or service activation.

Intel does not control or audit third-party data.  You should consult other sources to evaluate accuracy.

© Intel Corporation.  Intel, the Intel logo, and other Intel marks are trademarks of Intel Corporation or its subsidiaries.  Other names and brands may be claimed as the property of others.  ​