Instagram Calls on Android Users to Beta Test Next Update

Instagram being one of the most popular Android app these days, now presents a chance for you to be a primary beta tester for Google mobile’s board. The photo sharing applications new features includes various things that can make you fall in love with instagram once again.

The beta program will be for feedback before the actual release

Instagram announced today that before making a release of its new features to public at large, it decided to put up a pre-release testing program of the features for Android users. This is basically to get a customer response of the features before the release and also to know whether the features work out for a large community or not.

Instagram is a simple way to capture and share the world's moments. Transform your everyday photos and videos into works of art and share them with your family and friends. See the world through somebody else's eyes by following not only the people you know, but inspirational Instagrammers, photographers, athletes, celebrities and fashion icons. Every time you open Instagram, you'll see new photos and videos from your closest friends, plus breathtaking moments shared by creative people across the globe, said Instagram.

Facebook owns Instagram, as known by all. Previously, Facebook asked Android users to check on the Messenger app and also the Facebook for Android App. This time also, Facebook users are invited to test on this pre-release beta version of Instagram features. Instagram people who want themselves to be a part of this testing program needs to change their live version to beta version and also they should be prepared to put up with various problems including budding bugs etc.

Beta programs are for a use by only a few numbers of users and it is basically to try out the new features to see what works and what not before it gets released to a wider audience.

Those who want to be in action by being a part of this pre-release testing program, joining the Instagram Beta group on Google+ would be the first step ahead towards their destination. Once the account has been made correctly, the next step is to visit the tester link. After that download Instagram that is available at the Google Play Store to update from the current live version to beta version of the application. Lastly, feedback during the testing session is to be submitted through ‘report a problem’ option. 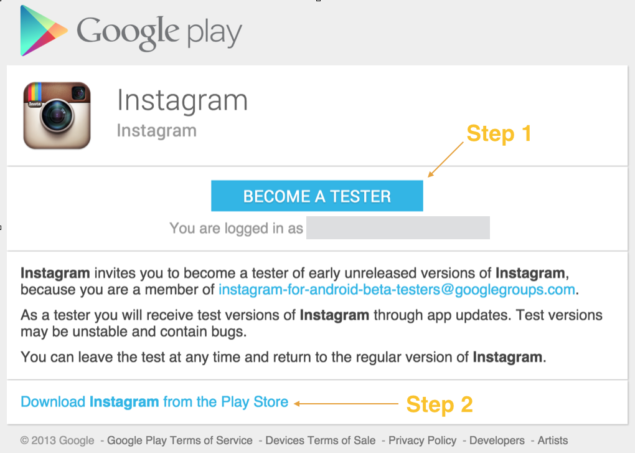 The instructions by google.