There is no denying that Huawei is doing pretty well despite the looming uncertainties regarding the company's future. The company is working on the Huawei Watch GT 2 Pro, which is going to serve as their flagship smartwatch, and so far the information we have indicates that the smartwatch will be announced at the end of this month.

Today, however, comes bearing gifts as Huawei Watch GT 2 Pro has leaked in full glory, with press renders along with key specs being listed. The watch brings a familiar design language that we have come to expect from Huawei.

The Huawei Watch GT 2 Pro Looks Just as Good as We Wanted It, Can Easily Tackle Samsung's Galaxy Watch 3

The renders come as a courtesy of WinFuture, who have helped us break some news in the future as well. According to the renders and the information provided to us, the Huawei Watch GT 2 Pro will ship with a 1.39-inch AMOLED screen that will have a 454 x 454 resolution, you will also get access to 4 gigs of internal storage, and 455 mAh battery. You will also get built-in GPS and all the other connectivity options, and according to the tip, the GT 2 Pro will deliver up to 14 days of battery on a single charge. Certainly an impressive claim. 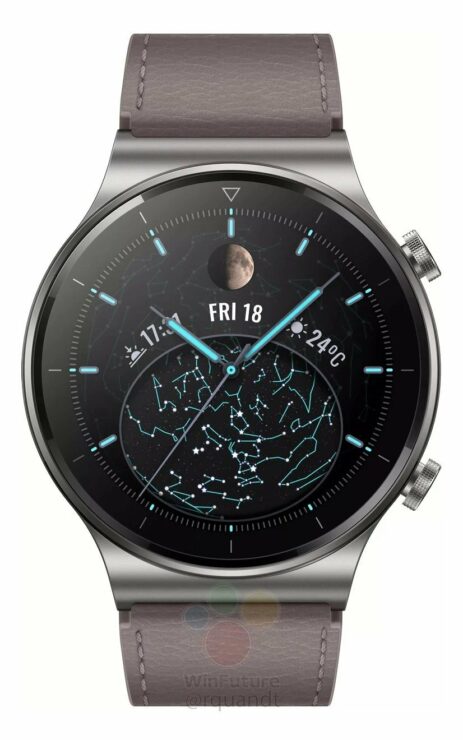 From the looks of it, the GT 2 Pro is going to ship with almost the same stuff as the original Watch GT 2, however, the most impressive and important change this time around is the addition of Qi wireless charging support.

The GT 2 Pro is going to be running Lite OS, which is Huawei's own platform for their wearables. We don't have any official information on when the smartphone is going to be revealed or what it will cost, but according to the source, it will go on sale in Germany sometime in the coming weeks and will cost around €280 ($331)