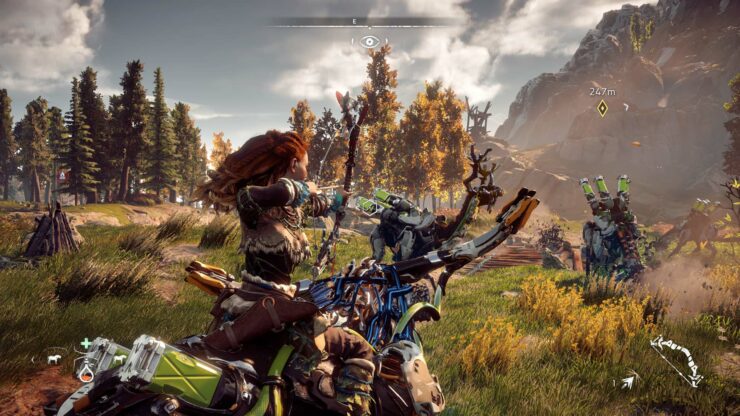 Horizon Zero Dawn, the open world game currently in development by Guerrilla Games, is one of the most interesting PlayStation 4 games launching next year. What makes the game even more interesting is the fact that Guerrilla Games is known for games that are radically different from what they have created up until recently, such as the Killzone series, but it seems like Horizon has been born from the team's desire to branch out.

In a new interview during the Lisbon Games Week, Horizon Zero Dawn Lead Quest Designer David Ford talked about what led Guerilla Games to work on Horizon Zero Dawn. During the final phases of the development of Killzone Shadow Fall, members of the team started considering some new ideas, with the basis of Horizon Zero Dawn coming up at this time. The game ultimately represents the team's desire to create something vibrant, colorful and different from everything they have done before. Ford also mentioned that the development of Horizon Zero Dawn has proven to be a challenge since the nature of open world games is radically different from the linearity of first person shooters.

During the same interview, David Ford also revealed some interesting new things regarding Horizon Zero Dawn. Apparently, machines won't be the only enemies Aloy will fight, as she will have to contend with members of other tribes that don't see her too kindly. David Ford also confirmed that there will be multiple difficulty settings, but how the experience will be influenced by them will be revealed at a later time.

For starters, for players who still possess standard 1080p HDTVs, we’re able to offer far better image quality. We’ve got a number of techniques at our disposal. The most logical one is supersampling. This is a very high-quality anti-aliasing technique, which basically means we internally render at a higher resolution (close to 4K) before shrinking it down to the final 1080p resolution.

As our internal calculations are done at a resolution much higher than 1080p, more detail survives before we shrink it down to 1080p, resulting in smoother edges – virtually no jaggies – and a more stable image.