UPDATED: Game director Mathijs de Jonge just confirmed that all creatures in Horizon: Zero Dawn will be as detailed as the Thunderjaw.

Horizon: Zero Dawn’s Thunderjaw is made up of 550.000 polygons according to game director Mathijs De Jonge. In comparison – Killzone 3 used a maximum of 250.000 polygons for everything on the screen combined. 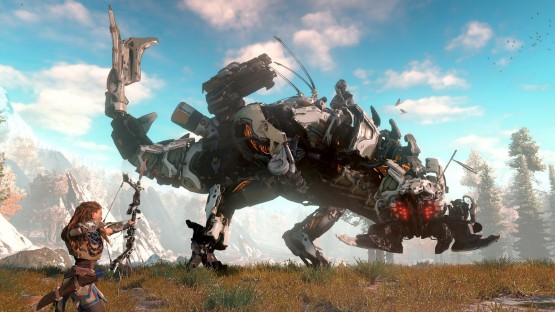 The game director tweeted this today as a Friday fact for Horizon: Zero Dawn. Last week the game director took to twitter to reveal that the ‘Thunderjaw’ equals the world’s largest animal that ever lived – 24x9 meters.

The Thunderjaw is seen in the trailer that Dutch developer Guerrilla Games showed off during their E3 press conference. In the trailer we can see the game’s main character Aloy fighting the gigantic creature, which uses his tail and disc-launchers, attached on both back hips, to attack Aloy.

It’s been a huge, huge benefit for the studio when starting… Although, well… we actually commenced on the Horizon Zero Dawn project before we commenced on Killzone Shadow Fall,” says Hulst in the latest issue of Official PlayStation Magazine. “So I was going to say it’s been a huge benefit that we started with a mature engine, but the mature engine came into existence whilst the development of Horizon was ongoing! But nevertheless, because we were working on Shadow Fall, of course, to obviously have an engine ready at launch of PlayStation 4 was a boon to us.

Horizon: Zero Dawn is scheduled for a launch on the PS4 in 2016.