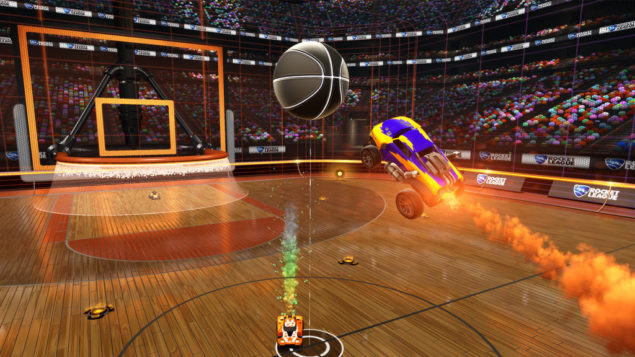 Rocket League addicts rejoice - the popular football/driving crossover is getting a brand new mode next week.

Hoops adds a basketball twist to the runaway hit, following on by the hockey mode released last year.

There's also a new arena to take full advantage of the mode.

Following the positive community reaction to the "Snow Day" Hockey Mode released late last year, Psyonix's new Hoops mode adds a dynamic basketball twist to the wildly-successful soccer-meets-driving concept. In addition to the mode itself, Rocket League Hoops will also come with a FREE new arena called "Dunk House," where the net itself can be used as a ramp for the ball, and Aerials and wall-play is the key to victory. The new Hoops mode update is FREE on Xbox One, PlayStation®4 computer entertainment system, and Windows PC via Steam and includes a NBA logo flag for all players.

If you fancy supporting the develop financially, you'll be able to pick up an officially sanctioned NBA Flag Pack for $1.99 or local equivalent. The pack contains the 30 flags of all the teams in the NBA.

Fans won't have to wait too long to try out the new free mode. It releases next Tuesday as part of a scheduled update on PC, Xbox One and PlayStation  4.

Rocket League Crossplay Is Still A Priority, But It Will Take Time, Says Psyonix CEO

Rocket League Is Being Added to Microsoft’s Xbox Game Pass