Google Docs, Sheets, and Slides are among the most used office apps that Google is currently offering. Many even call them direct competitors of the Microsoft Office. These apps are among the most popular when it comes to collaborations, as well as easy accessibility, and most importantly, they are available for free.

Google is always looking out to make changes to these apps and services and it is for the good as it keeps giving the users a reason to stick around and keep using these.

Google Docs, Sheets and Slides Users Get a New Document Save Status, Offline Indicator, and a New Comment UI on Android

The update Google is currently pushing changes the desktop interface responsible for showing the file save status across different services such as Docs, Sheets, as well as Slides. The new save status will now be shown directly next to the name of the document and shows more description than before. Users will be able to easily see whether the document they are working on is saved on the device locally or on the cloud. This will eliminate any confusion with regards to the offline access of the document. This also makes it easier for the document to be available offline. This feature is going to be available by default and will be rolling out to users in the coming weeks. You can read more about the features on their official post.

Additionally, Google is also bringing a mobile-friendly comment interface that will be making its way towards Google Docs, Sheets, and Slides. Their respective Android apps will now have a larger as well as a clearer interface which will allow the users to have an easier time seeing the comments as well as the context in which they are made. 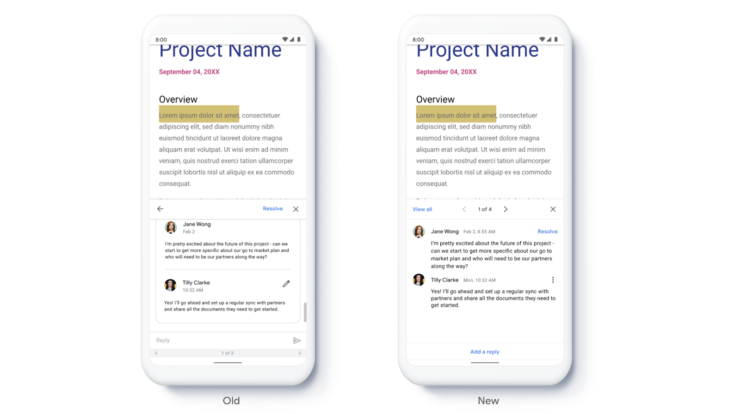 The new shortcuts and gestures are here to make it easier for the users to scroll through as well as respond to comments. Google has also added a "@" button that will allow users to simply mention someone. Tapping the button will result in the comment thread to open in full screen. The UI is currently rolling out and will be available to all Google Docs, Sheets, and Slides users.