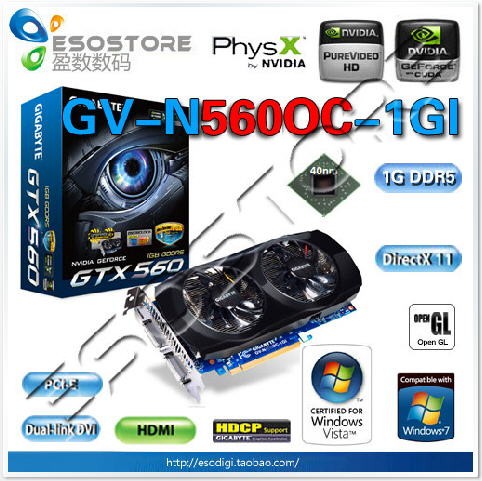 The upcoming Geforce 500 series  "GTX 560 Ti" From Gigabyte was pictured today which carry's the model number GV-N560OC-1GI. The card is based on the GF-114 chipset which is a refined version of the previous generation GF-104 chip on which the GTX 460 was built. It uses the same 40Nm Architecture. The card will feature a 1GB GDDR5 memory and will feature 384 Cuda Cores matching the performance of a GTX 470.

The pictures claim that the card is an OC'ed Edition which means that it'll come with a factory Overclock. The card is cooled by Gigabyte's own WindForce2X GPU cooler which uses A large aluminium heatsink which is cooled by two fans. Other features the GPU includes are Gigabyte's Ultra Durable VGA construction which combines a copper-rich PCB with high-quality components while combining the Nvidia exclusive features such as SLI, 3D Vision and PhysX. The card will be placed against the Radeon HD6950 looking at its specs and the price while not announced yet will be slightly higher than the reference models of the card. 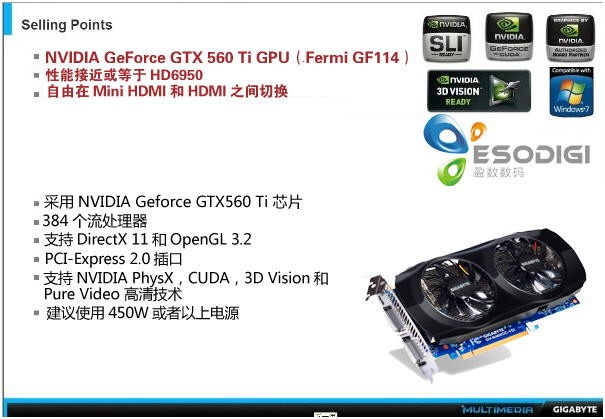