It’s fair to say the launch of Genshin Impact has gone according to plan. The free-to-play adventure, which combines a vast open world similar in style to Zelda: Breath of the Wild with complex interlocking JRPG mechanics has already been downloaded by 10s of millions and is likely on track to bring in $100 million (more than its total budget) by the end of this month.

That said, there are some who remain leery about the game’s approach to monetization. While the game is free-to-play, it employs a random lootbox-like “gacha” system for unlocking most of its characters and some high-level weapons. There is already widespread evidence of people spending hundreds, or even thousands, of dollars on the game, but what if you’re the more cautious type? What if your goal was to spend only roughly the amount of a full-price game – say, $50? What would that actually get you? As somebody who’s typically allergic to microtransactions, I decided to put that question to the test.

Note: All the in-game currency I spent for the purpose of this article was provided by Genshin Impact developer miHoYo for free or earned in-game. I have not spent any real-world money on this game.

There are a dizzying number of different currencies and collectibles in play in Genshin Impact, but gacha system itself is fairly straightforward. You unlock characters and weapons by buying “Wishes” (essentially randomized loot boxes containing a single item each) from one of several different “Banners”. Each Banner offers different characters, weapons, and rules, which you can check on at any time.

How much do Genesis Crystals cost?

Zenless Zone Zero Shows off its City, Combat, and a Boss Fight in 18 Minutes of Gameplay

So, how many characters can you unlock with $50 in Genshin Impact?

While I didn’t actually spend any money out of pocket, for the purpose of this experiment I traded in 6480 Primogems I got from miHoYo or earned in game (the amount you’d get for spending $50 for the first time) for 20 Acquaint Fates and 20 Intertwined Fates.

I spent 16 of my 40 Fates on the Beginner’s Wish, 20 on Ballad in Goblets, and the remaining 4 on the standard Wanderlust Invocation Banner. For that, I ended up with…

I also unlocked Xiangling, but she can be acquired through regular play fairly early on in the game, so she doesn’t really count. So, basically, for $50 I got 4 gacha-exclusive characters, only one of which was a top 5-star character. Not terribly thrilling for 50 big ones.

How much will $50 and all the freebies miHoYo is handing out get you?

In addition to the Primogems I got for being a member of the press, miHoYo is handing out a fairly generous amount of gacha currency to everyone who downloads the game. It felt like it was only fair to include that in the “What can you get for $50?” question. Currently everyone who downloads Genshin gets 3360 Primogems, 20 Acquaint Fates, and 10 Intertwined Fates. All combined, that’s the equivalent of 51 more Fates to spend on Wishes.

Since the Beginner’s Wish was now exhausted, I spent 30 of mine on the Ballad in Goblets and 21 on the standard Wanderlust Invocation. For that, I ended up with…

Ah, but my wishing wasn’t over quite yet. With every Wish you get a bit of an additional currency called Stardust, and if you pull a duplicate character, you get something called Starglitter. You can reinvest your Stardust and Starglitter in more Fates. I managed to get 13 more Fates, which earned me…

Let’s Tally This Up

After spending my $50 worth of Primogems and all the free gacha currency everyone gets, and adding the 5 characters you unlock through regular play, I ended up with a roster of…

I also got one 5-star weapon, three 4-star weapons, and a whole lot of 3-star filler.

Do I feel like I got value for my money?

Well, there’s two ways to look at this. There are currently 23 playable characters in Genshin Impact, and I managed to collect over half of them. These characters cover a wide gamut of elemental strengths and play styles, and I could probably pretty comfortably play through the rest of the game with this roster.

On the other hand, I only managed to unlock one of the eight 5-Star characters in the game (the main protagonist doesn’t really count). One of eight! For nearly the price of full traditional game! This is clearly where the gacha gotcha comes in – 4-star characters are easy enough to get, but if a 5-star is what you’re gunning for? You’re going to need to shell out.

Is there a cheaper way to get Genesis Crystals?

In addition to the standard Genesis Crystal bundles, miHoYo is also selling monthly cards for $5, that include 300 Genesis Crystals and a daily allotment of 90 Primogems for 30 days. So, you essentially get 3000 Primogems for only 5 bucks, but there’s no instant gratification – you have to wait a full month to get all your stuff. Clearly miHoYo is betting on folks not having the patience, but if you do, this is a solid option.

How many Primogems can you earn strictly through gameplay?

What if you want to go the entirely free-to-play route? How many Primogems can you actually earn through gameplay? The main way to earn them are Daily Commissions, which will give you 60 Primogems a day if you complete them all, for a total of 1800 a month. You can also earn more by finding chests, completing missions, and battling through dungeons and domains.

If you log in and play a couple hours every day, I’d say you could realistically earn around 3000 Primogems a month. So yes, if you’re very dedicated and patient, you could make a dent in the gacha system without spending anything, although it could be months before you score even one 5-star character (3000 Primogems will get you 18 Fates, so you’d need to work for 5 months to hit the 90 Wish pity barrier). 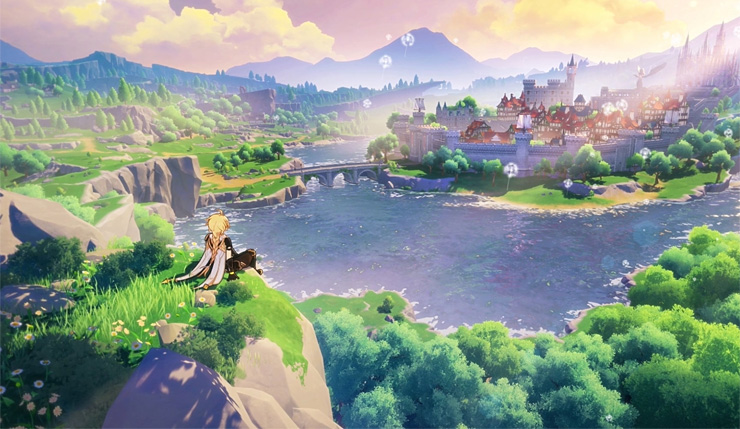 Finally, let’s get down to brass tacks – is Genshin Impact exploitative? Once again, there’s two ways to look at it. If you just want to explore the game’s world and story with a functional roster of characters, I’ve shown you can do that for a reasonable $50 investment or simply by logging in every day and playing/buying monthly cards if you’re the patient type. Genshin Impact doesn’t lock any of its core experiences behind a paywall.

That said, if those 5-star characters and weapons are important to you and you opt to really engage with the gacha system, yes, Genshin Impact is exploitative. No two ways about it. The 0.6% pull rate for 5-star items is shamefully low (most other gacha games offer rates between 1% and 5% for top items) and the “pity” system is rather insulting. Again, in order to be guaranteed a 5-Star item, you need to purchase 90 Wishes, which would cost more than $100 if you’re buying the standard Genesis Crystal bundles. And the pity system only guarantees you a character OR a weapon, so you might spend over $100 gunning for a new character and get some sword you don’t want.

So, do I recommend you stay away from Genshin Impact? Not necessarily (I’ll have a full review of the game later this week), but you should know what you’re getting into. If exploration and adventure is all that matters to you, this is a remarkable game in a lot of ways, but if you have notions about collecting all the characters, let me strongly encourage you not to bother. The way the gacha system is rigged right now, you won’t be able to “catch ‘em all” without spending hundreds of dollars (at least). Needless to say, if you’ve ever had an issue with gambling or similar free-to-play games, steer well clear. Ultimately, you have to decide for yourself whether Genshin Impact is for you.

Genshin Impact is currently available on PC, PS4, and mobile platforms. A Nintendo Switch version is also in the works, but is currently without a release date.