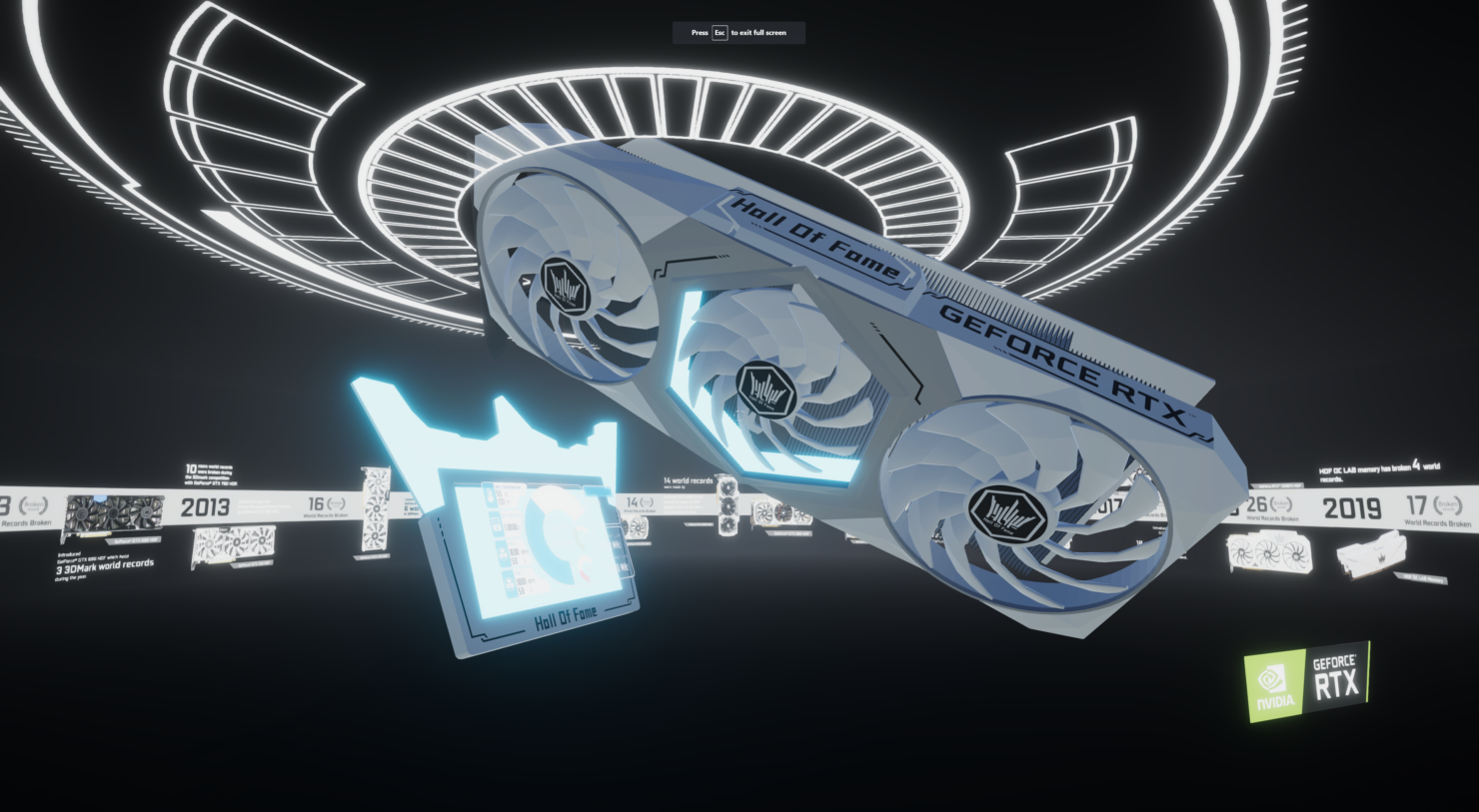 GALAX is hosting its Virtual Online Expo 2020 in which they have showcased a range of new tech products including their flagship GeForce RTX 30 HOF series graphics cards. The GALAX HOF RTX graphics cards have been featured in the Virtual Expo and anyone can enter it and see the card themselves by heading over to this link.

The GALAX HOF series is renowned for its insanely beautiful design schemes covered in all-white colors. The white color covers the entire card including the shroud, fans, backplate, and the PCB. It looks like GALAX is going for a sleeker look this time compared to the GeForce RTX 20 HOF series design which celebrated its 10th anniversary of the HOF brand. It also looks like most GPU markers are virtually showcasing their next-gen graphics card designs. AMD was the first one to showcase their next-generation Radeon RX 6000 series renders virtually within Fortnite & GALAX seems to have taken inspiration from them.

From what I can see, the rendered GeForce RTX 30 HOF series graphics card focuses more on the outer design aspects of the card. As for the design, the card seems to feature a dual-slot design & comes with a triple-fan cooling solution. These are new fan blades that have been incorporated by GALAX compared to the standard fan blades on the RTX 20 HOF series graphics cards. The two fans on the sides are wider than the one in the middle. The shroud features a hexagonal structure in the middle and the reason why the middle fan is slightly smaller has to do with the RGB LEDs that are featured around it.

The RGB layout is very interesting and will look even better in the final variant. The sides of the card feature the Hall of Fame and GeForce RTX brandings. This is still an early render so a lot of details are missing such as the PCB, power connectors, backplate design, and the I/O ports. With that said, the GALAX GeForce RTX 30 HOF series graphics cards will feature a white PCB with a stunning and reflective surface backplate.

Another interesting aspect of the card will be a bundled OLED bar that attaches to the card and displays useful information such as GPU temps, voltage, fan speed, clocks, usage, etc. This screen will feature the iconic HOF Crown and will be illuminated by RGB LEDs. The render is overly done with bloom so don't expect that in the final retail product.

Display outputs are likely to include the standard 3 DP and 1 HDMI 2.1 ports but we could also see some extra additions such as an OC switch and Dual BIOS switch on the PCB. The PCB itself will be rocking an extremely insane design that will be geared towards LN2 overclockers which have been a tradition for the HOF series cards. GALAX has told us that the card is expected to be announced by end of December or early next year.