Samsung is taking their V-NAND branding seriously and are looking to ramp up the 3rd generation of their revolutionary vertical NAND architecture with a new 256Gbit 48-layer 256Gbit architecture. 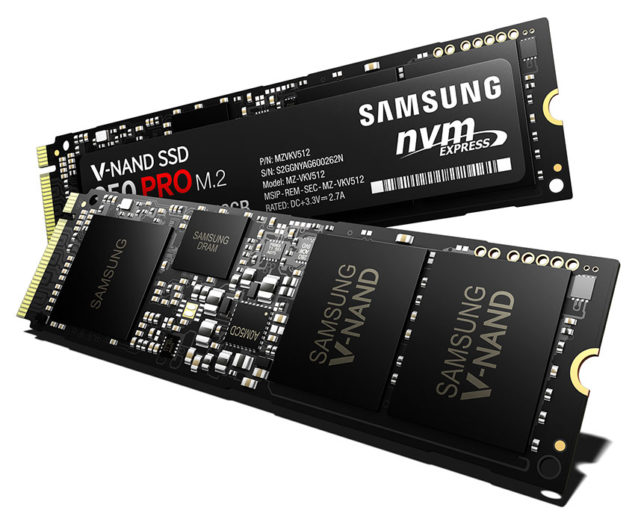 V-NAND getting a substantial upgrade by 2016.

The third generation of V-NAND from Samsung means that we'll be seeing a few new products by 2016. Initially they plan on releasing four separate products in their consumer line using the new technology. The 850 Pro and 850 EVO monikers will be carried over into 2016 as their flagship devices.

The 850 Pro will continue to be their flagship product, but upgraded with the 3rd generation V-NAND to increase capacity from a maximum of 2TB to 4TB in a 2.5" form-factor. The 850 EVO line is also getting similarly getting upgraded, with the M.2 SATA based model receiving an increase to 1TB of storage.

One of the better announcements that Samsung made is the availability of a new M.2 device, the 950 Pro. The 950 Pro will actually have the 2nd generation V-NAND though with NVMe and PCIE 3.0 X4 connectivity for a peak read speed of around 2.9GB/s. Unlike the previous generations PM951, which was similarly as speedy, the 950 Pro will be readily available at all major retailers. It'll start out with capacities of 256GB and 512GB next month, with a 1TB model coming out within a year.

And to celebrate their transition into a fully V-NAND lineup, Samsung is getting ready to use that branding to their advantage, putting on their retail and enterprise drives as a point of advertising.