The Game Bakers, an indie studio based in France, announced today their new title called Furi. 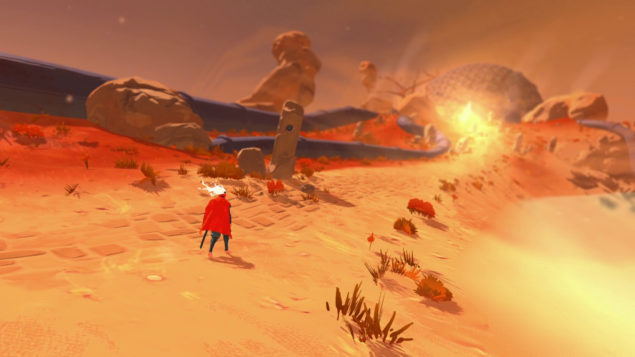 It's a hack&slash game focused on duels and frantic combat; here's what Creative Director Emeric Thoa said about it.

I have long dreamed of making a game of pure boss fights, with a focus on dueling and besting enemies who rival your own skill and strength. Furi is designed with Japanese action games in mind — games that reward skills and reflexes, with a character that reacts immediately, like Devil May Cry, any game from Platinum, or even the Super Punch Out series.

Furi will mix fast paced sword fighting with dual-stick shooting. The protagonist will have to defeat a series of deadly guardians who have been designed by Afro Samurai creator Takashi Okazaki; according to the press release, each one will have a unique combat style.

Here's a bit more about the game's history and design, along with the announcement trailer. Furi will be available in 2016 for PC and PlayStation 4.

The story of Furi starts ten years ago, when Emeric was asked what he would do if he could make his dream game. He came up with a game that would be one long boss fight. A boss fight against an opponent similar to you, not a gigantic creature or a demon. A boss fight that felt like a duel— a tense, exhausting, and utterly rewarding duel. Furi is the manifestation of this idea that stuck with Emeric, as he grew as a designer and set up The Game Bakers. Furi is a game where you fight for a reason. It's a game that teases you before the fight, while you walk toward your fate, the same way you would be pumped up and stressed before a boxing match. The combat gameplay is designed with Japanese games in mind — ultra fast-paced and responsive. Your character moves as soon as you send an input. Skills and reflexes are required to dodge and parry the enemies’ attacks.