Fallout 4 and the apocalypse that follows it has finally arrived as Bethesda launches their biggest blockbuster, AAA title for the year 2015. Fallout 4 has met all the expectations, scoring great reviews across the web and while our review will come in shortly to talk in more about the game itself, let's head over to see the various performance results and optimization guides for the PC platform which is the lead platform for Fallout 4.

First and foremost, if you have purchased Fallout 4, then it is advised to get the latest game ready drivers for Fallout 4 which are available from NVIDIA. The links are provided below for your respective OS version: 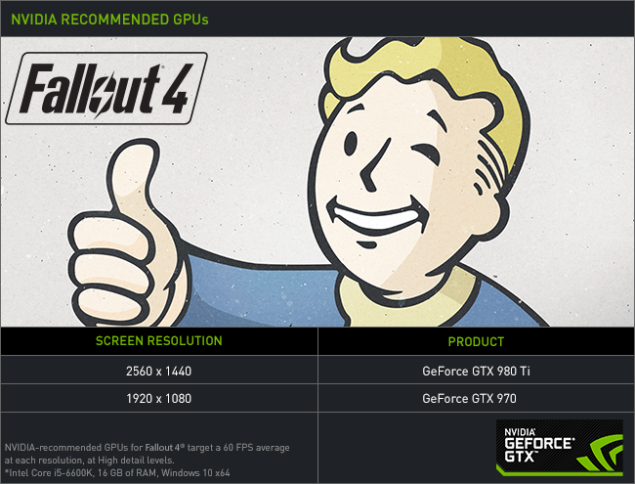 The PC platform is core to Bethesda’s games as they have been using PC as the lead platform for both their Elder Scrolls and Fallout series. The PC version of Fallout 4 will also be the lead version of the game featuring better graphics quality compared to the console counterparts (Xbox One and PlayStation 4). Talking about the graphics themselves, the scope of Fallout has definitely increased over Fallout 3. The game engine which is an updated version over Creation Engine (Not a totally new engine) allows Bethesda to create a massive world on their existing tool set but enhance the scope and make the world more denser for users to explore.

“As always, our world features fully dynamic time of day and weather. To create that volumetric light spilling across the scene (sometimes called “god rays”) we worked with our friends at NVIDIA, who’ve we worked with dating back to Morrowind’s cutting-edge water. The technique used here runs on the GPU and leverages hardware tessellation. It’s beautiful in motion, and it adds atmospheric depth to the irradiated air of the Wasteland. Like all the other features here, we’ve made it work great regardless of your platform.” - NVIDIA as a key partner to leverage image quality of Bethesda's Fallout 4 title.

NVIDIA has put in quite a lot of effort to optimized the game for their cards as shown by the prompt release of game ready drivers while AMD has yet to announce their optimized driver for Fallout 4. NVIDIA recommends that their GeForce GTX 970 is the best card to play the game on 1080P resolution with 60 FPS and all graphical details maxed out while the GeForce GTX 980 Ti is best for playing the game past 60 FPS on 1440P resolution with details maxed out and at 4K with 30+ FPS. The latest game engine uses Physical Based Rendering, Dynamic Volumetric Lightning along with several other tech to enhance visual quality, which is listed below: 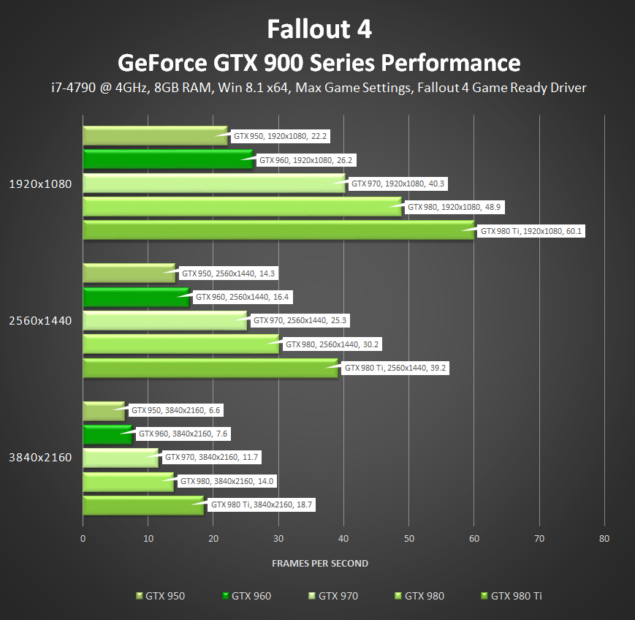 The system requirements for the PC version are pretty straight forward. The game has average requirements on the minimum front though the cards listed are not matchable as the GTX 550 Ti is slower than the Radeon HD 7870 while the Recommended requirements seem to be a bit more fair with a R9 290X advised on the red team front and GTX 780 advised on the green team front. One thing which is a compulsory requirement is a 64-bit operating system so if you are stuck on an older 32-bit OS, you can't run the game so start updating. You can see the requirement for yourselves below:

While we have had little time testing Fallout 4, PCGameshardware has brought up their own testing for the PC version of Fallout 4. Now it is advised to give the guys over at PCGameshardware a visit to look over their much detailed testing results but the conclusion is that the game is quite well optimized at 1080P and 1440P but 4K is only an option when running a fast card such as the GTX 980 Ti due to the higher memory and GPU horsepower requirements or PCs with CrossFire or SLI solutions which unfortunately are not supported at the moment. The main reason for the clear NVIDIA lead is due to the latest GeForce drivers which bring up to 25% performance boost over the 358.85 WHQL drivers. Since AMD has no drivers for Fallout 4 released at the moment, we can expect a good boost for the Radeons in the title once a new Catalyst driver pops up on whether AMD will wait for the Crimson driver release later in this month. The game is optimized quite well for entry level cards such as the Radeon R7 370 and the GTX 950 which can deliver better visual fiedilty and frame rate at 1080P compared to the console counterparts.

One thing was clear in the testing from PCGameshardware, the Fallout 4 PC version is the most optimized version of all the platforms since the site reported no error or crash during their two days of testing with different cards and is quite an achievement for the team over at Bethesda. The game runs well for all GPUs at 1080P and 1440P resolutions and too add up the sweetness, doesn't crash as often as older Bethesda titles which is a plus mark of the PC version over the console counterparts which are currently riddled with bugs and poor framerate issues.

NVIDIA has published their performance tweaking guide for Fallout 4 which lists down the total of 20 settings available in Fallout 4 and what kind of affect they will have on system when tuning them from low to high or vice versa. As with other gaming title, enabling more graphics intensive features leads to better image quality to be displayed at the cost of low frame rates. In no magical situation does a better graphical setting means higher performance game as more features and effects require more graphics processing power and higher memory pools to render the image quality set by the user. If your GPU is not capable of handling these extra quality features, then it will lead to poor performance and in some cases, even lower image quality.

You can't increase the quality of water in Fallout 4, which appears to have three set-in-stone LoD levels, but you can turn off several of its features to improve performance on slower systems. To do so, simply change "1" to "0" on the following config file lines:

Listed by NVIDIA themselves, the graphics settings which seem to make most notable impact on graphics performance include uGrids, Shadow Quality, Shadow Distance, God Rays, Grass Fade and Decal Quantity. Lowering the texture or shade on these settings will lead to far better performance or better image quality. Overall

There's no doubt that we have all waited 7 years to see the launch of Fallout 4 and we are very excited to bring you our own testing and review of the game in a few days. The game has launched today and will be available for users in the US and EU region to play on 10th November or should I say, just a couple of hours. Overall, the game is optimized well for GeForce cards and with new AMD drivers, we can expect better performance for the red team too.