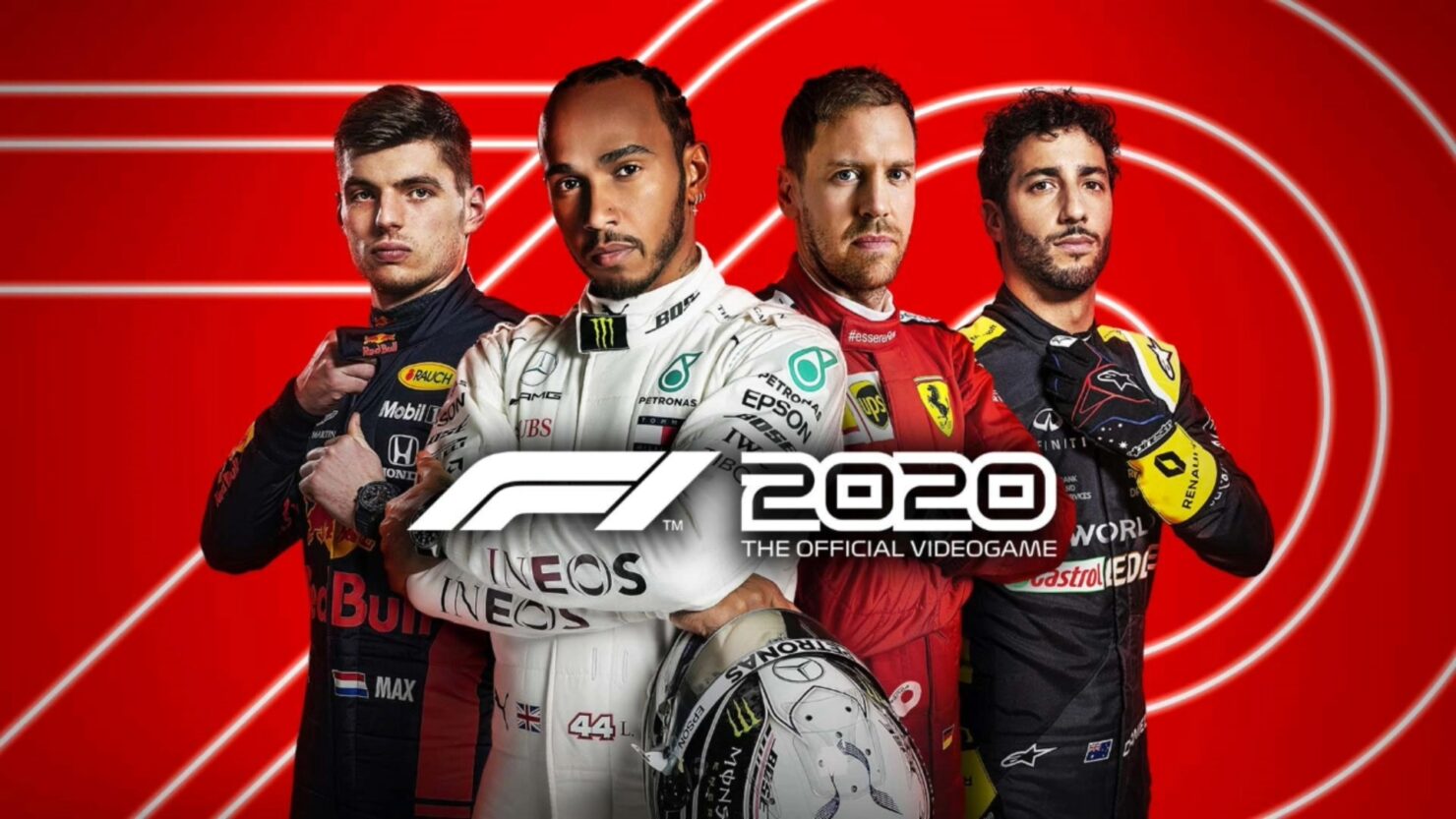 Codemasters have been put in a slightly awkward position with the F1 franchise this year. Each and every year the studio has followed the sport, linked up with the teams, riders and F1 as a whole. This has let them get everything as close to perfect as they can. Codemasters have been unable to see this in action due to the Coronavirus so getting everything will have been a challenge. It's a testament that F1 2020 is playing so well despite these challenges. 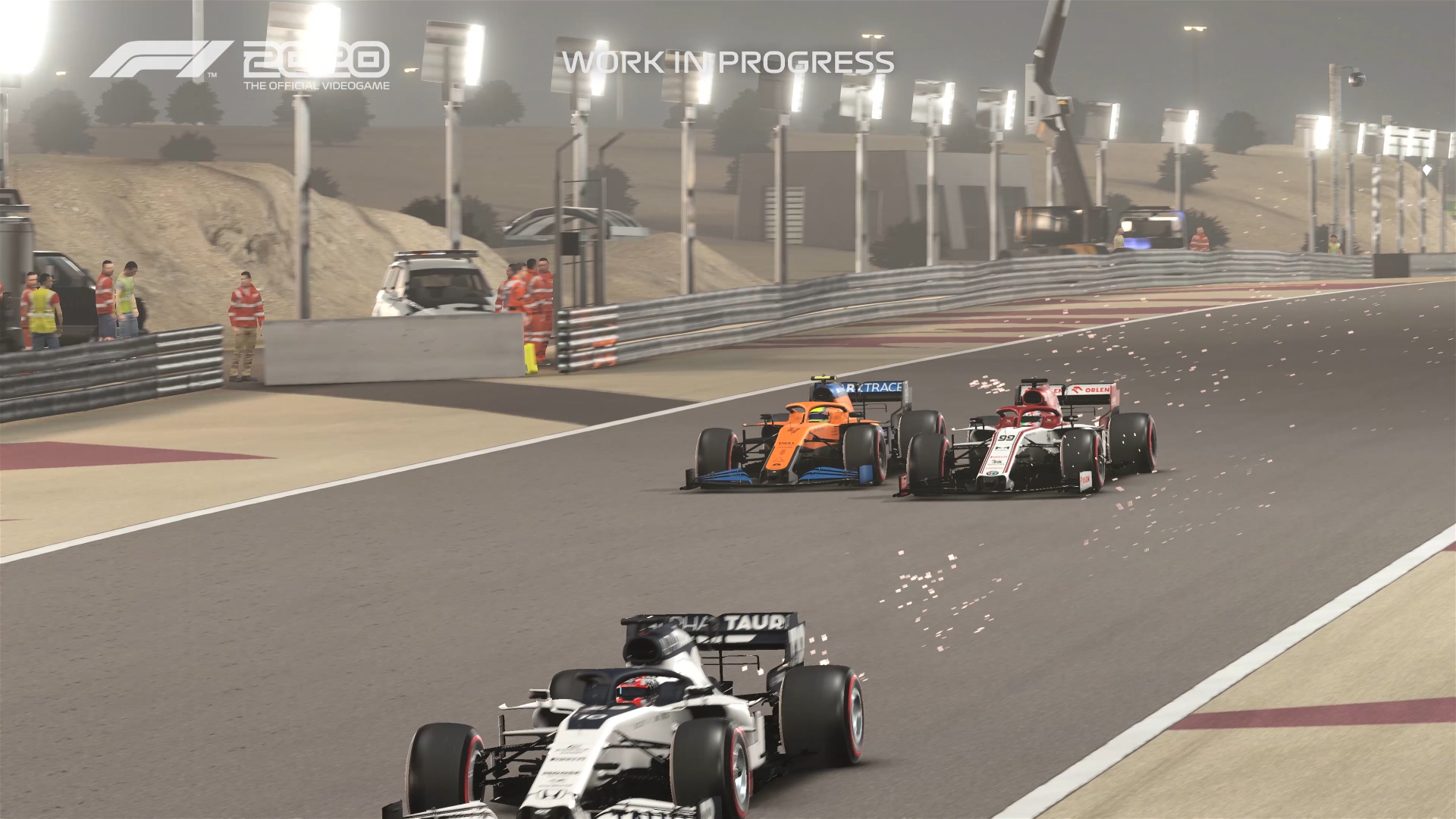 I've recently been able to have a hands-on with F1 2020 as well as take part in a group Q&A session with Lee Mather, game director from Codemasters, so there's a lot of information to process. The version I've been given access to features seven different tracks in either Grand Prix or Time Trial modes, letting me use any of the twenty F1 drivers racing for the ten teams. While only seven tracks are available, all twenty-two will be available when the game is released.

Before we talk about the things I've been told about, let's cover what I've experienced - the racing itself. Already I would argue there are immediate improvements, though it could also be my brain not remembering correctly. What I do know is that I've never felt more comfortable when behind the wheel in an F1 game, with every aspect of the car and the physics just working well, the sheer feel of the speed combined with the downforce that's keeping you on the track.

I need to make it clear, I've been racing around primarily on the experienced proficiency setting, which means I've had a fair few assists helping me along the way. The reason for this is simple: I'm crap at racing simulation games. I only try the no-assist route when I'm reviewing the full game so I can get a full experience of the simulation itself. Here, I'm wanting to see if I can have some fun - I can.

Across the seven tracks, I've taken on the role of Vettel and even won a race or two. I've taken in the sights of Bahrain and Barcelona, as well as checked out the new inclusion of Hanoi and Zandvoort. All throughout the game looks and plays great. The AI is more competitive, although I have seen the AI collide once or twice - one time on the straight in Barcelona, where it just didn't make any sense for a collision to occur. 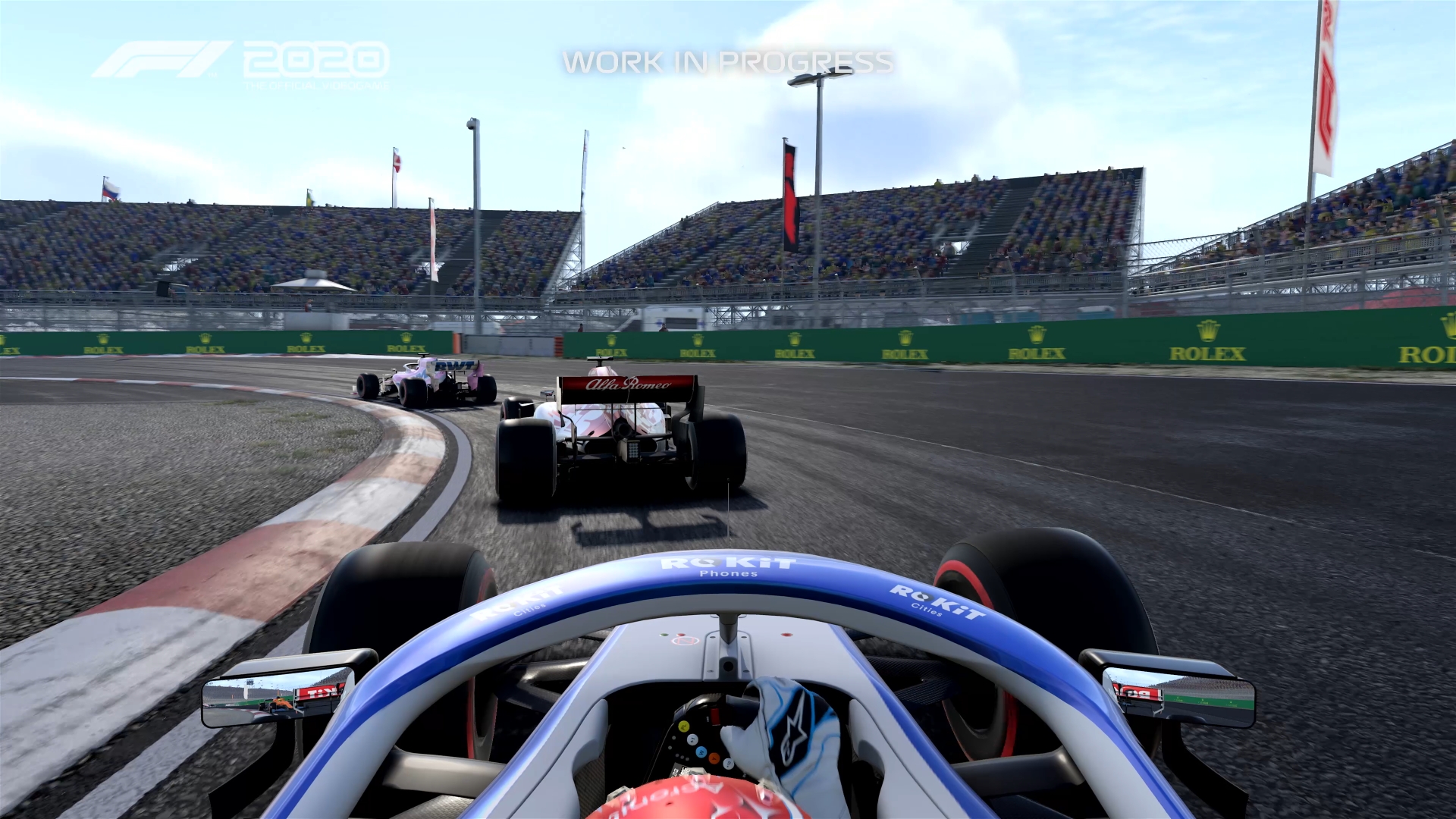 Speaking of collisions, I've also had a few myself and I'm starting to think that my constant complaining about the AI repeatedly penalising me, despite the fact it wasn't my fault, has finally been picked up on by Codemasters. Out of the seven collisions that I remember, two of them that were my fault, I was only penalised three times. Maybe the game decided the third time was my fault and I'm just biased, but it's a marked improvement from earlier outings where I'm certain the game code just read "IfCollision = True, Run BlameChris.scrpt".

So this is one of the features that was touched upon in the group Q&A, the improvement to the game AI. Particularly, the decision-making AI. So it isn't going to be exactly like real-life because this is, first and foremost, a videogame. Certain aspects that would be looked at in real life, such as somebody perceived as obstructing a rider by driving too slow, may not be experienced here. What Codemasters have done is factoring in more when determining the cause of an incident.

As I've already said, the AI, in general, has seen an improvement. This is likely going to be a major benefit when thinking about the core new feature of F1 2020, My Team mode. In My Team you will be running your very own F1 team, the eleventh team on the grid. In creating your team you create your own logo and colour scheme, before getting behind the wheel and trying to win racers for your team. However, you won't be alone. 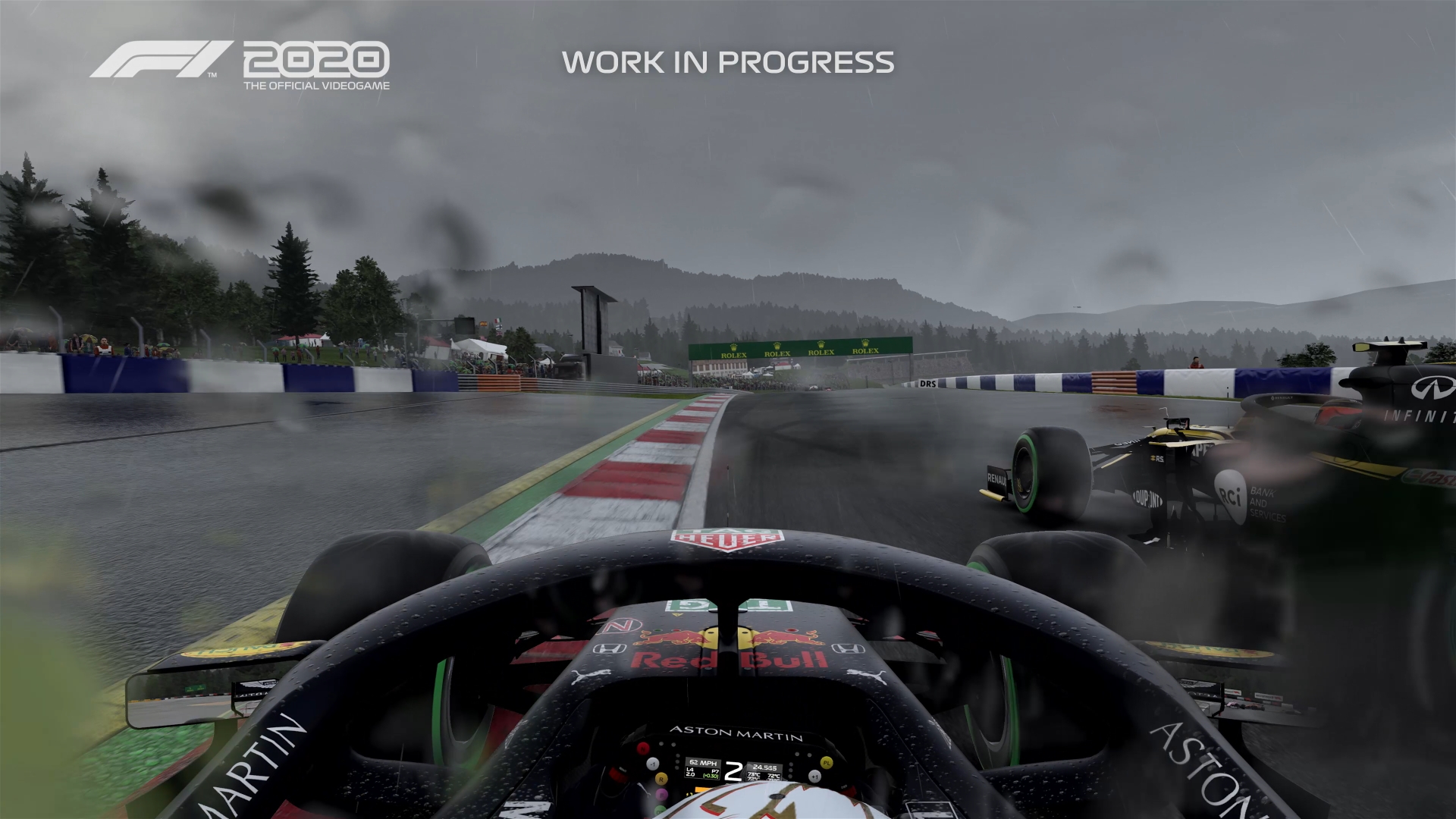 Naturally, you have a second driver. You'll hire this driver from the funds you have available, which will be based on your primary sponsor and secondary sponsors. The money isn't unlimited, so you'll start by choosing which of the four power units (Renault, Honda, Ferrari or Mercedes) you'll be using in your cars. Your first team-mate will end up being a Formula 2 driver because Hamilton, Vettel, and others simply won't join you until you've got the right support mechanisms.

You'll be able to manage your team by sending drivers out on training camps, letting drivers boost their statistics. While the driver is away, he can't help out in one of the departments in your team or even doing tasks for sponsors. From what I've been shown, there will be a fine balancing act between managing your facilities, such as aerodynamics and chassis to personnel and marketing, to name just a few. It's a more hands-on experience than the series has ever known before and I'm personally looking forward to My Team more than anything else.

F1 2020 also has the returning career mode that you'll be used to, with improvements to this mode being made by bringing over elements from My Team. Within career, there are also changes to how contracts are negotiated, letting you get more money for yourself which lets you spend more for yourself on perks and buffs. Other changes to the career also include adjustments to how interviews are done and how they directly impact the rival feature, one that I wasn't overly fond of in the previous iteration due to how shallow it felt.

When it comes to racing through a season, you will be given the choice to race a full-length 22 track season or either a 16 or 10 race reason, letting you pick and choose which tracks you want to drop. A nice feature if you're also wanting to have a shorter and more concise season, if only for time-management purposes. 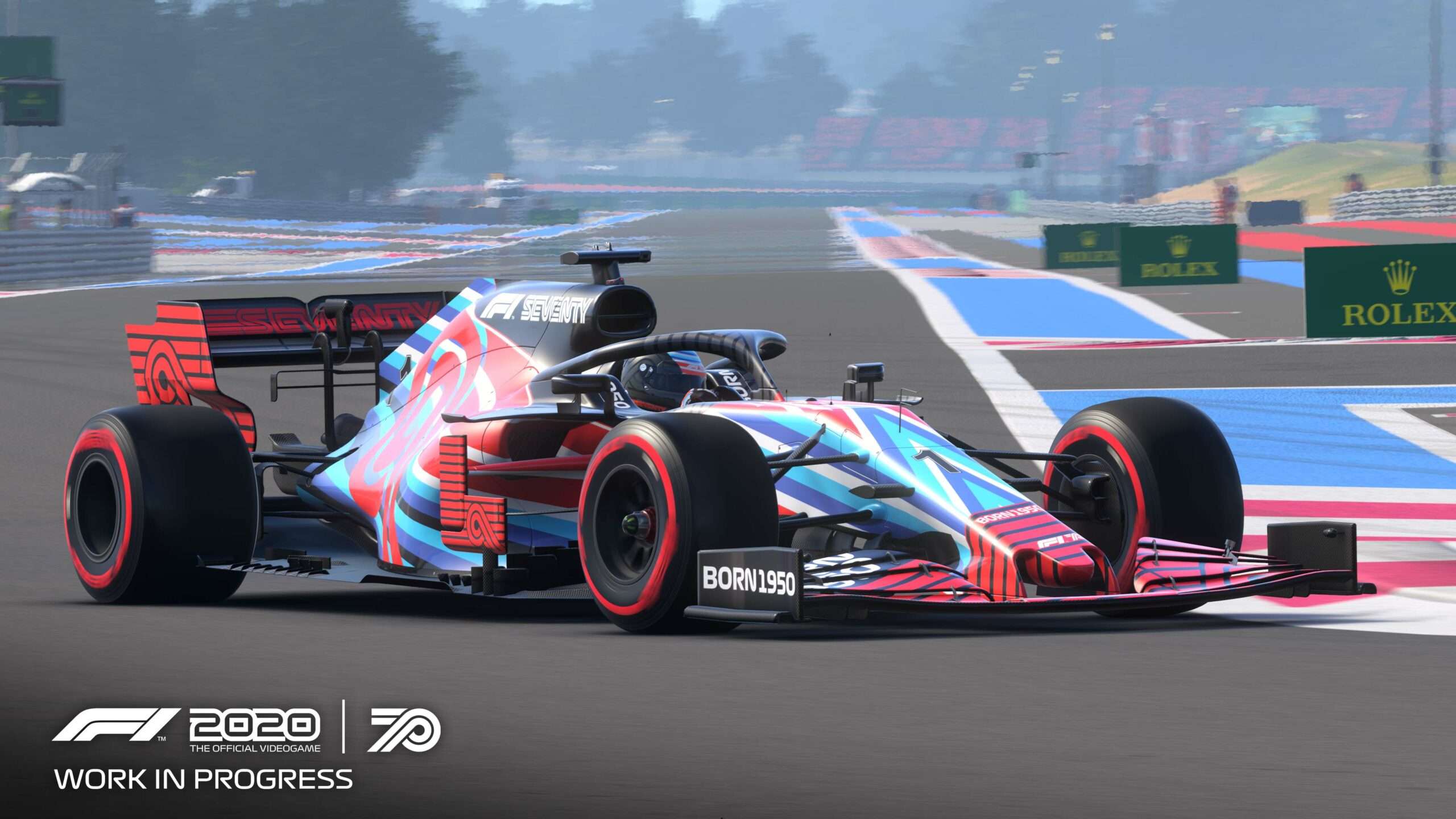 There's a lot of other aspects that I've been told about but yet to experience but I'll keep it brief. Codemasters is acutely aware that games like F1 can be daunting if you're not good at racing games, despite even the highest level of assists. A new inclusion is a casual mode, which reduces the punishment of off-track surfaces and can also help with AI-assisted steering. In addition to this, it is said to feature as well as easier to navigate and simplified options, reducing the complexity of the pre-race weekend and other aspects that come with the sport.

Finally, I want to mention that F1 2020 will come with a split-screen mode, something that is sorely missed from games recently. Other smaller features include a customisable HUD for all platforms, including the ability to have a rear-view mirror. ERS is managed automatically now, making it more functional and reportedly mirroring the way the real-life ERS is managed. A lot more will likely be fleshed out by Codemasters before launch, but I'm mostly waiting for the My Team mode now.

F1 2020 will be released on the 10th of July, 2020, for the PC (pre-order available via GMG at 10% discount), PlayStation 4, Xbox One, and Google Stadia. There is also going to be a Michael Schumacher limited edition, featuring extra content in the form of skins and cars and also releasing three days earlier, launching the game on the 7th of July, 2020 for those people. Either way, as always I genuinely expect the game to be great on launch because Codemasters just have a strong track record of putting out great racing games.