EVE Online has a new mini-game within it that actually contributes to real-world science. The so-called Project Discovery will make use of the thousands of players to help crowd-source real scientific results by helping to characterize proteins in the human body. 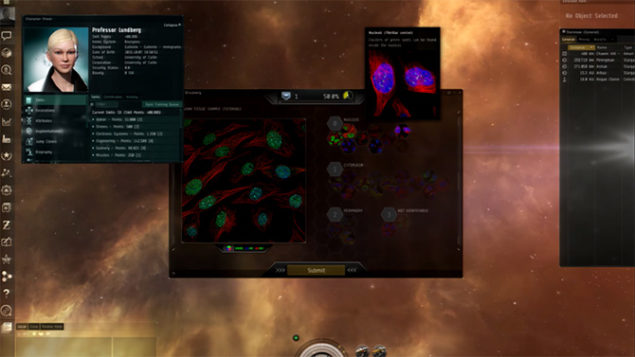 At EVE Vegas that took place on October 23rd, Emma Lundberg announced a partnership between CCP Games and researchers from Reykjavik University, Iceland and The Human Protein Atlas project to map subcellular structures of the human body with the inclusion of a mini-game in EVE Online.

Gamers will be rewarded with ISK and what's known as Sister's of Eve loyalty points and they'll be contributing to actual science. The work done in the mini-game will contribute to the Human Protein Atlas, which will be a catalog of all know proteins in the human body.

This sort of crowdsourcing is an interesting use of resources when applied to a video game. Certainly mini-games of sorts have been created to use the observational powers of thousands of individuals at once to help to solve problems. SETI used to use the SETI Live platform to enlist others to help find wayward signals. NASA has even set up their own platform to have individuals classify potential candidates for Earth-like planets that are found from the Kepler mission. Zooniverse is a website dedicated to letting everyone be a researcher and share their skills and talents in the name of science as well, not to mention the various distributed computing projects that exist for stellar, biological and other sciences.

As an in-game element, this is a first, and I do hope it catches on and builds momentum. It would be even better if some novel discoveries could be found this way too. So if you happen to be an EVE Online player, I urge you and your friends to go forth in the name of science to help classify some proteins. This time the cake isn't a lie.