A SpaceX render from 2017 showing its Starship upper stage deploying a satellite to orbit. Image: SpaceX

While Space Exploration Technologies Corp. (SpaceX) is moving full speed ahead with building the first booster test prototype of its Starship next-generation launch vehicle system, the company's chief executive officer, Mr. Elon Musk, hinted that his company might conduct another highly-anticipated test of the platform. Starship's primary goal is to conduct missions to Mars, but SpaceX also plans to use it in other areas such as point-to-point flights on Earth. These flights are planned to take place at eye-popping speeds of up to 18,000 miles per hour, as SpaceX plans for its rocket to escape the Earth's atmosphere and then use associated benefits to travel faster than traditional airplanes.

Now, courtesy of an interesting comment made by the company's chief executive officer (CEO) Mr. Elon Musk on Thursday, we might be nearing the world's first test flight of a hypersonic rocket designed for traveling on Earth.

With the budget proposals making their way to Congress over the past month, the United States Air Force requested the governing body to allow it to spend $48 million for evaluating rockets that could allow it to transfer cargo to any point on the globe.

These rockets should have a payload capacity of 100 tons and be capable of reaching any point on the planet within an hour. A cursory look at Starship's user guide reveals that the vehicle is capable of delivering 100 tons to Low Earth Orbit (LEO), and SpaceX's 2017 presentation describing these plans also outlined that its vehicle, called the BFR (Big Fat Rocket), could conduct most long-distance flights in less than half-an-hour. The longest of these flights shared by SpaceX was a trip from Hong Kong to London, and the company outlined that its rocket could travel the trip's distance of nearly 10,000 kilometers in just thirty-five minutes. 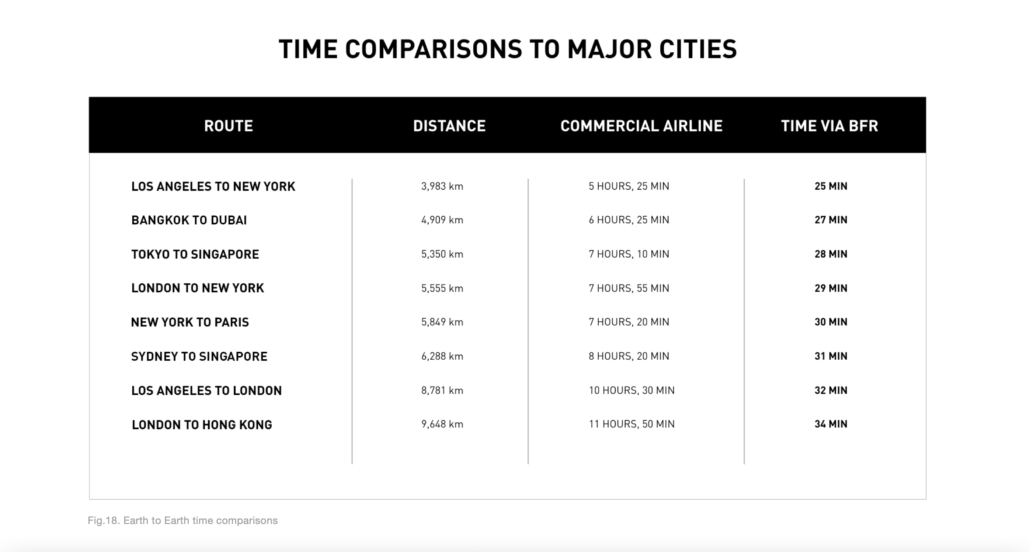 In its request, the Air Force asks Congress that:

The Department of the Air Force seeks to leverage the current multi-billion dollar commercial investment to develop the largest rockets ever, and with full reusability to develop and test the capability to leverage a commercial rocket to deliver AF cargo anywhere on the Earth in less than one hour, with a 100-ton capacity.

A major component of this capability will be to study how a rocket can be loaded with 100 tons of cargo and whether it will be possible to land it on locations of choice, in addition to determining if the cargo can be air-dropped.

While the Air Force refused to show any favoritism towards SpaceX in a press conference earlier this month, Starship is the only vehicle currently marketed for point-to-point Earth flights. Others, such as those from the United Launch Alliance, are designed for singular uses such as placing satellites in orbit and are unfeasible for Earth flights since they cannot reland. SpaceX's Starship is the only proposed rocket that plans to reland its upper or second stage - a feature that aims to improve the vehicle's reusability over its predecessors.

We might use SN16 on a hypersonic flight test

A hypersonic flight test, as Musk calls it, would involve the first stage traveling at speeds in excess of 3,000 miles per hour. Given that SpaceX estimates that Starship can travel 10,000 kilometers (~6,213 miles) in half an hour implies that the rocket can theoretically reach an astounding speed of 12,000 miles per hour.

This speed is well within the range of what SpaceX believes Starship can travel at. A video shared by the company in 2017 outlined that Starship can achieve a top speed of 27,000 kilometers per hour or 17,000 miles per hour.

However, the video also revealed that the Starship upper stage would require the first stage booster to lift off and reach its desired altitude before separating and proceeding on its own to its destination for a final landing. Therefore, if Musk's planned hypersonic flights intend to mirror SpaceX's 2017 plans, then we'll have to wait for a couple more months at the minimum before his company conducts its first hypersonic flight test with the rocket. Additionally, it's unlikely that SpaceX will risk a full set of engines to achieve Starship's top speed of 27,000 kilometers per hour during the first test due to the cost and time requirements of manufacturing the highly complex engines.