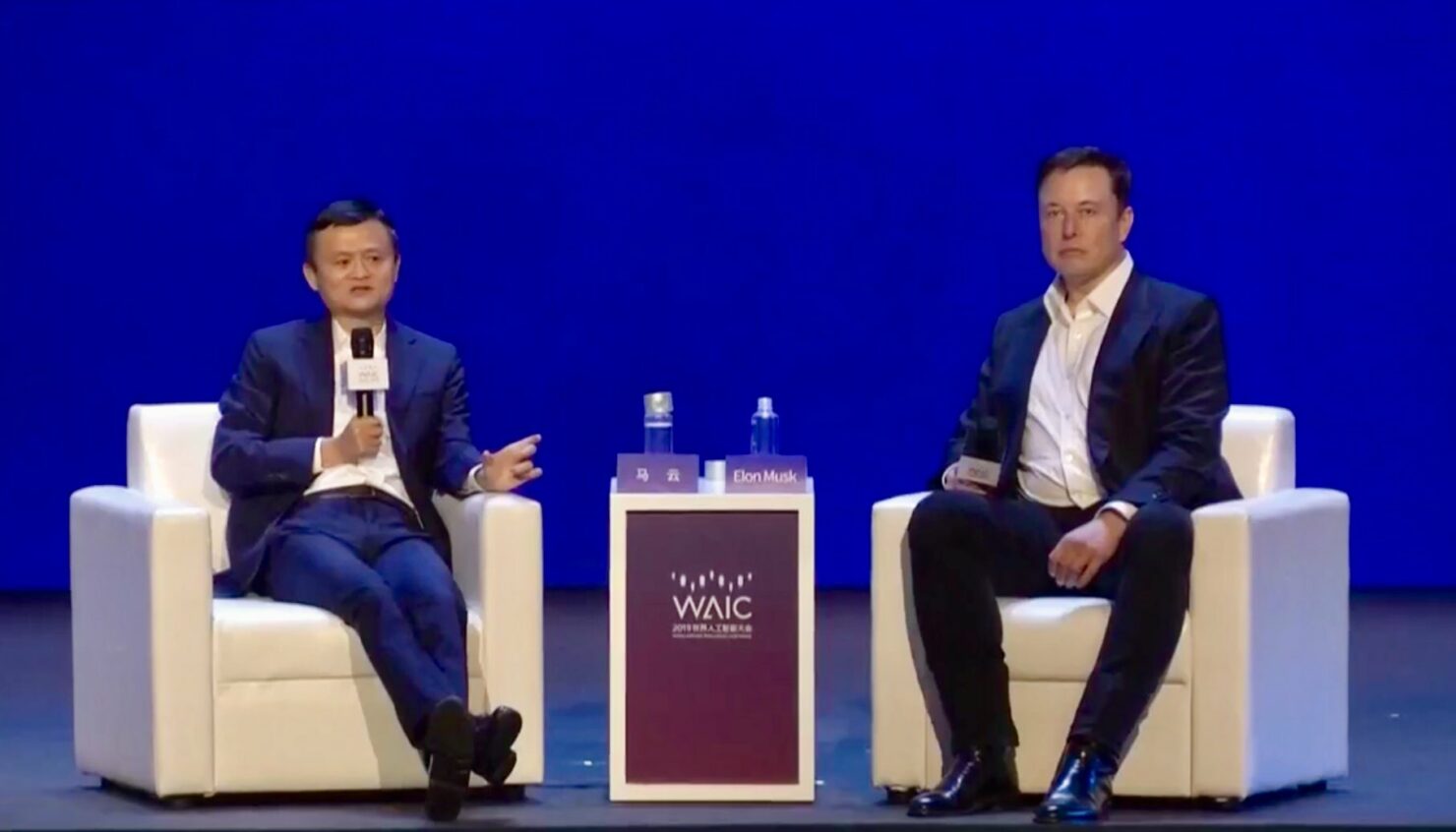 But while one would expect the two technology luminaries to be able to articulate a concrete and lucid vision for what a future where AI is part of life looks like, instead the audience at the conference was treated to an awkward 45 minutes of stammering and pontifications on the impact of AI on society. While both sides had their quotes, there wasn't really a conclusion on what this new society might look like.

Instead, we had sound bites such as Ma saying on stage that with the help of AI, humans will only need to work 12 hour weeks because there simply won't be the same amount of work. The irony, or hypocrisy, of this statement, is that Ma is a champion of the China tech sector’s infamous 12-hours-a-day, six-days-a-week routine, so common it earned the moniker 996. Ma also brushed over the issue of a 12-hour workweek on the wages in the labor market: will people be paid the same if there's that much less work to go around?

While this would make a good point to engage with, Musk wasn't up to the task. Instead, he just pivoted to talking about how AI would make jobs "pointless" and the last job in the world would be writing more AI code. "Study engineering, physics, or art" was his suggestion.

“Over time, AI will make jobs kind of pointless.”

Here’s what @elonmusk recommends at the World AI Conference in Shanghai with Jack Ma #世界人工智能大会 pic.twitter.com/1L2veTOUqS

Musk pivoted to a plug about Neuralink, a platform that would act as a gateway between people's brains and computers. Computers are becoming much more intelligent than humans and “we will be far, far surpassed in every single way. I guarantee it,” Musk said on stage. That considered, why don't we augment our own intelligence with that of a computer, Musk pitched, talking about the potential of Neuralink.

"Computers may be clever, but human beings are much smarter. We invented the computer—I've never seen a computer invent a human being," Ma responded.

Eventually, the conversation drifted towards Musk's business ventures such as the Boring Company -- which is planning a China expansion soon -- and Tesla, which is building a new Gigafactory within China to supply the China market with Teslas minus the tariffs.

Ma took the opportunity to throw a few snide remarks about Musk, who seemed more interested in discussing his business ventures rather than the topic at hand.

"I appreciate you want to go to Mars, but we need to look after people here on Earth," Ma said.

For better or for worse, AI will be the defining disrupter of the economy and society during the next decade. China will be at the forefront of this disruption given its firms' massive investments within the industry.

This is exactly why the industry needs a self-reflective discussion and intelligent debate. The World Artifical Intelligence Conference's keynote, with two of the most notable names in the industry, was supposed to be the venue for this first big debate but nothing of substance emerged.

This is disappointing because publicly in the last few years the two have had opposed views on the potential of AI to reshape society and have expressed them in ways that are more complex and interesting. At the technological determinist level, both are in agreement of the disruptive force of AI they don't see eye to eye exactly on its ultimate outcome. Both agree that the increased level of efficiency AI would bring would cause some pain as parts of the economy are made redundant. But Ma sees light at the end of the tunnel while Musk sees catastrophe.

World's strongest reminder for why there' a thing called 'moderators' & why they need to be paid. Coz the world's richest, smartest & smoothest certainly ain't gonna moderate themselves. https://t.co/3zDPDBGKG1

AI will bring certain people “more pain than happiness,” Ma said at a 2017 conference, while warning that AI would be as disruptive to the economy at-large as his e-tailer Alibaba was to the retail sector. “Social conflicts in the next three decades will have an impact on all sorts of industries and walks of life so machines should only do what humans cannot. Only in this way can we have the opportunities to keep machines as working partners with humans, rather than as replacements."

But for all the social ills of AI Ma brought up, there's also the bright side. Ma, ever the optimist, said at a 2018 conference that for all the challenges AI would bring, there are also opportunities. “New Manufacturing will soon bring a wave of threats and opportunities to the manufacturing industry in China, and around the world,” he said at a 2018 event. “We must be prepared, both mentally and in every way possible.”

“Instead of increasing anxiety, we should face up to (the trend) directly and take the responsibility to help people better adapt to this revolution.”

Musk, on the other hand, isn't as optimistic.

He's said before that AI is ultimately a fundamental risk to human civilization on the same level as nuclear weapons. It's something that governments will want to control.

“I have exposure to the most cutting edge AI, and I think people should be really concerned by it,” he is quoted as saying by CNBC. “AI is a fundamental risk to the existence of human civilization in a way that car accidents, airplane crashes, faulty drugs or bad food were not — they were harmful to a set of individuals within society, of course, but they were not harmful to society as a whole.”

In 2017, Musk urged the United Nations to take action against the dangers of autonomous weapons, known as “killer robots”. He has also described AI as humanity’s “biggest existential threat”, comparing it to “summoning the demon”.

”[Governments] don’t need to follow normal laws. They will obtain AI developed by companies at gunpoint, if necessary".