EA Dismisses Concerns of Battlefield 1 and Titanfall 2 Cannibalizing Each Other; New Star Wars in FY18

Y16 was a phenomenal year for Electronic Arts as we connected hundreds of millions of players to great new games, and helped them connect with each other through rich and dynamic live services. The year ahead is packed with excitement. Fans are thrilled with the intense action and epic scale of Battlefield 1, our EA SPORTS titles will take major leaps in innovation, and we’ll bring new experiences from our most popular brands to more players on more devices.

The release schedule confirmed what we already knew: Titanfall 2 and Battlefield 1 will both release this Fall. An investor asked about the two games, both first person shooters, potentially cannibalizing each other but Wilson dismissed the concerns and added that EA feels very strong positioned within the genre with two AAA games that use very different settings. 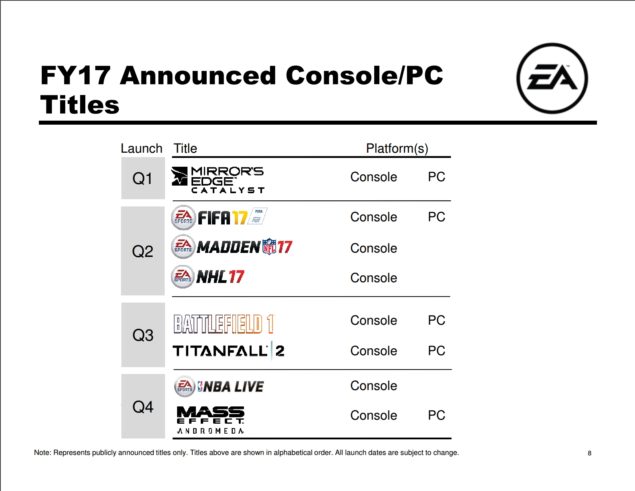 Among the financial highlights, there's surely EA being the first publisher in the Western for FY 2016 on PlayStation 4 and Xbox One.

• EA was the #1 publisher on PlayStation 4 and Xbox One consoles in the Western World for fiscal year 2016 based on available sources and EA estimates.
• EA was also the #1 most downloaded mobile game publisher in calendar year 2015, according to App Annie.
• More than 54 million unique players engaged with our EA SPORTS console titles during fiscal year 2016, up 65% from last year.
• Star Wars Battlefront expanded our player base as more than 15% of Star Wars Battlefront players were new to the EA ecosystem.
• In Q4, there were 9.4 million unique players across EA’s Battlefield titles.
• The Sims 4 player base grew by nearly two-thirds throughout the fiscal year, and The Sims FreePlay on mobile reached 200 million installs life-to-date.
• Madden NFL Mobile monthly active players grew 30% in Q4 over the same quarter last year.
• Star Wars Battlefront, a successful new franchise, sold in more than 14 million units in fiscal year 2016.

During the conference call, it was also confirmed that Electronic Arts expects 25 million new consoles (PS4 & XB1) to be sold in 2016 in addition to the 55 million sold in 2015.