Electronic Arts have revealed their next generation action packed first person shooter known as Battlefield Hardline. The game being co-developed by Visceral and DICE would hit store shelves on 21st October 2014, available for both current and next generation platforms which include PC, PS3, PS4, Xbox 360, Xbox One. 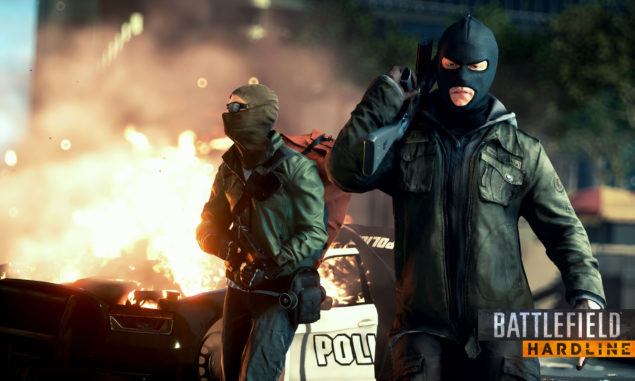 The combat and gun play shown in the trailer feels a lot like Battlefield 4 but the gameplay is unique delivering a totally new experience from Battlefield's all-out warfare. The gameplay mode "Crack The Vault" showed a team of thieves who are supposed to capture the loot from a destination and try their best to escape with as much as possible while other players playing as S.W.A.T are trying to hunt them down. Both teams have access to several vehicles and the map shown off even features LEVOLUTION where a huge crane falls off from a building that's under construction and destroy's the building in its parallel making debris fall over players resulting in instant death.

Being developed by Visceral who are well-known for their Dead Space Trilogy which is also regarded as one of the best survival horror and action title to be released, the developer is taking a turn from Third Person Shooters into the First Person Shooter world. With games like Army of Two and Dante's Inferno, Visceral set new standards of how game story plays into the field and while the story of previous Battlefield games haven't been much of a deal breaker for the game itself (aside from Bad Company Series), its the multiplayer which has made up for the game. The game would continue the two year shooter cycle that EA kicked off with Medal of Honor and Battlefield. The recent Medal of Honor entries didn't live up to the claim and hence EA moved to Visceral to develop a new action FPS title for 2014 while DICE focuses their efforts on adding more content to Battlefield 4 and start initial works on their next title which is far from release.

Battlefield Hardline is a game that is not like any other game in the series. Battlefield has always been a name associated with military shooters just like how Medal of Honor was once associated with War simulations. EA's Battlefield Hardline cuts away from its military roots and explores the more urban roots as we play games of cops and robbers where you get to play either of the faction. Both the story and multiplayer are being handled by the developer themselves along with some help from Ghost Games (developers of NFS: Rivals). The game will be built on the Frostbite 3 engine which is powering the bulk of EA's 2014-2015 portfolio such as Garden Warfare, Dragon Age: Inquisition, Star War Battlefront, the upcoming Mass Effect and Need for Speed titles.

The game revolves inside City blocks with access to several areas for a seamless experience. We have already seen how well Frostbite scales in closed door and open world environments if we look at Operation Metro, Siege of Shanghai and then move towards the larger maps such as Caspian Border, Silk Road, etc. The gameplay mode consists of Blood Money, Heist, Bomb Squad, Capture The Flag, Rush, Sabotage, Elimination, Team Superiority, Turf War, Team Deathmatch.The closest thing that comes to Battlefield Hardline is Pay Day: The Heist and Counter Strike but this takes the concept of both games, combines them and takes it to the next level. Players have the choice to select between two factions, Thieves and S.W.A.T, each with a variation of weapons and play styles. The BETA arrives first on PC and PlayStation 4 available from today running at 60 FPS and 1080P resolution on PlayStation 4. You can sign-up for the BETA at the following link:

Battlefield Hardline - Into The Jungle: