Update: The PNY Quadro M6000 has been leaked ahead of its launch in a presentation booth. The card is everything we had previously confirmed and the only update is that it features a single 8-Pin connector as opposed to dual 6-Pin power inputs at the back of the board. The card looks neat and is ready for official announcement today at 9:00 AM (Pacific Time)

While all of us are expecting NVIDIA to launch their GM200 based GeForce GTX Titan X at their GTC 2015 event, it seems like we have all forgotten about the card that started the GM200 leaks. A few months ago when we didn't knew about the Titan X, we were anticipating the launch of NVIDIA's latest Quadro M6000 GPU at the GTC 2015 conference and it seems like the card has been leaked ahead of its launch. 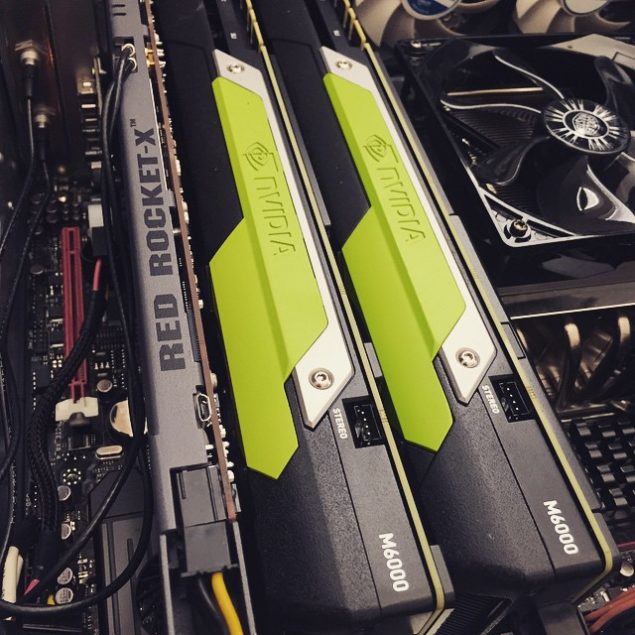 The pictures of the two Quadro M6000 were posted by none other than the official "Deadmau5" who is widely know for his electro music. He doesn't reveals any kind of information but seems to mention that the GPUs feature a insane amount of power which is expected from the flagship GM200 GPU architecture. The pictures do little to show or tell the exact specifications of the card but from the images, we can deduce a couple of things related to the design scheme of the card.

First of all, the Quadro cards are finally ditching the older cooler shroud design and going with the NVIDIA's NVTTM cooler design. That is right and in fact quite easy to spot from the images provided. The Quadro M6000 has the same cooler as the Titan X with the only difference being the color scheme and a few connector panel replacements for stereo and power inputs. The card comes with a single 8-Pin connector at the back of the PCB rather then at the side as on consumer cards. The card comes with a neat Green and Black color scheme with a black colored heatsink and cooler shroud. It features two SLI connectors to allow 4-Way GPU use in the most professional workloads. NVIDIA will also update the display configuration to DVI, HDMI and 3-Display ports which is the standard I/O configuration we see on current generation of Maxwell graphics cards.

Previously leaked specifications of the GPU show that the GM200 GPU features 3072 CUDA Core, up from 2048 on the current GM204 chip. Considering a Maxwell SMM has 128 streaming multiprocessors, there’s a total of 24 SMM units enabled on the GM200 chip which is going to be fused on the Quadro M6000 GPU. Aside from that, we are looking at 96 Raster operation units and 192 TMUs. The card has a pixel fillrate of 94.8 GPixels/s and a texture fillrate of 252.9 GTexels/s. The GPU’s clock speeds are maintained at 988 MHz and doesn’t feature GPU Boost although these could be preliminary clock speeds and could be changed in the future when the card is officially launched. On the memory side, we are looking at no less than 12 GB GDDR5 VRAM since it replaces the K6000 which featured the same buffer size. The card comes with a 384-bit memory interface and memory clock is maintaned at 6.6 GHz that pumps out 317.4 GB/s. With the launch coming soon on 17th March, we will see if we can get any more information prior to that on the new card. You can find a specification comparison posted in the chart below: 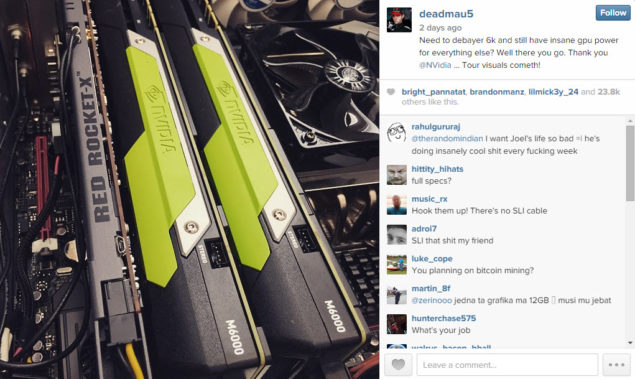