Dot Created a Smartwatch For The Blind

Research has been conducted for blind people in order to make information regarding world more convenient for them. But most of it has a major drawback that is it’s either very expensive or is not commercially released and marketed properly, so awareness amongst this sector is less. An Asian startup has researched and made a braille smartwatch that will make lives easier for the visually impaired.

The company behind this device is Dot, which is basically a South Korean startup and they are pretty sure that the Braille market is ready to be tapped. Dot will be providing the world’s first smartwatch that will serve as a communicating tool for the visually impaired; this watch will provide the necessary information to people who don’t have easy access to it. The watch consists of dots which can project four Braille characters simultaneously, and the controlling speed for all the characters can be customized according to the requirement and pace of the user depending upon how quickly they can respond. The World Health Organization has estimated that around 285 million people are visually impaired out of which 39 million are completely blind. So Braille education has a lot of importance.

“Ninety percent of blind people become blind after birth, and there’s nothing for them right now – they lose their access to information so suddenly,” said Eric Ju Yoon Kim, Dot’s co-founder and CEO, in an interview with Colin Moreshead from Tech in Asia. “Dot can be their lifeline, so they can learn Braille and access everyday information through their fingers, which is the goal of Braille literacy.”

“Every time technology moves forward we see more real-time information, but for the blind, that’s a widening discrimination gap,” explains Kim. “We are solving that information discrimination with the equal accessibility the Dot smartwatch provides.”

The watch provides every feature expected in an ordinary smartwatch such as an alarm, a messenger, a navigation application, Bluetooth connection, a stopwatch and lots of other features. The battery life is said to last up to 10 hours of active refreshing which means that the watch can run for a good five days of ongoing use before users need to charge it again. In addition to these features and great battery timing it also has a feature that normal smartwatches don’t have, which is that it can be turned into an e-book reader. The e-book reader feature is due to Dot’s active Braille display which is suitable for longer forms of writing. 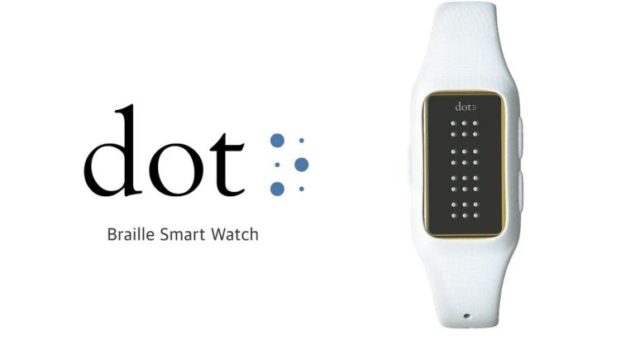