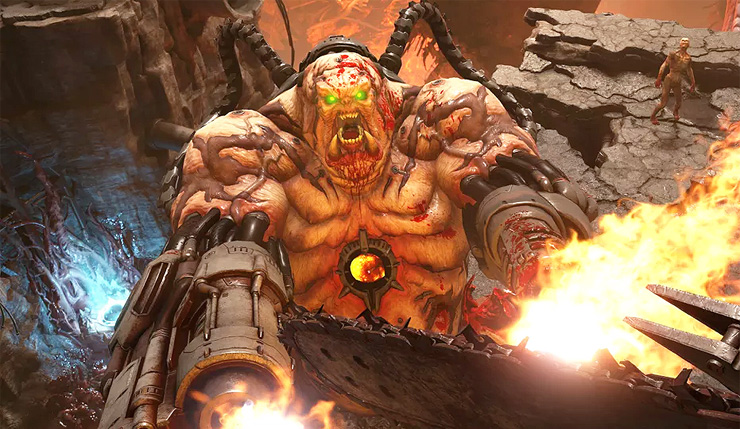 Back when Google Stadia was first announced, we were promised Doom Eternal would be one of the cloud gaming service’s showcase titles. If a fast-twitch shooter like Doom could work on Stadia, then pretty much anything could! Well, after a couple delays, Doom Eternal has finally arrived on Stadia, so is it everything Google promised? The tech heads at Digital Foundry have put Stadia’s latest to the test, and the results are rather mixed. If you’ve got 15 minutes to spare, you can check out their full analysis video, below.

Visually, the Stadia version of Doom Eternal is roughly the same experience as you would get on the Xbox One X, delivering 1800p resolution and similar effects and textures. That said, the detail and resolution of some distant objects has been reduced to more closely resemble what you’d see on base consoles like the Xbox One S. Stadia manages to maintain a mostly-stable 60fps with only occasional stuttering.

Unfortunately, contrary to Google’s grand promises, input latency is a fairly major problem for the Stadia version of Doom Eternal. Compared to the Xbox One X, there’s an additional 19-to-24-frame delay on Stadia, which translates to 79 to 100 milliseconds of lag. That may not sound like a lot, but in an action-packed shooter like Doom Eternal, it can make all the difference in the world. It should also be mentioned that Digital Foundry was playing the game with a top-of-the-line 300mbps wired Internet connection, so the lag they were experiencing was probably a best-case scenario. So yeah, the dream of being able to play demanding action gams like Doom Eternal without local hardware remains elusive.

Doom Eternal is available now on PC, Xbox One, PS4, and Stadia. A Nintendo Switch version is slated to arrive later this year. You can check out Wccftech’s full review of the game here.