Did Intel’s Raja Koduri Just Give Us Our First Look At The Xe HPG Gaming GPU?

Intel's Chief Architect Raja Koduri has posted what appears to be the upcoming Xe HPG GPU from Intel.  Raja is well known for dropping cryptic hints - some of which are deciphered almost instantly while some take months. Videocardz did a CSI enhance-enhance analysis on the image posted and sharpened up quite a few visuals for us as well as correctly noting that the benchmark was running a test that could only have been run on the HPG GPU.

I am talking of course about the DXR or raytraced 3D Test. The Intel Xe HPG GPU will feature a ton of new features including hardware-based ray tracing. This is the tweet that Raja posted and as you can see (if you enhance-enhance in enough), the 3DMark screen shows the DXR test on the extreme right side of the window - implying this is either the Xe HPG (aka DG2) GPU.

From 2012 to 2021 - same Intel Folsom lab, many of the same engineers with more grey hair , I was at Apple back then, getting hands on with pre-production crystalwell, 9 years later playing with a GPU that’s >20x faster! pic.twitter.com/RgmRJuhOXw

Here is a zoomed-in version of the actual GPU running with what appears to be a CPU cooler and a heatsink: 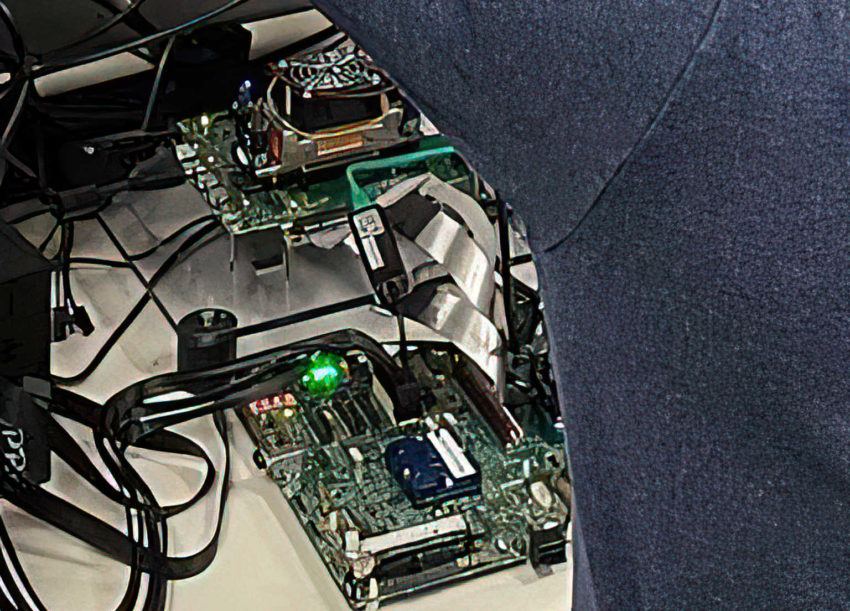 The GPU in question is on a test-board that features a high flow CPU-style cooler and heatsink. If Raja is teasing the GPU then we are likely looking at on-shelve availability in a few months. It took the DG1 roughly 6 months from going from the final prototype testing to being officially announced and if the same holds, we might see Xe HPG in some form before the year is over.

According to a tweet by twitter user Raichu (which has still been deleted), Intel's Xe HPG could have 960 EUs instead of the expected 512 EUs for the top-end model. This will increase the expected core count from 4096 to 7680 and also significantly increase the card's expected TFLOP rating if true.