Destiny is an upcoming most anticipated always online action role-playing first-person shooter video game developed by Bungie, the studio responsible for the birth of the multi-billion dollar Halo franchise. The game is expected to launch on September 9, 2014 for all major video game consoles except Nintendo Wii U. At this year's Electronic Entertainment Expo, Destiny made quite a splash. Here is something very eye catching from Destiny at Sony's E3 2014 show booth. 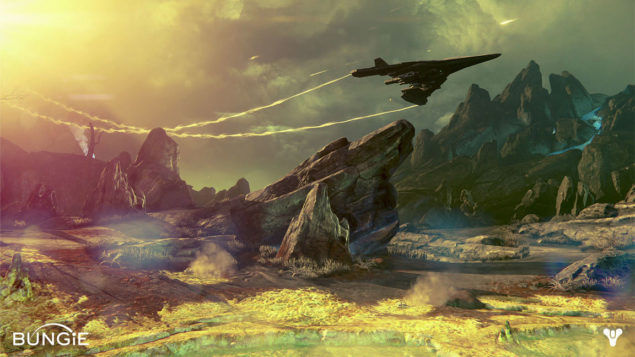 If you are a Halo fan, you might be able to attest that when it comes to carting jaw dropping in-game environments at massive scale, Bungie knows how to put things right. Destiny is one of several other video games by the developer which make you completely forget the real-world nature. The game is an open-ended first person shooter title that combines Halo-style shooting with role-playing game mechanics.

With many other truly innovative features, Destiny packs a whole new in-game world. The game is developed on a new engine that allows global illuminations and real-time dynamic lighting to occur together. Stunning in-game environments and highly complex characters are the main beauty of the game. The world of Destiny is said to be "alive" because the events that occur in the game are not necessarily under the control of the developer. The game holds a whole lot of hype around it and from the gameplay videos that are coming from E3 2014 show booths, it looks like Destiny is really something.

The sky in Destiny is said to be the most gorgeous thing in the whole in-game world, and looking at this time-lapse video that comes from Digital Foundry, it looks like the sky looks even more lovely in motion. Feast your eyes with the time-lapse footage of Destiny alpha running on Sony's PlayStation 4 console.