It's a fantasy hunting trip with your friends. Learn everything you need to know for Phoenix Labs cooperative monster slayer game, Dauntless, on PC.

Dauntless is a new free-to-play cooperative monster-slaying game that's looking to scratch that Monster Hunter itch with big boss fights and more loot than you know what to do with. The demo I played at PAX East had me team up with three other attendees as we worked together to take down Shrike, the killer owl. Armed with large weapons and a sense of purpose, we were dropped off on this mystical island where we needed to hunt down the deadly fowl.

After familiarizing ourselves with the controls, we moved on deep into the wilderness where the warrior was able to fire off a signal flare when Shrike was discovered.

Shrike would fly around and attempt to dive bomb us. After it landed, we pounced on it using combos and built aether-charged super attacks. Figuring out Shrike's attack pattern was quite easy and we made short work of him. We were told that that the next fight against Pangar would be more of a challenge, and holy hell, they were right.

We loaded into a new zone where our prey was Pangar, a giant armadillo covered in crystal plates. The trick to fighting Pangar was to make sure we gave him plenty of room so we can dodge his big roll attack then striking him when he fell off-balance.

If you played Monster Hunter, you'll feel right at home with the combat here with the notable exception that there was no target lock-on. You can just reset the camera by clicking the right thumbstick. The lack of lock-on targeting makes it hard to target specific body parts, which can dynamically change the course of the battle.

At some point, when it looked liked we were doing well, Pangar entered a rage-state where he somehow gained ice attacks and would call forth large ice crystals to box you into certain zones trapping you with Pangar with no room to escape. Thankfully, after consuming some timely healing potions, we were able to conquer Pangar. Dauntless left me with a favorable impression and I'm now curious to see what the rest of the game looks like, especially the social aspect of the free-to-play MMO.

We then had a chance to talk with Dauntless Executive Producer Jessie Houston about Dauntless as they demoed the game during PAX East 2017. Check it out below.

Wccftech: We just played some Dauntless, how would you best describe this game? It seems like we’ve getting some PSO and Monster Hunter vibes from Dauntless.

Houston: Dauntless is basically about becoming this bad-ass monster slayer together with your friends in this science-fantasy world where you get to take down these giant behemoths.

Wccftech: For PAX East, you’ve got a four-player co-op mode where attendees can face off against these two boss monsters. Could you tell us about offline mode?

Houston: Dauntless is a free-to-play MMO. There really isn’t an offline mode per se. You’ll come to central hub city of Ram’s Gate where you’ll do all your crafting and matchmaking. There will be 32-64 other players walking around, this is where you’ll have all your social experiences.

Wccftech: Could you tell us how you’re going to be handling character progression?

Houston: Basically, you can express how you want to progress through the game how they level up weapons, gear, and accessories. Each of these has different gameplay components. For example, each weapons class will have different combos and affinities to different elements. One character in the demo uses an Umbral Sword which is good for breaking off parts of monsters. Other weapons are good for dealing with armored enemies or adding in elemental damage. On top of that, there’s armor and accessories give active and passive abilities. This is a good way to further customize how you want to interact with the game.

Wccftech: We saw a bunch of melee weapons, any plans to add ranged weaponry to the arsenal?

Wccftech: Is there any way for players to change their loadout or respect if they have second thoughts on how they build their characters?

Houston: My happiest place will be is when people are going to be able to see that they will be able to hotswap their gear before fighting someone like Pangar where using a sword is more optimal. It’s really important to me that players be able to play the way they want.

Wccftech: These sorts of games live and die by their looting and crafting systems. Can you share some details about these systems?

Houston: Crafting is going to be built on gatherables and drops you get from behemoths with exploration elements. You bring back these materials back to the hub city where you can upgrade and create your equipment.

Wccftech: You mentioned during my demo that these boss fights could play out differently. How exactly can these battles change?

Houston: Pangar is a great example how if you focus on DPS, you’re going to have a harder time. Pangar changes form but the players do have some agency as to when you may him change forms. He’s got plates on his back that change color as he builds up energy. If you break off the plates, he’ll absorb less energy and he won’t use his ice attacks. There’s Drask, who’s this big lizard dude, who uses a large tail for a big attack. If you cut off his tail, he losses that attack entirely but gain some new attacks like an 180-degree pounce and puts him in a new enraged state. 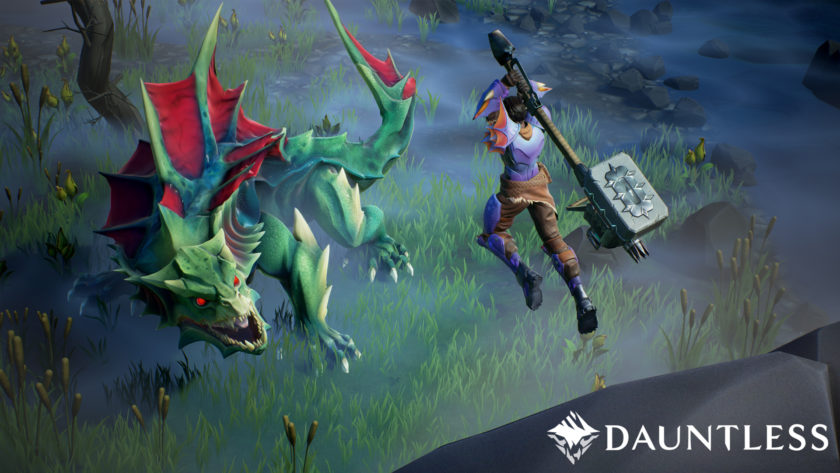 Wccftech: Does that mean since you’ll be cutting off parts, you’ll be able to earn different loot?

Houston: Anecdotally, over the holidays there was a rare drop that you can only get by breaking off essentially one of the butt cheeks of Shrike the OwlBear. It’s about a 5% drop rate on break. So I spent most of Christmas holiday trying to get this drop. (Laughs)

Wccftech: Are they any other monsters to fight aside from the big bads? Are there smaller mobs or other creatures you can farm?

Houston: There are smaller creatures like deer and wolves you find along the way. Our focus is to make the behemoths the stars of the show. You’ll know exactly who you are going up against. There will be some encounters where you won’t know what you’re going to fight which I think players would really enjoy.

Wccftech: What’s the release window and platform expectation for Dauntless?

Houston: Right now were in Alpha on the PC and we going to bring folks into the closed beta with an open beta coming later this year.

Wccftech: Finally, who’s been your favorite Behemoth to encounter?

Houston: Gnasher is currently my favorite. He’s basically a giant angry beaver so as a Canadian I feel especially proud he’s in the game.

Wccftech: Thank you for your time.

The trailer below shows off the PAX East fight against Pangar mentioned earlier in the interview. You can enlist for the upcoming closed beta and even reserve your preferred name here.