Crowfall Opens European Servers, Gets Andreas Weidenhaupt On Board

Crowfall is certainly one of the most interesting MMORPGs in development. Indie studio Artcraft Entertainment was founded by genre veterans Gordon Walton (who worked on Ultima Online, Star Wars Galaxies, The Sims Online and Star Wars: The Old Republic) and Todd Coleman (known for his work on Shadowbane, Pirate101 and Wizard101), who have a clear vision for the game, described by them as a Throne War Simulator. 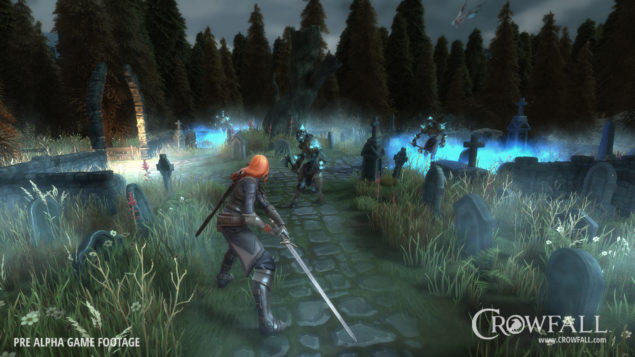 Crowfall raised $1,766,204 on Kickstarter, but the pledges have since continued on their official website and they are now at $2,351,260. One of the stretch goals achieved after the Kickstarter campaign involved opening European servers and localizing the game for additional languages; today, a press release announced that the first phase begins this week with the launch of a website and game server in Germany. The service will be expanded in the next months, with support promised for more territories and seven languages overall.

It's not a coincidence that Germany will get to be the first. In fact, the press release also announced that Andreas Weidenhaupt has been appointed to the company's formal advisory board and will serve as European consultant and overseer. Weidenhaupt has been in the gaming industry for over ten years; he founded German website OnlineWelten, then publishers Frogster Online and Infernum Productions.  He commented the news with the following statement:

When I first heard about Crowfall, I knew that I had to be involved. It is a great pleasure and an honor for me to work with the ACE team and to help them bring their first title to the European market. I am absolutely sure that the European gamers will be as enthusiastic as their North American counterparts are about Crowfall.

Andreas’ knowledge of the European MMO landscape has already proven to be invaluable in a very short time. We are fortunate to have someone of his caliber join our team as a means to demonstrate our commitment to Crowfall in the EU.

Crowfall is currently in pre-alpha testing, but the studio already gave the green light to some streamers and we've embedded some early footage below, along with an official video overview. We'll be sure to keep covering this intriguing MMO, so stay tuned for a lot more.