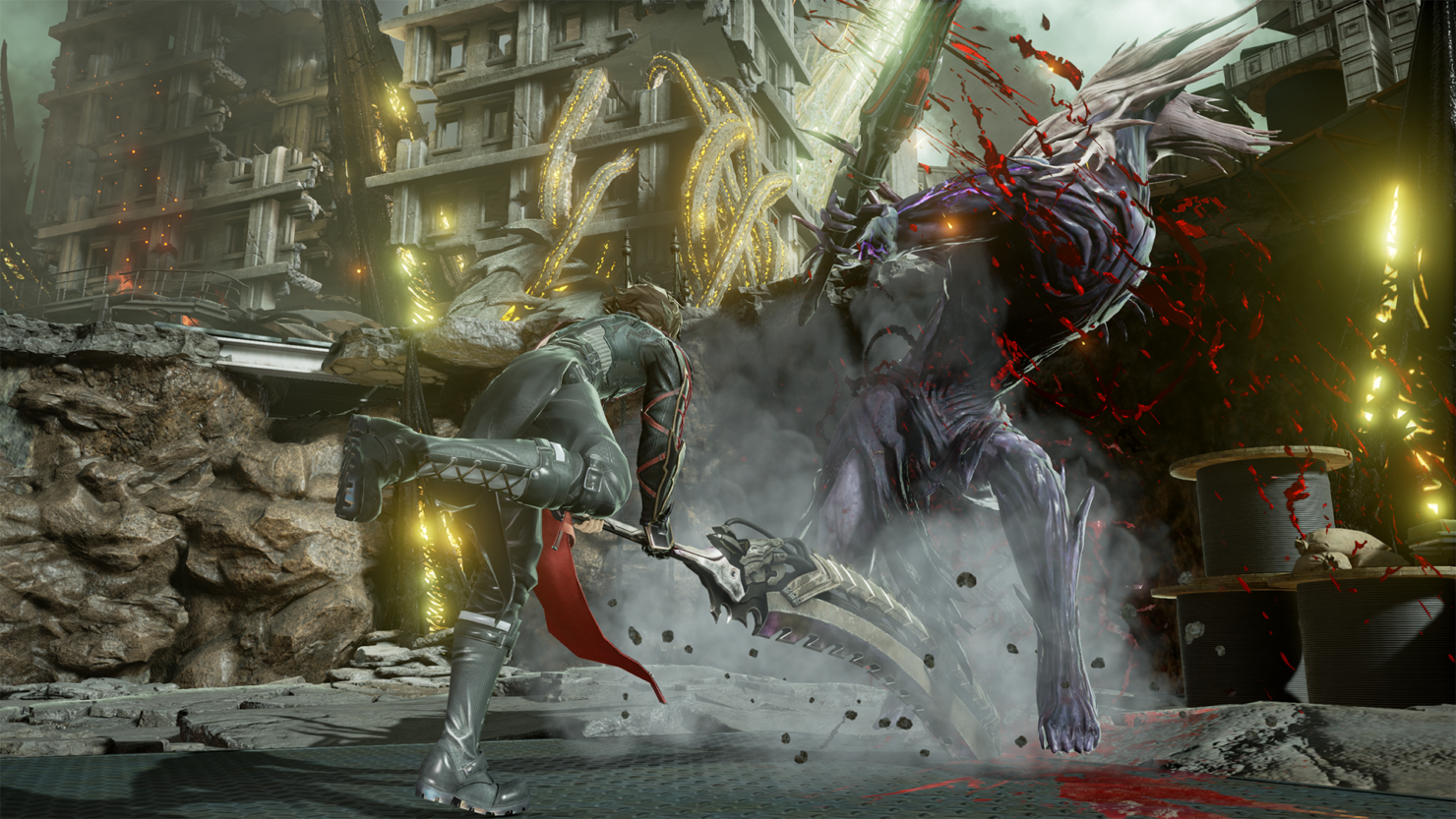 Lots of people have been describing Code Vein as ‘anime Dark Souls’ which has triggered a lot of discussion in the Souls community. While Code Vein borrows a lot from the Souls series, stating that it is anime Dark Souls is an oversimplification of both games. Code Vein is certainly like Dark Souls in a few respects, however, the game is far more complex than many have given it credit for. After spending a little while playing through the preview build, I began to notice the features that make Code Vein its own beast.

Spawning in a dark cave, next to a Mistle (the Souls equivalent of a bonfire), I was introduced to my character, along with my companion, Mia. Although not all of them have been announced yet, Bandai Namco Studios have chosen to include a number of companions to aid players as they journey through the broken world of Code Vein. It has not yet been confirmed if you can alter the appearance of your companions, however, you can alter your main character’s appearance if you wish to play ‘Fashion Souls’.

Code Vein’s combat borrows a lot from the Souls series to the point where Souls fans should be able to understand the fundamentals of the game with ease. You’ve got your standard roll, parry and guard for your defensive options. As for your offensive tools, you’ve still got a light and heavy attack as well as a backstab. Whereas Souls games have a relatively straightforward combat system (on paper, anyway), Code Vein is far more focused on action, giving players multiple options for attacking and encouraging them to master strong combos. 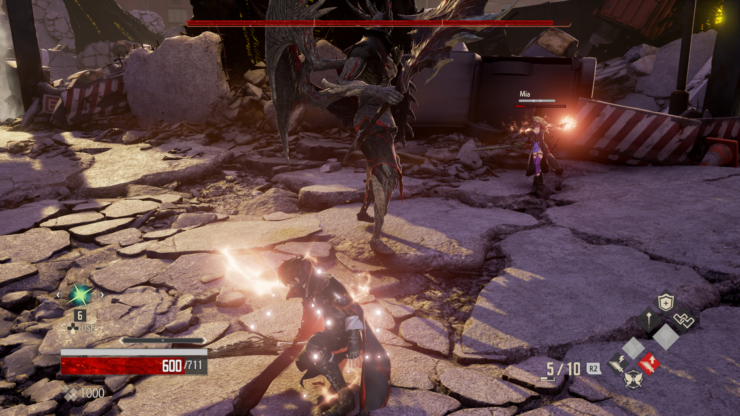 Unlike most games that force you to have a companion, Mia ended up being instrumental when it came to surviving. Every time I did something stupid, Mia would be there to sacrifice her health to bring me back to life. In a way, it felt as though my character was a burden to her instead of it being the other way round. Although companions are primarily there to aid you, they can prove to scupper your plans from time to time. On a few occasions, Mia stopped attacking the boss when I would have wanted her to distract it and when sneaking up on mobs, she frequently began attacking them before I had the chance to perform a successful backstab combo. I still believe that the companions will be more of a help rather than a hindrance and their independent nature will keep players on their toes, though players should be aware that they may have to change their game plans to accommodate the help.

Players will be able to build up their focus bar by successfully landing attacks on enemies. This bar can then be used to perform special moves that can link into combos and deal more damage. For example, activating the focus bar and pressing R1 & Triangle will launch an enemy into the air, which can then be followed up by a move that drains the enemy’s health and replenishes your Ichor (more on this later). Using charge attacks proved to be quite strong against regular mobs, although learning their charge time and range will take some getting used to.

Your character has eight spells (known as ‘gifts’ in Code Vein) at their disposal which they can cast using Ichor (mana, basically). While some of the gifts, such as the arrow and fireball are useful against common mobs, they will also be integral in boss fights. By default, your character starts with ten Ichor points, allowing you to use roughly two gifts at a time. Utilising charge attacks not only gives you Ichor, it also increases the amount of Ichor you can hold, capping at twenty. The gifts greatly differed, with a few of them serving as a means of direct attack (arrow; fireball), some serving as temporary buffs to my weapon (lightning; increased damage), changes that would affect my play style (a dash that replaced my roll; buffed defence; butterfly – low health but strong attacks) and arguably the most important gift for new players: trading half your health to your companion. Mia was also armed with similar abilities and had the power to donate health to me when possible. If you spend all of your Ichor, you will have to fight in order to gain more. There are items in the game that allow you to replenish your Ichor during a battle, though these are only a one-time use only so think carefully before using them. 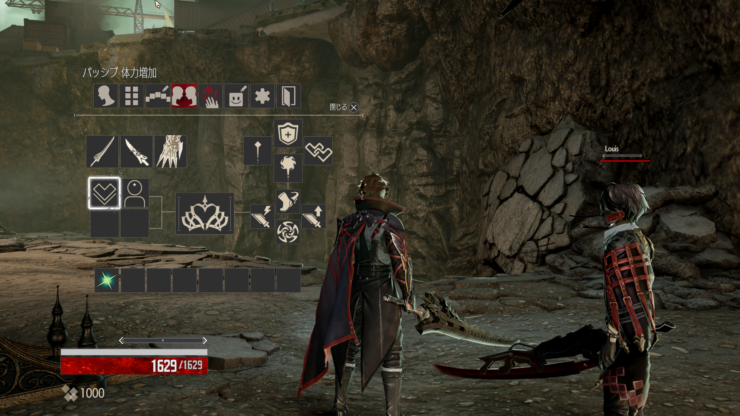 Battling the boss provided me with a good opportunity to experiment with the gifts system. The boss was a fast, humanoid figure with a large sword and shield. Its three phases saw it performing fast lunge attacks on the floor – launching itself into the air and slamming onto the floor –  then finally, sending out streams of fire. Thanks to Mia’s involvement in the boss fight, there were opportunities for me to heal up, spend my Ichor and attack the boss. I would have struggled to have beaten the boss without my companion, although part of that is also due to a few technical issues with the game in its current state.

It’s important to note that the game is unfinished and is most definitely subject to change, but these problems are still worth mentioning. The cast time for the gifts seemed unfairly slow against the boss. There were a number of times that I picked a gift, spent the Ichor and was then interrupted before the effect activated. Thankfully, this is something that the developer is already working on. Getting too close to an enemy (especially the boss) broke the camera multiple times, leaving it positioned at an awkward angle. This was also a known issue in Dark Souls, particularly when fighting in a small area.

The PlayStation 4 build of Code Vein made the four-year-old console show its age. Despite aiming for thirty frames per second, there were a number of frame rate drops that occurred throughout the preview. This wasn’t a big issue when fighting standard mobs, though it became a problem during the boss fight. It’s bad enough when you are having a tough time fighting a difficult boss, but having the frame rate plummet just as it sends a barrage of fire at you is incredibly frustrating. Again, these are issues that could disappear closer to the game’s launch next year. I’m hoping the developers utilize the power of the PlayStation 4 Pro and the Xbox One X to deliver a smoother frame rate.

Overall, I’m really impressed by what I’ve seen of Code Vein so far. As a huge Souls fan, I think this is the perfect time for a game like this. The changes that the developer has made to build on the Souls sub-genre look as though they will make the game more action-heavy, which is something that I personally prefer. This preview has only scratched the surface of Code Vein as I only played two percent of the final game - at least that’s what I’ve been told. This game is definitely worth keeping an eye on and I’m looking forward to seeing more of it in the next few months.

Code Vein is expected to launch sometime in 2018 for PlayStation 4, Xbox One and PC.