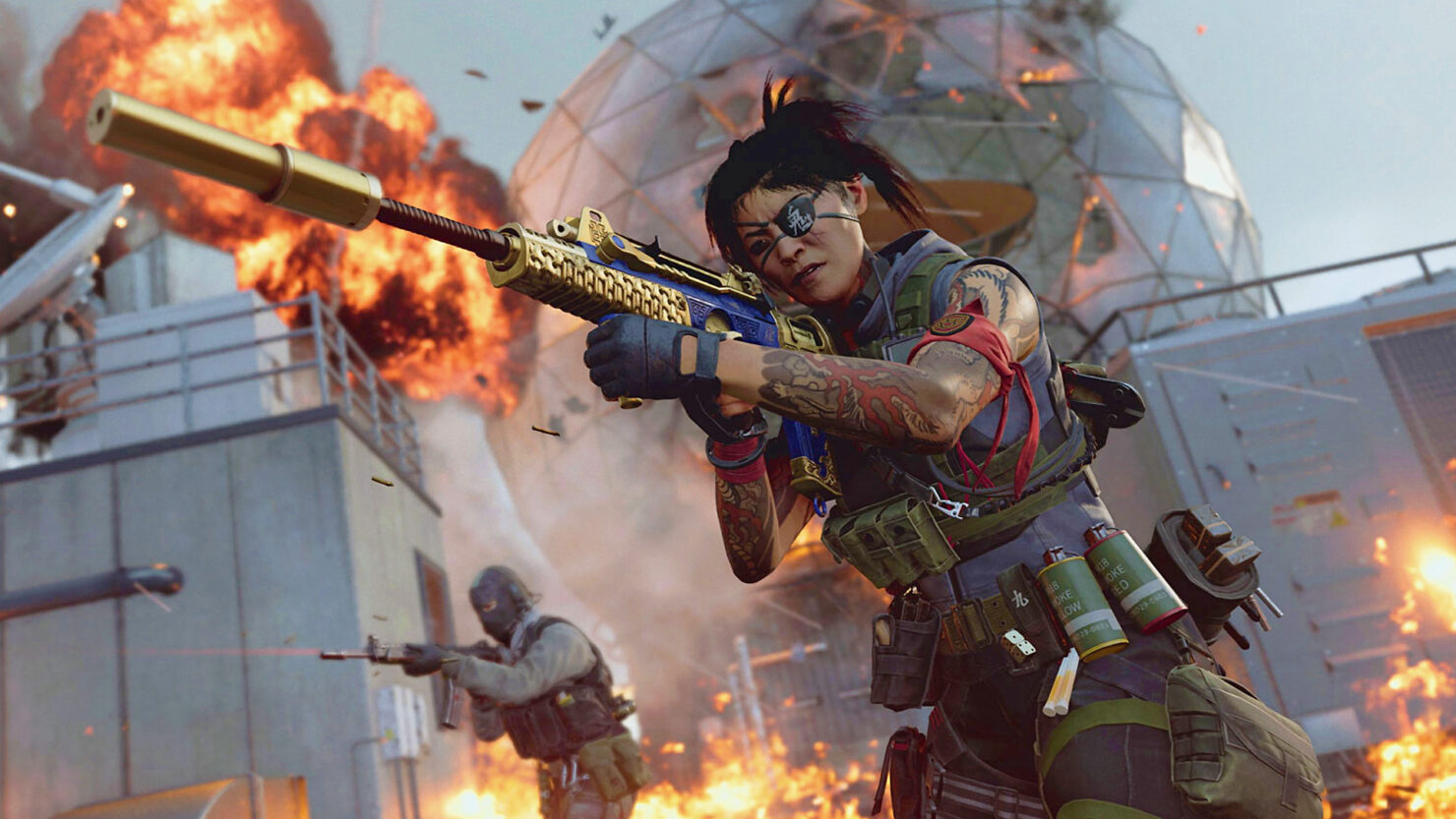 Call of Duty: Black Ops Cold War/Warzone Season 5 is almost here, and Activision and Treyarch have released details on the update’s new Double Agent mode, five new multiplayer maps, three new operators, and new Zombies and Warzone content. Speaking of the latter, between the Red Doors and new mobile broadcast stations dotting the map, the Warzone mysteries are multiplying. Rumor is Call of Duty WWII: Vanguard may be revealed via Warzone this month, so it will be interesting to see how that will be done. You can check out a trailer for Season 5’s new Double Agent mode, below.

Here’s everything you can expect from CoD: Black Ops Cold War/Warzone Season 5:

Become a Double Agent in the Newest Multiplayer Game Mode

The new Double Agent mode infiltrates into Season Five, an investigative Multiplayer party experience where each match assigns Double Agents who are there to sabotage the mission. Communicate, investigate, and expose the traitors – or successfully wipe out the investigating team – to win. It starts with up to ten players in a lobby who are assigned one of three roles:

Each player starts with a pistol. Weapons and Equipment are introduced in the Preparing Stage, where all players can grab weapons in different parts of the map. Each role gains access to unique skills and content during the round. Double Agents gain access to Gas Mines, Counter Spy Planes, Combat Bows, and Attack Helicopters, and also have protection from the radiation spreading from the bombs they’ve set. Investigators gain access to Trophy Systems, Stimshots, and Hand Cannons, and can see the footprints of an attacker when examining a player's death location. Investigators can also issue a Wanted Order on a player that they find to be suspicious.

Later in Season Five, the classic Demolition game mode makes its debut in Black Ops Cold War. Two teams battle it out as attackers attempt to destroy a pair of active bombsites, while defenders must prevent the detonations. All-out chaos ensues when time is extended after the first bomb site is destroyed, and you’d better be prepared with plenty of Scorestreaks and squadmates for backup should one final bomb be planted at the last second. 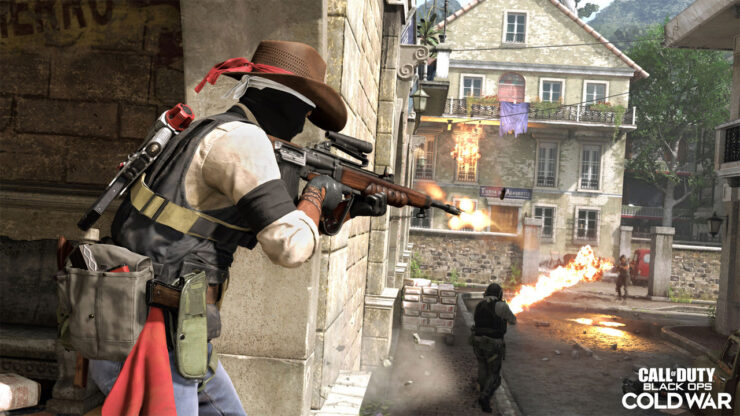 In this brand-new map seen in the Season Five intro cinematic, you’ll need to keep your ear to the ground if you want to leave this listening station alive. Set at Teufelsberg – also known as “Devil’s Mountain” – in Berlin, Echelon sees Operators fighting through the rain and ash in the aftermath of Perseus’ latest operation. From either infiltration point, you’ll fight to control the central control room inside the main dome, a natural hotbed for combat that gets even hotter in objective game modes.

Take to the streets and fight through this tight three-lane vintage map, which rounds out the three Multiplayer maps available at Season Five’s launch. First introduced in Call of Duty: Black Ops II, Slums is set deep within Panama City, where a town square featuring a central fountain invites long-range combat across lanes and plenty of aerial Scorestreak bombardments. Just be mindful of the sightlines into the parking lot and laundromat at the ends of this classic locale.

All sales are final in this small-scale map built for Gunfight and Face Off variants. Showroom is set in the cordoned off Stacks emporium within the long-abandoned mall in New Jersey, The Pines. On this map, expect to have fast fights over and around various displays and kiosks, which provide a unique aesthetic and map structure compared to the other smaller maps in Black Ops Cold War.

Shortly after the Season Five launch window, get your popcorn ready for the return of Drive-In, a cult classic from the original Black Ops, set in a movie drive-in out in an abandoned midwestern United States ghost town. Remastered for the first time in honor of its 10-year anniversary as part of the Black Ops Annihilation Map Pack, Drive-In features close-quarters fights and powerful overwatch points, particularly around the big screen of the Galactic Drive-In, where snipers and other long-range weapons can shine.

Rounding out Season Five’s trio of classic maps is another post-launch theater of battle: the intense 6v6 incarnation of Zoo from the original Black Ops, arriving later in the season. There’s no cage that can hold you as you fight through bear pits and aquariums in Zoo, whose original version was part of Black Ops’ second DLC pack Escalation. Be sure to take a “ride” on the monorail to get an incredible vantage point on the action below, or head to the souvenir shop to dole out plenty of free pain to your enemies.

With the DZ hotter than ever before, both sides have brought the heat to extinguish the opposition. A ranged incendiary device that is lost upon death (functioning in the same way as the Combat Bow or Hand Cannon), the Flamethrower shoots a steady stream of flame, immolating enemies within close range. 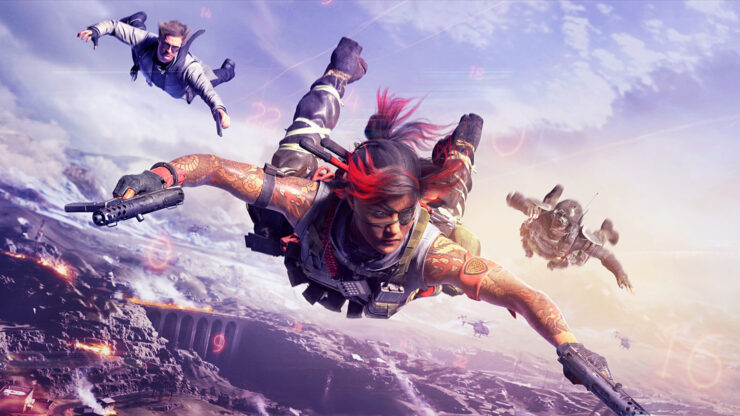 To help Stitch and Perseus bring about a new world order, this network of clandestine entities has deployed Mobile Broadcast Stations to boost the numbers signal all around Verdansk. As the name suggests, these mobile stations can be placed in a variety of locations in Verdansk, differing from match-to-match to keep one area from being signal boosted by the rewards they offer. See what they’re all about by going closer to them, but be sure to keep your head and tune out the broadcast each one emits…

At the start of the season, the Gulag sees an updated format as it converts into the classic Black Ops II map, Rush. Specifically comprised of the main speedball arena, Rush should feel right at home for paintball fiends who know how to dart from cover-to-cover toward their enemy.

A spiritual successor to Warzone Rumble is ready to bring 50v50 combat back into Verdansk during Season Five. Featuring select areas around Verdansk, Clash pits quads against each other in an unlimited respawn deathmatch to 200 points. Starting Loadouts are enabled, meaning you can level up your weapons and finish those camo challenges as you work to defeat the opposing platoon.

Whatever broadcast Perseus set up is causing the Red Doors to become more volatile than ever before, as Operators are now reporting [[REDACTED]] in their post-mission briefings. Beware of these doors sending you to locations other than the main room we all thought to be its lone destination point, and above all else, keep your head. This event may also have something to do with those Mobile Broadcast Stations seen around Verdansk… but at this time, we cannot declassify further intel for fear of double agents. 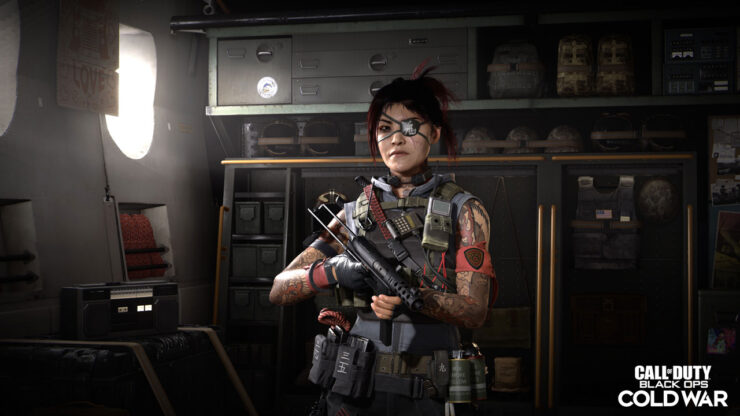 This Japanese cybersecurity expert and world-class thief is ready to make her presence known as a key Perseus operative in Season Five. Born in Kobe, Kitsune left her family’s organized crime past behind to join Perseus, aligning her values with that set by the new world order they are trying to install. Cautious, thorough, and effective, Kitsune relishes any chance she has to use her enemy’s tools against them.

Get access to Kitsune for use in Black Ops Cold War and Warzone at Tier 0 in the Season Five Battle Pass and unlock an additional Ultra-rarity Operator Skin at Tier 100. New to Season Five, a second, exclusive Kitsune Operator Skin can also be instantly unlocked with the purchase of the Battle Pass Bundle during the first two weeks of the season.

Accompanying Woods in response to the distress signal from the besieged NATO listening station, is Stryker – an ultimate one-man army, who represents the cutting edge of US Special Forces response teams. A soldier whose dedication to excellence borders on obsession, Stryker is the product of a 1980s Future Warfare program designed to combat test the synthesis of advanced technology and military expertise. Stryker offers a glimpse of the battlefield of tomorrow.

Later in the season, Adler’s old colleague and Weaver’s former CIA interrogation partner will arrive to help NATO across Multiplayer and Zombies. After having Adler and Woods handle the dirty work against Perseus, Special Agent Jason Hudson is set to take the fight into his own hands as he leaves D.C. to finish the fight in Verdansk, Teufelsberg, and even parts unknown within the Dark Aether. Get access to Stryker and Hudson as part of upcoming Season Five Store Bundle offerings later in the season. 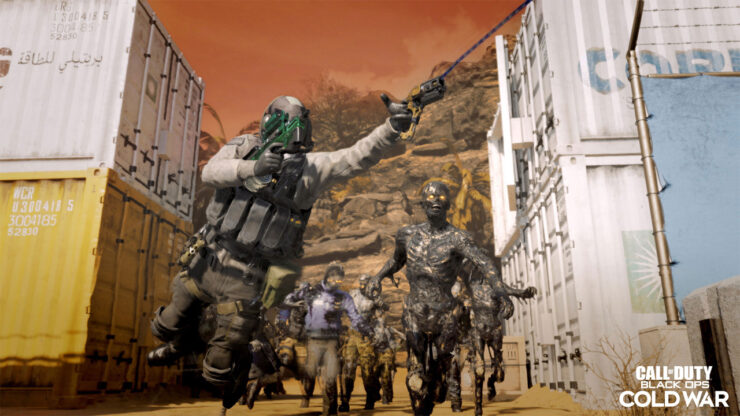 After the events in Berlin, Dark Aether Outbreak Zones have continued to appear far beyond Eurasia, with the latest site crackling to life in the Algerian Desert. This huge new region (codenamed “Collateral”) has become an incredibly unstable area, making it a prime spot to harvest Aetherium Crystals and further investigate the Dark Aether. Cut through the undead hordes among the massive natural rock structures, de-orbited satellite, and oil drills to complete all tasks set forth by Requiem, including a new vehicle-based Objective introduced in Season Five.

Players will encounter the all-new Transport Objective, which tasks you and your squad with ensuring an important drivable Requiem machine makes its way across the Outbreak Zone safely.

Need a bit more firepower than the FAV? How about a Tank straight from the Warsaw Pact? This new Outbreak vehicle is ready to blow holes in Ordas, Krasny Soldats, and everything else without a pulse with its massive cannon, available in several regions at the start of the season.

Outbreak players will also get access to a new Crafting Item in Season Five: the Grapple Gun. Getting around the Outbreak Zone becomes trivial with this handy device, allowing Operators to spend less time on foot and more time shooting zombies in the face. Visit the Crafting Table to get your hands on the Grapple Gun at the start of the season.

PlayStation players should pack their bags for Devil’s Mountain this season, as the Onslaught Orb looms over the plateau on the new Echelon map. Grab your partner and prepare to fight back waves of increasingly difficult enemies, making sure to pick up every last piece of new Intel along the way. Later this season, expect another limited-time mode to arrive in Onslaught, in addition to a new Weapon Blueprint and other surprises for PlayStation players.

Phew! That’s a lot of stuff! Having a hard time keeping all the Season 5 content straight in your head? Here’s a handy-dandy roadmap (click the image for full resolution). 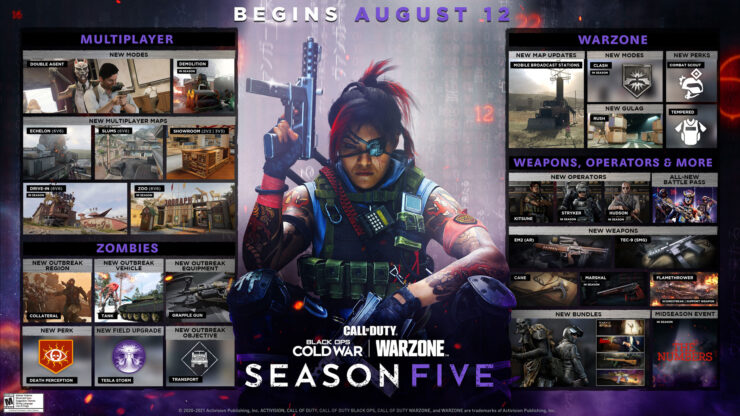