Blackberry Playbook lands in USA and Canada, up for grab

In the beginning of 2011, Motorola shocked everyone by announcing their first ever Android tablet which is also the first one to run Honeycomb, it's known as the Motorola XOOM. A lot of other manufacturers announced Android tablets i.e. Samsung, LG, Archos, Toshiba this year. Recently, Apple also launched the successor to the famous iPad which is known as iPad2 and is an amazing tablet. If you are thinking that RIM is hiding under a rock, then stop thinking that because they also announced their first ever tablet which is known as the BlackBerry Playbook. Today, RIM officially launched the tablet in USA and Canada where it's starting from $499.99. BlackBerry Playbook is available at official BlackBerry retailers in both countries. It is available at following retailers in USA and Canada. 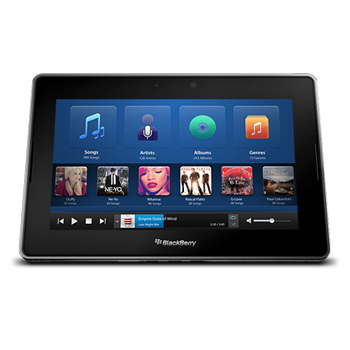 16GB version is available for $499.99, where as the 32 GB and 64 GB is available for $599.99 and $699.99 respectively. BlackBerry Playbook seems to be a good device. And it looks like that it will give iPad2 and other Android tablets a hard time. So who's looking forward to buy the Playbook, anyone?