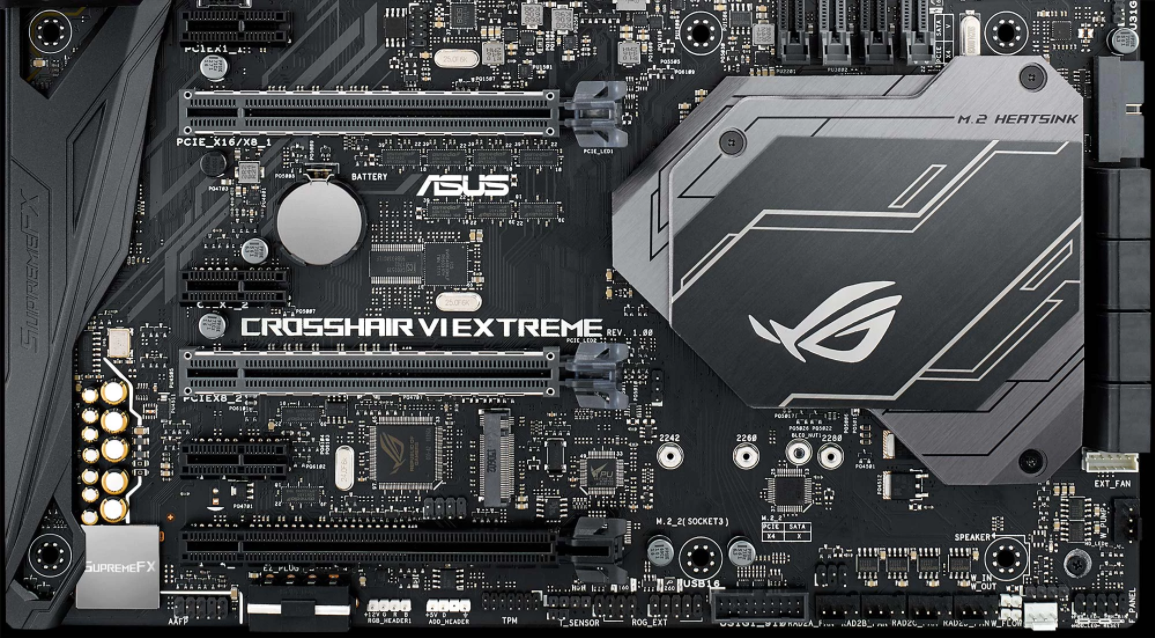 ASUS has just unleashed their fastest AM4 X370 motherboard for Ryzen processors, the ROG Crosshair VI Extreme. The motherboard is the latest in ASUS's lineup and also the flagship and features a handful of features which we can expect from a high-end product.

The ASUS ROG Crosshair VI Extreme is one of the fastest X370 motherboard which users are able to purchase as of now. The motherboard costs $349 US which might be on the high side of things but in return, you are getting a huge range of features which include better overclocking support, increased I/O capabilities and higher performance with improved compatibility. 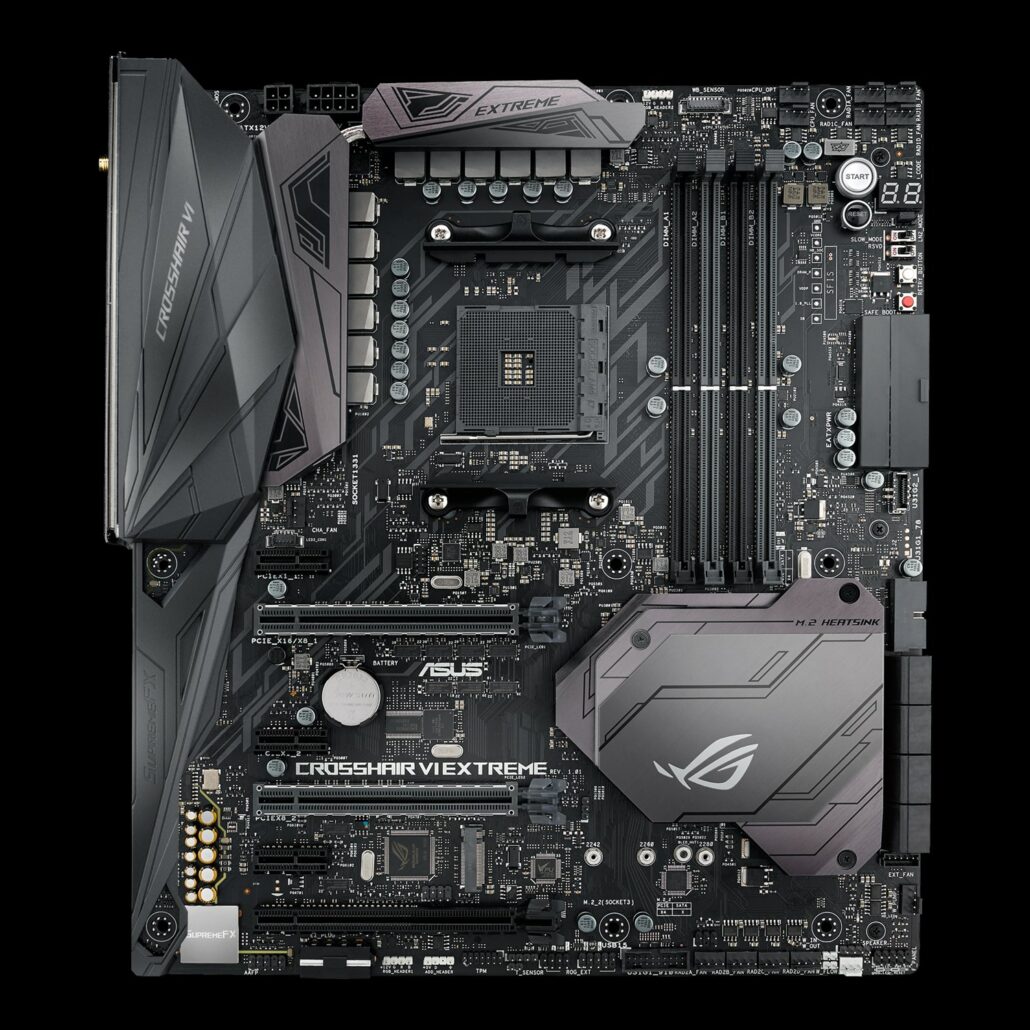 Starting with the specifications, ASUS has crammed the ROG Crosshair VI Extreme with a 12 phase VRM design. The socket is powered by an 8 and 4 pin connector configuration while the board gets power through a 24 pin ATX connector. The motherboard surprisingly, features a E-ATX form factor which shows that extra room has been made to accommodate more circuitry on board. One good thing is that the 24 pin connector is right angled which makes cable management easier. The VRMs are covered by two silver colored heatsinks with black texturing that incorporates heatpipe cooling.

Moving towards the side, we are looking at four DDR4 DIMM slots that can feature 64 GB capacities with speeds of up to 3200 MHz (O.C.). At the bottom, there are three PCIe 3.0 x16 slots of which two are full x16 and the last is running at x8 speeds. There's also three PCIe 3.0 x1 and two M.2 slots on the board which support 2242/2260/2280 type devices. The second M.2 slot is hidden beneath the PCH heatsink which acts as a cooling solution. The motherboard also comes with eight SATA III ports for storage and dual USB 3.0 front panel headers, one of which is right angled. 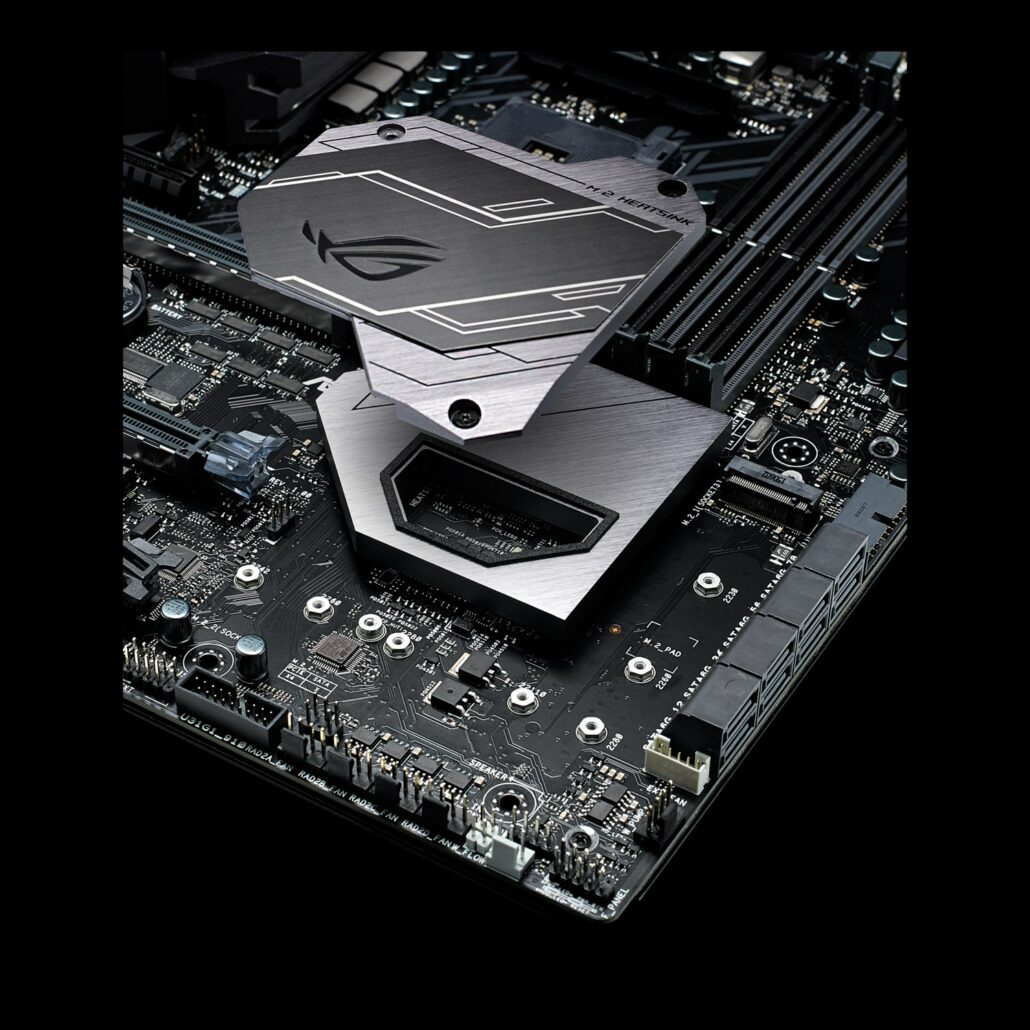 Other connectors include a USB 3.1 Gen 2 front panel header, dual RGB headers, T-Sensor port, ROG External port and a 4 pin auxiliary power connector to add more power to the PCIe lanes if need be. The board also features a SupremeFX S1220 codec that powers the onboard audio alongside a premium ESS Sabre DAC and the usual assortment of tweaks to improve the output and recording quality.

In terms of rear panel I/O, the motherboard has a BIOS Flashback and Clear CMOS switch, Wi-Fi antenna ports, six USB 3.0, four SuperSpeed USB 2.0, a USB 3.1 Type-A and a USB 3.1 Type-C port, Ethernet port, SPDIF out and five channel audio jack. One thing I liked about the I/O panel is that it is pre-mounted which makes installing motherboards to cases even easier. Additional things include a ROG backplate and support for Bitspower monoblock on the CPU socket. 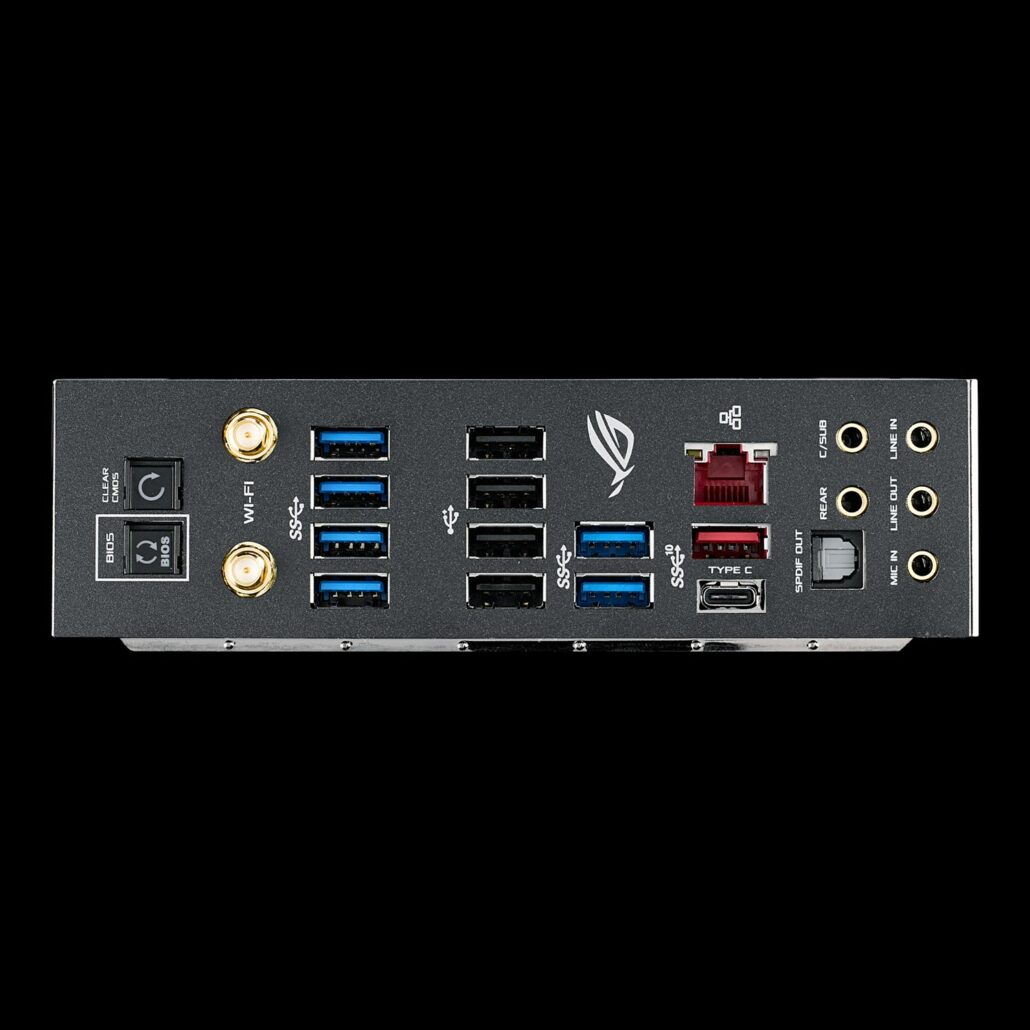 ROG engineers devote a lot of time to figuring out how to get the most out of each platform. You don’t need experience with extreme cooling to push the limits of your hardware, though. The Crosshair VI Extreme’s intelligent auto-tuner lets beginners overclock with a single click. This highly configurable tool accounts for the unique characteristics of each system’s hardware and cooling, making it valuable for even seasoned veterans who do most of their tweaking by hand.

Performance and overclocking are inextricably tied to cooling, so we’re constantly looking for ways to improve thermal management. For a high-end board like the Extreme, that means supplying everything needed for sophisticated liquid loops, starting with a special header for monitoring monoblock temperatures, flow rates, and leak detection circuits. ASUS has already partnered with the experts at Bitspower to produce a monoblock made specifically for the Extreme that will be sold separately from the motherboard.

All of the cooling is managed by our widely vaunted UEFI and FanXpert 4 software, a continuously evolving suite that provides comprehensive control through intuitive interfaces. Add extensive fine tuning options and sensor grouping, and you’ve got everything required to build a rig that’s whisper quiet at idle and only as loud as required by the situation.

A Refined Foundation for Coloring Your World

High-end builds won’t get a second glance if they don’t look the part. The aesthetics have to be just right, and your lighting better be on point. Our designers used a monochromatic palette that won’t conflict with other components or your choice of accent lighting. RGB lighting is expected at this point, but the Extreme doesn’t just add some bling and call it a day. It’s one of the first motherboards with a header for addressable light strips and that offer control of each individual LED.

Thanks to Aura Sync, you can match colors and effects across a complete family of compatible components that covers every aspect of your rig, both inside and out. And with our new Aura SDK, developers can integrate the lighting with games and other software, opening up exciting possibilities for cosmetic and functional flourishes.

Order One With Everything

The Crosshair VI Extreme has all the attributes of a premium motherboard. The dual PCIe x16 slots feature ASUS SafeSlot that reinforces the slot with metal bracing and additional solder to prevent damage from rough handling. They’re spaced to give 2.5-slot graphics cards like the class leading ROG STRIX GeForce GTX 1080 TI ample breathing room, and a third x16 slot is available for three-way CrossFireX with dual-slot cards.

A full slate of USB connectors stands ready for an army of devices. You can hit speeds up to 10Gbps with USB 3.1 Gen 2, which is available through an internal header for cases and via both Type-C and Type-A ports at the rear. The integrated networking gives you an ultra-reliable Intel controller for wired Gigabit Ethernet, and an 802.11ac module with an upgraded 2×2 antenna for Wi-Fi. Wireless connectivity also extends to peripherals with Bluetooth 4.1, so all your bases are covered.

Our latest SupremeFX S1220 codec powers the onboard audio alongside a premium ESS Sabre DAC and the usual assortment of engineering tweaks to improve the output and recording quality. You don’t need a separate sound card to produce pristine audio for gaming and streaming. You will, however, need a virtual reality headset to take advantage our new HRTF-powered audio effects for VR.

The ROG Crosshair VI Extreme is a true heavyweight among AMD Socket AM4 motherboards. It’s loaded with features designed for the PC gaming enthusiast and serious overclocker without sacrificing one for the other like so many competing products. It is this attention to user needs that defines the Crosshair VI Extreme – and the hallmark of ROG engineering and design.